Imagine you're at a food bank outside the First Unitarian Church in Los Angeles. It's a clear and hot Saturday in August. Dozens of hungry people are lining up. The woman who runs the food bank is overwhelmed. She yells people's numbers quickly. "There are too many people," one woman complains, as she stands in line, her arms crossed. Others wait patiently, but the mood is tense.

Then someone in line collapses to the ground -- a seizure. People surround him, trying to figure out what's wrong. A woman calls 911, but her English isn't great, and she has trouble communicating with the dispatcher.

Amid this pandemonium, another person runs to the front of the line to steal food and ravage supplies. Yelling, pushing ensues. The moment seems to last forever as you wait for the ambulance to arrive, to help the man on the ground.

Finally, it does. "Are you a doctor?" an EMT asks someone kneeling near the collapsed man. "Then get out of the way." The man, it turns out, was diabetic. He hadn't gotten food in time and had slipped into a coma.

Then everything freezes. The buildings fade away, the people on the scene become translucent. The sidewalk goes on forever. An infographic appears: 1 in 6 people in America are hungry, it reads. 1 in 5 are children.

The scene you just witnessed is one you can relive over and over again, in real time, thanks to Nonny de la Peña, a former Newsweek correspondent and documentarian who has been attempting to combine both her trades in a rather startling way.

She and her collaborators' newest piece of virtual reality journalism, "Hunger in Los Angeles," which was on display at the Sundance Film Festival last week, lets you strap on a helmet and participate in the scene at the food bank yourself. It's part of a long-term project called "Immersive Journalism," which de la Peña had been working to develop as a Senior Research Fellow at the USC Annenberg School for Communication. The project was commissioned by the Annenberg School, in conjunction with MxR Lab, a joint lab between USC's Institute for Creative Technologies and The School of Cinematic Arts.

In "Hunger" you can move around the area as you like and interact with other people on the scene by approaching them; the closer you are to someone, the better you can hear what they're saying and watch their very realistic movements. You can even move away from it all, walking further down the sidewalk, all the while hearing the eyewitness account of the actual event, which was recorded live in August of 2010.

People (non-actors) were strapped into motion capture suits to help build the human elements of those waiting at the food bank, and de la Peña and her collaborators spent months looking for the right piece of audio to accompany the visuals.

"I knew I wanted to build a piece about hunger," she said, "but the thing about these immersive journalism, virtual reality pieces is if the audio doesn't work then there's nothing. It won't feel real. So we capture this audio and then we build around that audio and recreate the scene."

At this point, the graphics look as if they're out of a Playstation game, circa 1997, but that's only because de la Peña barely scraped together enough money to put this project together, and it took longer to develop than it might have. "I literally built the thing for under $600," she said. "I had to beg, borrow, but I had access to incredible equipment."

If she had more funding, she says, then the graphics could look as lifelike as a modern computer game, or perhaps better.

Still, participants' reactions to de la Peña's project at Sundance were quite emotional.

"It has been astonishing," she said on Friday. "People are coming out crying, freaked out, upset, asking 'What do I do? How do I help? Why didn't anybody help the guy when he had the seizure?' You can trick your mind into really thinking you're there. That's the thing with these head-mounted displays."

A previous outing with this type of immersive journalism placed the participant in a detention center at Guantanamo Bay as a sort of "Second Life" experiment, where viewers could create a virtual replica of themselves. Vanity Fair reported that "one visitor to 'Gone Gitmo' felt so threatened by seeing her digital doppelgänger detained that she pulled out a virtual baseball bat and started taking swings at de la Peña’s avatar.'"

Another "head mounted display" virtual reality project of de la Pena's had the participant create their avatar, place their hands behind their back, sit down in a chair, and listen to a recorded interrogation with a terrorist suspect through a wall. They sat like that for twelve minutes.

Other similarly interactive projects have been in the works as well. "Darfur is Dying," which was created by USC students in partnership with the Reebok Human Rights Foundation, the International Crisis Group, and an MTVU contest, is a "viral video game" that seeks to illustrate various experiences of aid workers and the Sudanese people. In one of the game's exercises, you choose a Sudanese villager -- animated like a Nickelodeon cartoon -- and attempt to "forage for water" while militia vehicles roam the area. If one comes too close, you can press the space bar to hide behind a bush or a rock as they pass by.

De la Peña and her collaborators are working on iPhone and iPad apps that might have a similar effect -- albeit a less enveloping one -- as the virtual reality experience. Although other live exhibitions of "Hunger" could be in the works over the next few months, this is a way to help this style of immersive journalism to reach a wider audience. The goal is to make journalism as personal, and real, as possible.

"This project allows you to actually walk down the street with a journalist on the scene," she said. "You can actually be there." 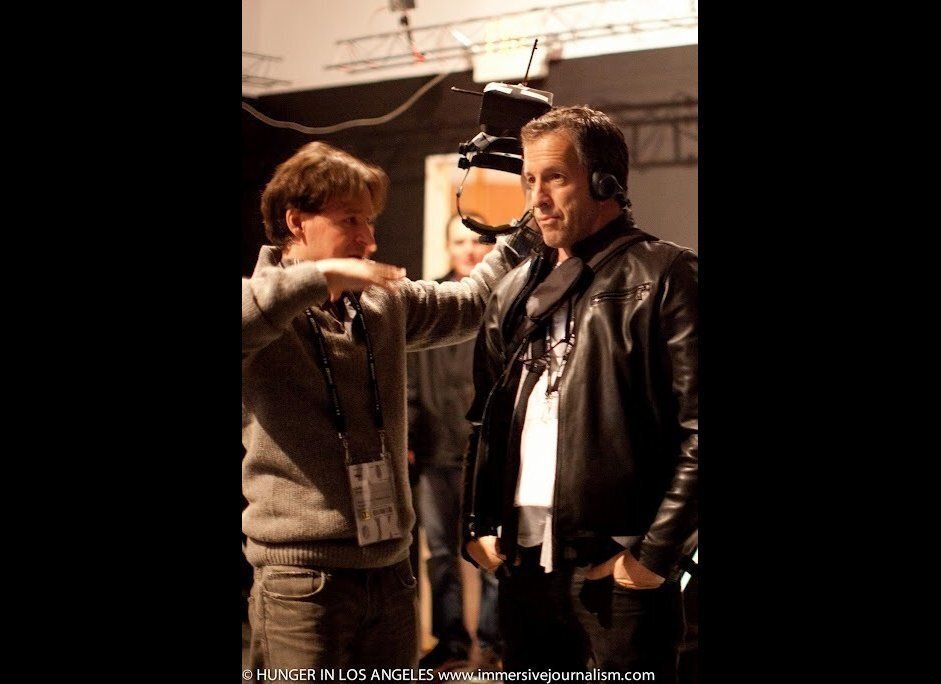