Turks starved hundreds of thousands of Armenians to death in 1915. It was Armenia's Great Genocide.

My grandfather was his family's sole survivor as the genocide hit; the rest died of starvation.

Hunger is not new to Armenia.

But for so many in today's modern societies, it's impossible to imagine what it's like to be hungry -- I mean really hungry -- compounded with neverending pain and suffering. Not being able to feed your own children, like many face in Armenia, is burdening with feelings of great stress and failure.

Children around the world can relate to being deprived of this essential life component. Cayden Taipalus, an eight-year-old student in Michigan, was encouraged to help a classmate when denied a hot lunch (but offered a cold one) because he had more than $5.00 of debt on his school lunch account. After being witness to this traumatizing experience, Cayden raised money to pay off not only that one child's debt, but every student's debt at his school. His campaign soon went viral and raised more than $14,000.

Today, food is a centerpiece to the Armenian heritage, but it now has a much more positive connotation. Recently, my work to fund needy Armenian children has centered around food.

Orran, which means "haven" in Armenian, is an after school program for the country's most vulnerable children. It also serves as a soup kitchen for the elderly. It costs Orran $500 to feed one child for an entire year. Between its two centers, Orran spends more than $100,000 annually to provide meals for more than 250 children and elderly.

Hunger and shelter were the main drivers that encouraged Orran's founders, Armine Hovannisian, and her husband, Raffi K. Hovannisian (first minister of foreign affairs of independent Armenia) to open the center in 2000.

Upon entering the program, children arrive hungry and weak; their growth is stunted by lack of nutrition. 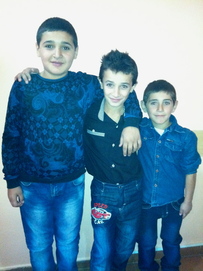 When a trio of brothers arrived at Orran last year, each boy ended up eating three servings of food for the entire first month just to make up for the nourishment they lacked for so long.

With food being a necessity in our lives, it becomes the centerpiece of everything we do.

A recent cooking day with my cousin allowed me to learn the recipes to my favorite Armenian foods. She introduced me to manti (meat and pastry dumplings), kololak (meatball soup) and kata (sweet bread). A visit to Alvard Barseghian's will always include plenty homemade treats, plus a doggie bag (or several large containers) to take home. My favorite part of the visit though was the chance to sit down with three generations (Alvard, her mother and daughter) over traditional Armenian coffee. The history and camaraderie felt during this ritual is a cherished moment that takes me back to a simple life. 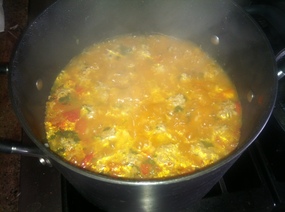 Another Armenian cooking experience I had was a kufta-making party at the Aghajanian's home. Kufta is lean ground meat mixed with cracked wheat made into a meatball with ground meat inside. Our host for the kufta-making party, Michael, grew up in an Armenian suburb in Boston and continues one of his favorite family traditions of large gatherings in the kitchen with everyone cooking together. 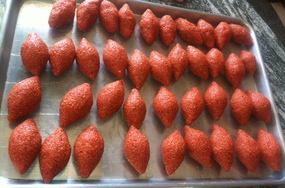 Today, food can be a vehicle for helping to feed those who cannot support themselves.

Last week, Hopscotch, an upscale diner in Oakland, Calif., hosted a dinner to raise money for Orran's children, allowing the charity to keep all of the ticket proceeds.

That evening, Armenians and non-Armenians enjoyed exceptional food and drinks, and more importantly, generated $1,000 in donations, which means that two more Armenian children will not go hungry this year.

While my work is to raise funds to help indigent youth, I also seek to achieve another goal: Using food to raise awareness of supporting those who don't have it. Everyone can relate -- those who have it can help those who need it.