While seeing an alligator is never too much of a surprise in Florida, the number of close encounters has jumped in recent days and it’s likely due to a combination of hunger and lust.

A family in Fort Myers was awakened by an eight-foot gator in their lanai in the middle of the night last week, police said on Facebook. In another part of town, a motorist captured footage of a massive gator casually strolling along a busy road:

With the mating season underway, the randy reptiles tend to be more active. But one expert told local media there was more to it than that. The weather is getting warmer and the higher temps speed up the reptiles’ metabolism and make them hungrier.

“They have to find some food so that’s when we’ll find them on sidewalks and people’s pools,” Brian Norris of Florida Fish and Wildlife told Fox 4 in Fort Myers. “They’re really just out there browsing around.”

Some might even be looking for chicken. A motorist in North Port had to call the cops after coming out of a chicken wing restaurant and finding a gator under the car:

Over in Polk County, a gator turned up just outside a local jail.

In Palm Beach Gardens, a 300-pounder managed to go for a swim in a family’s swimming pool despite the fact that the yard was completely fenced in, CBS12 noted.

At St. Andrews State Park in Panama City, a woman fishing for mackerel also caught something else: footage of a gator emerging from the water for a little R&R on the beach.

And last month, authorities apprehended a three-legged alligator measuring 12 feet and weighing 650 pounds. It was estimated to be between 60 and 70 years old.

Expect to see more gators out in the open and on the prowl. Florida Fish and Wildlife said the creatures begin courting in April, then get busy mating in May and June. 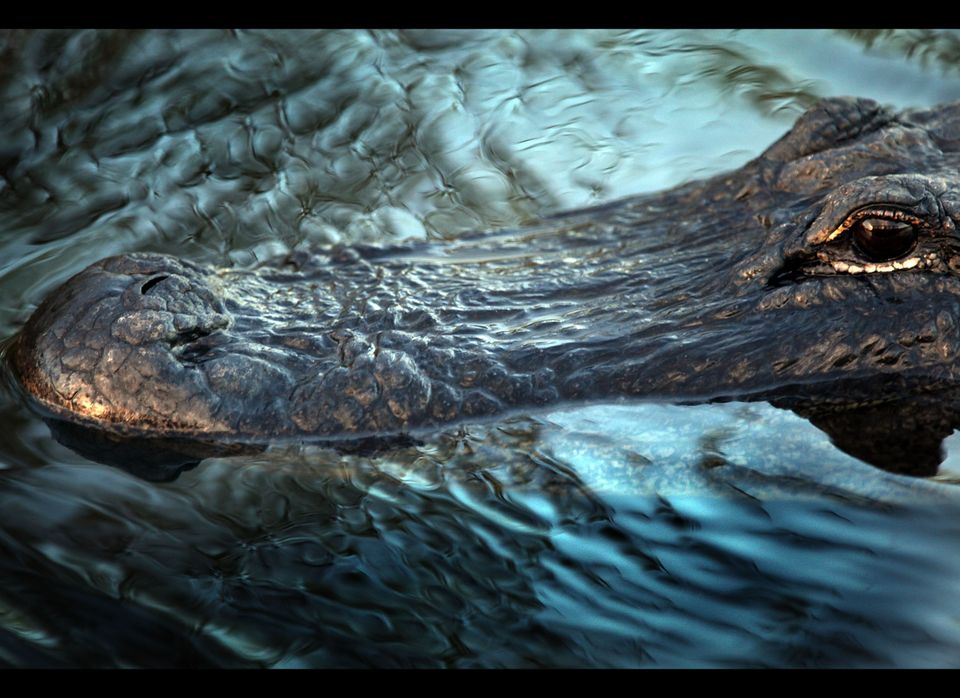 1 / 9
Florida Scales Back Everglades Sugar Land Deal
EVERGLADES NATIONAL PARK, FL - AUGUST 05: An alligator floats in a pond in the Florida Everglades after the South Florida Water Management District announced it may reduce the size of the deal it had announced earlier in the year with U.S. Sugar on August 5, 2010 in the Everglades National Park, Florida. The original proposal, announced in 2008, was to buy all of the U.S. Sugar Corporations assets and use the land to replenish the Everglades, letting water from Lake Okeechobee run its natural route. The plan now because of state budget cut backs is to buy 26,800 acres and retain a 10-year option to buy the rest of the land. (Photo by Joe Raedle/Getty Images)
Getty