A little-understood but devastating beetle is infesting trees in commercial avocado groves, botanical gardens and backyards in Southern California. The bug, shown right, is smaller than a sesame seed but can drill through a tree's outer layers. It leaves holes in the bark, so the plant looks like it was used for target practice. When the beetle gets to the heart of the plant, it deposits a lethal, and equally mysterious, fungus.

This pest combo -- the bug and its fungus -- has probably been lurking for several years, ignored and misidentified as it gained a foothold in Los Angeles and Orange counties. Earlier this year, scientists from the University of California, Riverside (UCR) determined that the beetle was a hitherto unknown species and proposed calling it the polyphagous shot-hole borer. In case Greek is not your strong suit, polyphagous means "eats many things," said botanist Jim Folsom, director of the legendary Huntington Botanical Gardens, in San Marino, Calif. Folsom is shown here pointing out the bug's telltale black-rimmed holes in one of The Huntington's English oaks. 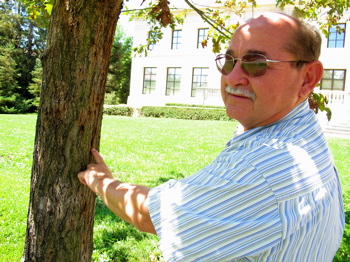 In backyards, the borer has also attacked citrus trees, grapevines and persimmons, noted Akif Eskalen, the cooperative extension plant pathologist who discovered the pest and took it to a UCR colleague, entomologist Richard Stouthamer, for DNA analysis. "We don't know how it will behave when it gets into the big monocultures [one type of plant grown over a large area] of these crops," Eskalen said, adding that there's no sure remedy at the moment, so if the polyphagous shot-hole borer takes hold among commercial crops, it could have serious economic impact. 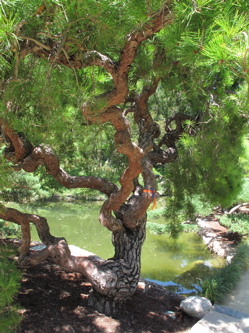 An August 2012 scientific conference at UCR increased awareness of the pest -- at least among scientists -- but resulted in little consensus about what to do. And research is moving slowly since only a limited amount of funding (from the California Avocado Commission) has been available.

Because a botanical garden contains a huge number of species, The Huntington and two other public gardens in the area offer vast buffets for the omnivorous invader. As a result, Folsom and his associates have front-line seats for the apocalypse. They see the damage spreading and wonder what will happen to the world beyond. "This borer seems unchecked among woody plants -- that is, trees and shrubs," Folsom said.

(More of The Huntington's affected plants are shown here; right, a weeping Japanese red pine flagged for an experimental treatment; below, the tallest of these stately palms; and, at bottom, a Canary Islands dragon tree, one of the site's oldest specimens.)

When I arrived at The Huntington one recent morning, the horticulture team was ready to rumble. "A tree's lifespan may be hundreds of years. We rarely replace one, but we may now be looking at replacing almost all of them -- thousands of trees," Folsom told me. "This bug can drill through a four-foot-diameter trunk."

I climbed into his white pickup truck, and he piloted it along narrow roadways, pointing out elements of the exquisite century-old landscape -- including the Japanese, Chinese, Shakespeare, Desert and Palm gardens -- while noting damage to trees throughout the 120 acres that are open to the public. 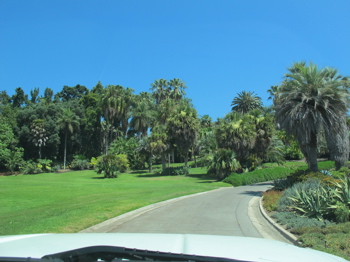 We caught up with a posse of gardeners experimenting with remedies OK'ed by California's agriculture department. "Try injecting the sweet gum in the Herb Garden," ordered Folsom, before heading his vehicle down another path.

In addition to injecting chemicals into plants, the garden's staffers have cut off infected branches to see if that slows down the pest. This solution may seem obvious but is not necessarily the right one, said Tim Thibault, The Huntington's curator of woody collections. The female borer likes to return to infected trees, so leaving a few sick ones as "traps" may end up being a better solution.

"We're working closely with the research community, but so far no one is sure what to do," said Folsom.

The beetle arrived in Southern California from parts unknown, maybe Africa or Asia, possibly via a wooden shipping container, said Thibault: "It was first noticed in the environs of the Port of Los Angeles and seemed to spread from there. Just two percent of arriving cargo is inspected, and odds are good a tiny bug can make it through without detection." Destructive pests commonly arrive via shipping or when travelers bring home plants -- even healthy-looking ones, said Eskalen. 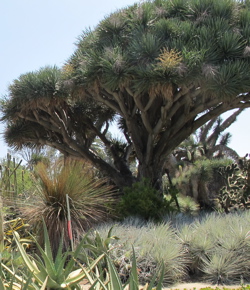 At The Huntington, the polyphagous shot-hole borer seems most attracted to species growing in relatively moist areas. That means Southern California's watered urban areas and croplands may sustain more damage than its semi-arid natural habitat, though the latter is not immune, Folsom said. Once the beetle establishes itself, the infestation moves quickly -- about 20 kilometers a year, according to Israeli scientists who've monitored the borer since it was found in Israel's commercial avocado orchards in 2009.

"We at University of California, Riverside are worried," said Eskalen.

"We're moving into a tumultuous time," commented Folsom. "It's well-known that pests are traveling beyond their original ranges. Generally, they're shifting north as climate change means fewer long cold winters that would kill them off. Over a matter of decades, we're seeing changes that used to take billions of years."

Even worse, according to Folsom, the United States has fewer resources to cope with the accelerating transformations. "Thirty years ago, teams of government scientists would have shown up here if we'd reported this kind of infestation. Those who are left are doing amazing work. But there just aren't enough of them. In this country, we have a stripped-down force facing one onslaught of pests after another."

Said Folsom: "We humans are in charge of the earth, and we don't have a clue."

Photograph of the polyphagous shot-hole borer by G. Arakelian, provided courtesy of The Center for Invasive Species Research; other photographs by Stephanie Woodard.