It's one of the rare but fatal diseases that relies solely on one's genetic makeup, leading to one of the scariest questions 200,000 Americans today must ask:

Have I inherited Huntington's disease?

The Lion's Mouth Opens, a new documentary from acclaimed director Lucy Walker, tells the story of Marianna Palka, herself a director and actress. It follows her journey of asking this life-defining question as she undergoes the genetic test to see if she, like her father, will face HD in her future. Here's the trailer for the short film:

Huntington's disease is a serious genetic disorder that causes the progressive breakdown of the brain's nerve cells. It deteriorates a person’s physical and mental abilities when they're relatively young, between the ages of 35 and 44. It's fatal, and currently has no cure. And if one of your parents has the disease, you have a 50/50 chance of carrying that faulty gene and taking on the same fate.

There are some 30,000 Americans struggling with symptoms of HD. Those who experience it have said it seems like having ALS, Parkinson's and Alzheimer's, all at the same time.

This infographic, released in conjunction with the film, contains some of the most important facts about the genetic disease and steps that can be taken to raise further awareness and support much-needed research: 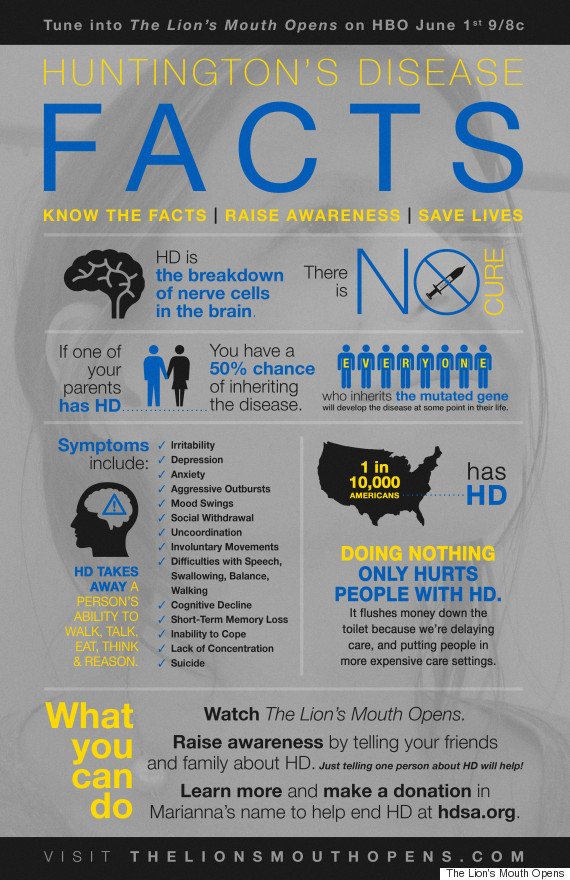 Sources: Huntington's Disease Society of America and The National Institute of Health

More:
brainhealthy livingmindbrain healthdisease
Newsletter Sign Up
The essential guide to taking care of your mind and body
Subscribe to HuffPost’s wellness email
Successfully Subscribed!
Wellness delivered to your inbox