During Hurricane Sandy, I heard the howling of the wind and the driving rain outside my studio in Toronto. Sandy was hitting Toronto hard, and I was surveying the scenes of the wreckage on the internet. But then I got up and went to the piano, and I became very still and very meditative, and I began to play. After an hour had passed, I had a new body of work; I had improvised a series of new works for the piano, music inspired by the intensity of the storm, but also the sense of calm that had come over me.

There were pieces of metal siding being blown down the street outside, clanging around in the wind. And the trees were shaking violently. But in my warm studio, I was at peace and composing up a storm of my own.

I have been composing and improvising on the piano for more than twenty years, and I often get inspiration from that feeling that is a mixture of both energetic passion and meditative contemplation. 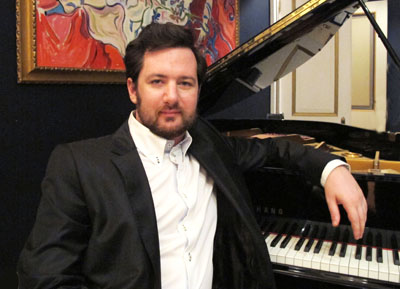 Here are two recordings from that night. Like most of my music, they are very avant-garde works, which are influenced both by the classical minimalist Morton Feldman and as well by the jazz pianist Keith Jarrett :

I learned Balinese music in Bali many years ago, studying with an elderly gamelan master. I still had the rubber-headed mallets from the gamelan instrument I learned there, and often use them to play the strings of the piano.

Here is the live recording of that piece:

Here is a video of me performing on the strings with some implements (from October 20):

The second recording of that night is a longer improvisation which is solely played on the keyboard, and both more contemplative and more intense. I am exploring some new ideas that have come into my music in the last few days, as well as feeling the energy of the weather outside.

Here is the live recording of that piece of music:

After I had recorded the new works, I uploaded them to SoundCloud, a new sound-based social networking website that is considered the Facebook of sound, and is very popular among new music artists for sharing music. Within a matter of minutes my new works that were inspired by Hurricane Sandy were up on the internet, and people were listening to them, while the hurricane was still going on.

That night, very late, I wandered into the streets to walk home. It was frightening to walk down the street, the trees were being blown around so violently. I was afraid of being hit by a branch as I nervously walked down the street, watching the pieces of metal siding being blown about. I made it home safe and sound, as my music was being heard around the world.

To Learn more about Joel Garten and to hear and watch him perform Live, visit his website, www.JoelGarten.com - Piano Improvisation at the nexus of Modern Classical Music and Avant Garde Jazz.

Joel Garten will be performing a concert of his piano improvisations on November 27, 2012 at 8pm in Toronto at the Musideum on the main floor of the 401 Richmond Buidling.