Five years ago, my wife and I began to enjoy the rewards of renovating three beachfront houses on Galveston's West Beach.

Shortly after we enrolled our beach houses in a rental program, we started receiving rent checks totaling almost $15,000 a month. Linda and I breathed a sigh of relief when we looked at the checks. Her dad made the purchase of these houses possible in his will and we knew he would have been pleased. Finally, Linda and I had found a way to generate a steady flow of unearned income. We could look forward to retirement without fear.

That moment of freedom was celebrated during the afternoon of September 8, 2008. At 10 p.m. that same night, I turned on the TV and saw Hurricane Ike in the Gulf of Mexico. It was the storm that changed our lives forever.

When the eye of the storm made landfall at Galveston during the early morning hours of September 13, 2008, it had already killed hundreds and caused billions of dollars in damages. Ike destroyed two of our three beach houses and severely damaged our third house which was located on the far west end of the Island. As the third most expensive hurricane in history blew and washed its way across Southeast Texas, it severely damaged our three remaining inland properties.

Linda took this picture while I was having my, "WHY LORD," moment. 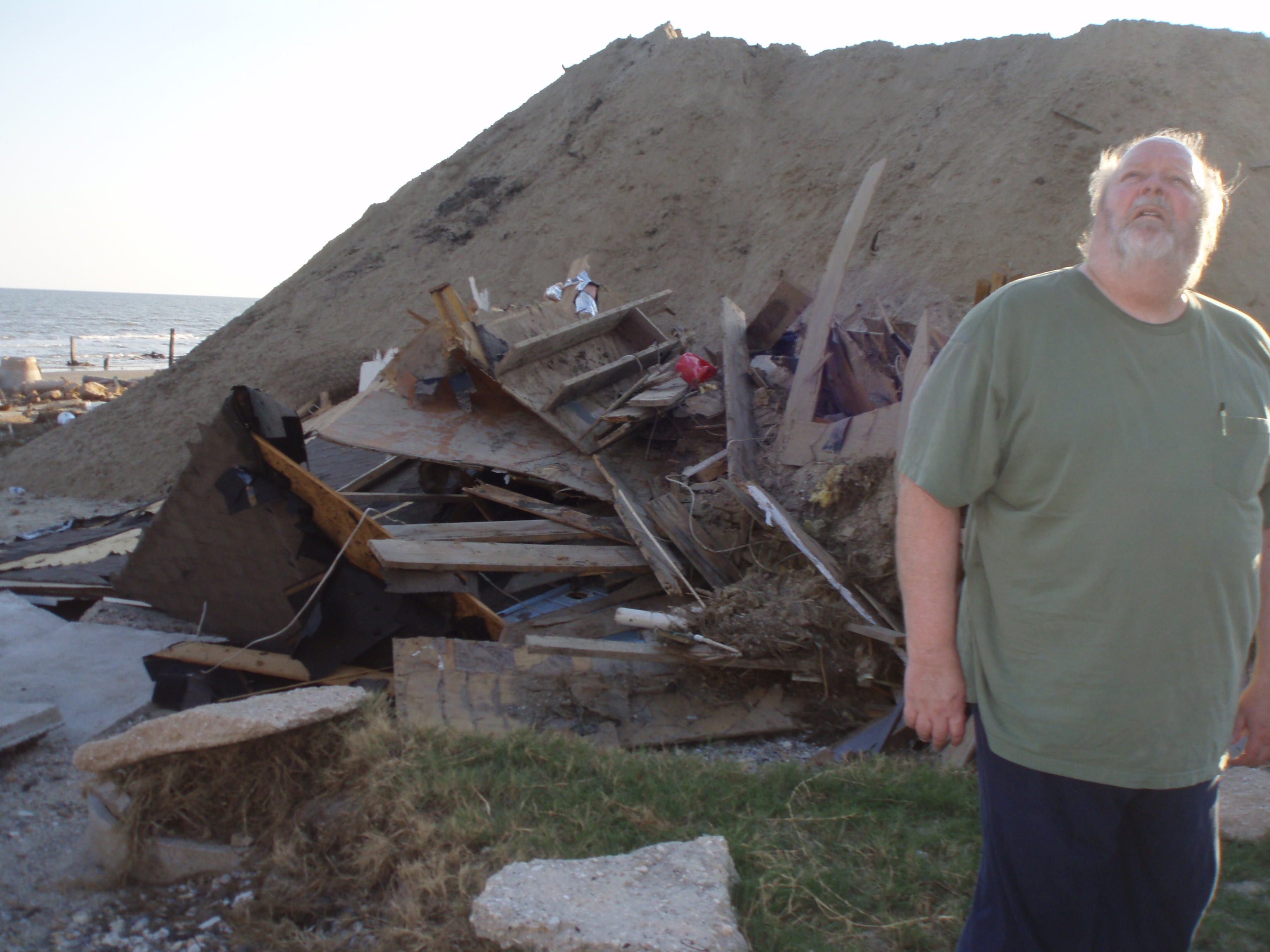 At the same time, America was suffering from a financial meltdown which caused our radio business to lose 80 percent of its revenue. Then a drought set in on our farm, and to add some bitter icing to the cake: our health broke. Things were imploding so fast that a biblical plague of locusts would have probably gone unnoticed. Oh, did I mention that the insurance companies ran for the hills after the storm?

Since then, Linda and I think of our lives in terms of before and after Hurricane Ike.

The houses we lost were more than just rental properties. They had become part of our family. Linda had chosen names for the houses that honored her father's memory. Each house carried the nickname that Linda had given her dad when she was a child. Linda called her father, "Dee," which was simply the second syllable in, "daddy." Thereafter, her father became known as Dee, a nickname that stayed with him for the remainder of his life.

Our houses were named Morning Dee Light, My Dee Light and Afternoon Dee Light. The names included a double entendre that caused complaints from leasing agents who demanded the renaming of the houses. We politely refused.

It was arguably one of the most beautiful houses on Bermuda Beach. The Houston TV crews repeatedly used it as a staging area and background for stories about the Island.

Here is the time-lapsed video that focused on our house during the day that Ike hit. Those filming had to leave the west beach before the storm surge which, according to everything we learned, reached the roof line of the house -- which no home could withstand.

The first six minutes of the video are fixed upon our house. If you look carefully, you will see the lower deck and main stairs fail. Toward the end, the siding begins to fail. In a way, we are almost glad their was no footage of it going into the ocean. This chunk of concrete with a broken piling sticking up was all that remained of, My Dee Light. 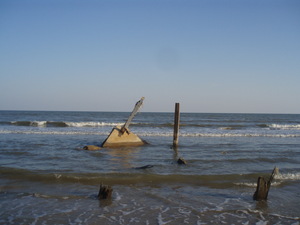 Interestingly, I was going to play macho man and "guard the houses" during Ike. However, I had recently undergone ear surgery and my doctor recommended I not stay there because I might get water in my ears. Today, the idea of staying seems insane. I would have ended up graveyard dead by midnight, just a few hours after film crews left Bermuda Beach.

As you may recall, the weather gurus were claiming low wind speeds of category two and three. The real hell came when the storm surge reached a category five.

Of our three beach houses, my personal favorite was, Afternoon Dee Light, which was also lost to the storm and can be seen in the second picture with our friend Brandell in the foreground. The house provided a wonderful ocean view because it had two large glass windows that faced the ocean. 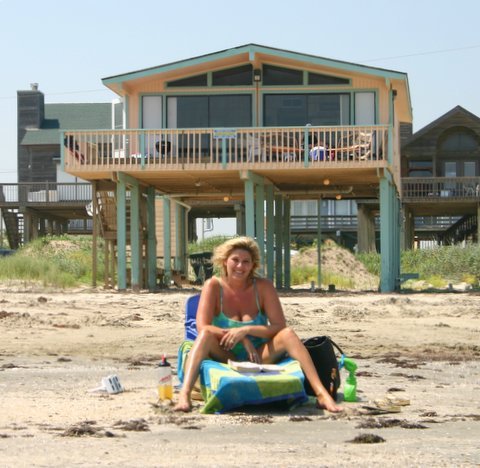 Afternoon Dee Light had survived hurricanes that destroyed all the other houses on the front row of Spanish Grant subdivision. The house was so near to the ocean that during high tide, we could sit on the deck and see nothing but water.

I enjoyed sitting at the dining room table each morning and drinking coffee while looking at he ocean. It was a wonderful way to start the day. I could have lived there for the rest of my life. 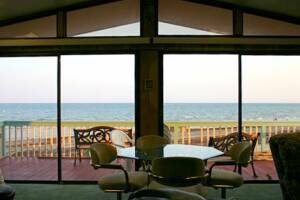 Our third house which we named Morning Dee Light, is located near the west end of the Island and it survived the worst of the storm, but just barely. 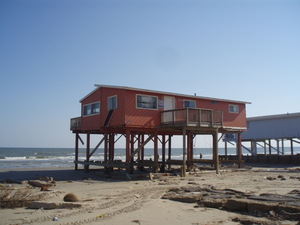 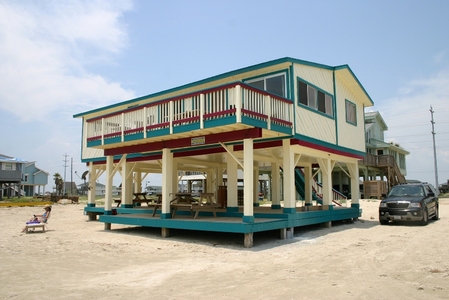 During one visit to Morning Dee Light, a sense of mental freedom came over me that I had never felt anywhere before, and I have never experienced again. It was magical. It happened on the ninth day of a 10-day visit.

The feeling only lasted for a day, but during that day, my mind became so free that I could have spent the rest of my life there, doing nothing but tinkering with our houses.

That fleeting moment of separation from a lifetime of workaholism was an experience that bordered on transcendent and spiritual.

Hurricane Ike taught me a life-saving lesson. Always beware of the ocean because it's a fair-weather friend that will turn on you and kill you! Hurricane Ike was a killer storm. It took hundreds of lives and many families will never find their missing loved ones. Our experience with Hurricane Ike was a sobering reminder about the power of these hurricanes. Hurricane Sandy should have driven the point home for millions more on the East Coast.

Attempting to ride out one of these killer storms in your residence is not just foolish, it's suicide and life insurance companies should treat it as suicide. Death certificates of those who were killed by the storm after refusing to evacuate should have, "suicide by storm," noted as the cause of death.

Despite the troubled years that began with Hurricane Ike, Linda and I have remained in love and naively optimistic. We are true survivors. The storm of bad luck that visited us has made us stronger and better people. At this same time, on this fifth anniversary of the storm, we mourn for those who did not survive.

Linda and I are two of the lucky ones. We got out of harms way. Had we been in either house during the storm, we would have certainly perished. Sure, we've probably lost over a million dollars but we didn't lose our lives. Instead, we count our lucky stars and we embrace our real blessings which are each other, our children, our grandchildren and our many friends.

To say the least, it has been a tough five years since Hurricane Ike, but like the song says, "it looks like we made it."