Oil is washing up on beaches across the Gulf Coast in the wake of Hurricane Isaac, and evidence suggests that at least some of the slicks, sheens and tar balls are likely relics from BP's Deepwater Horizon disaster.

As The Huffington Post reported last Tuesday, experts had speculated that the first hurricane to hit the Gulf of Mexico since the the April 2010 spill might stir up some of the estimated one million barrels of crude oil that remains. 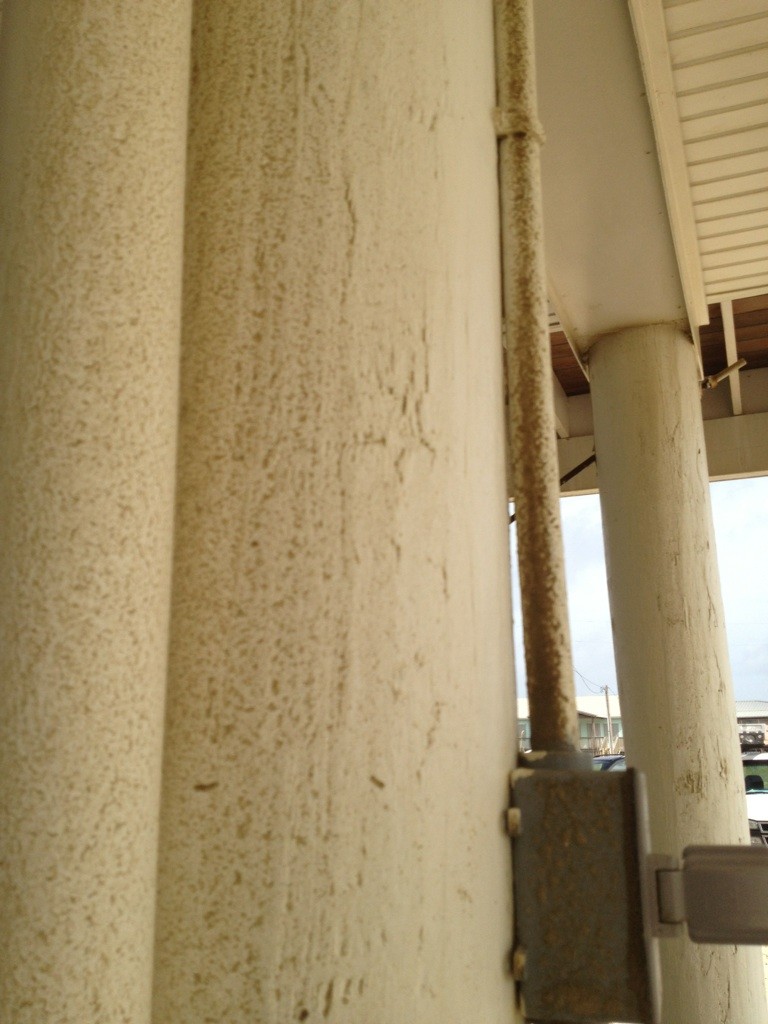 Splattered oil is visible on Scott Lewis’ beach home in Fort Morgan, Ala.

"I can tell you from firsthand knowledge that it happened, so the speculation is over," Scott Lewis, who owns a beach house in Fort Morgan, Ala., told The Huffington Post.

"There is oil residue everywhere along with tar balls everywhere," Lewis said, noting the oil had splattered on the outside of his home. "Unlike when the spill happened, and all they had to do was clean the beaches, this time the oil went airborne when the waves hit the beach, houses, dunes. It is a nightmare."

Meanwhile, in Lake Worth Beach, Fla., Telise Maquaire saw pieces of sea sponge soaking in oil. "It's the first time I've ever found oil affecting our beach," she said.

Similar scenes are being reported by crews who have taken to the skies and waters from Texas to Florida, evaluating the devastation left in Isaac's wake. On Tuesday, the discovery of large areas of oil forced the closure of a 12-mile stretch of Louisiana coastline to fishing and other activities.

Jonathan Henderson, of the nonprofit Gulf Restoration Network, spent Tuesday inspecting the East and West Ship Islands off the coast of Mississippi.

"What we saw yesterday was disgusting," he said, recalling heavy deposits of tar balls that appeared to have washed in from offshore as well as oil revealed below wind- and wave-battered sand. "We saw all the tell-tale signs of BP oil resurfacing." 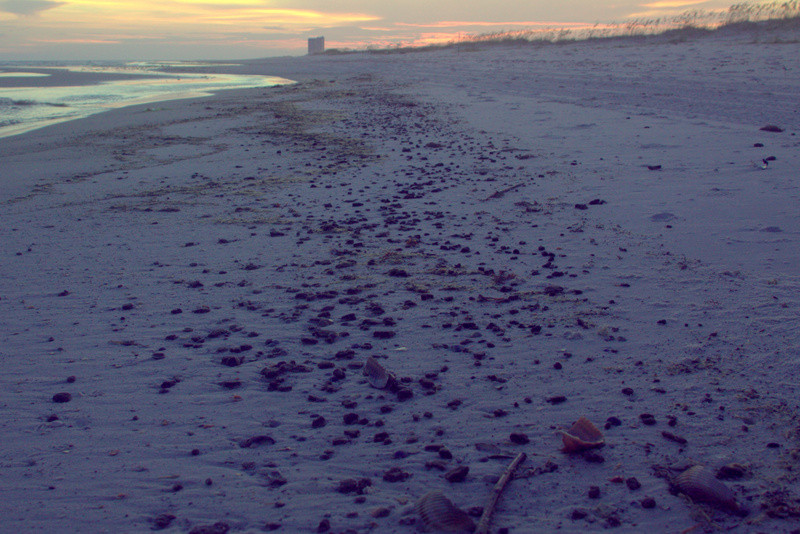 Tar balls fill the beach at Bon Secour National
Wildlife Refuge in Ala.

Henderson noted that samples collected for testing will eventually determine the toxicity and origin of the residues.

"There are numerous other companies doing business in the Gulf, and there are leaks every day of some shape or form," Henderson said. "But these are areas that we know BP oil has hit and oil remains, and the weathered tar balls are consistent with ones that have been coming up since April 2010."

Some oil that's been spotted in parts of the Gulf Coast have shown evidence of non-BP sources. Petty Officer William Colclough, a spokesman for the U.S. Coast Guard, noted that a leaking platform, oil drums and barges have been spotted in the vicinity of oil that Coast Guard teams had detected.

"The investigation continues," said Colclough. "And the clean-up response is ongoing."

BP also emphasized that it is too early to tell the origin of much of the surfacing oil. However, the company has now acknowledged the appearance of residual BP oil along shorelines near Fouchon Beach and Grand Isle, La.

“These are areas that were in active response prior to Isaac, so it was expected by the Gulf Coast Incident Management Team -- which includes the United States Coast Guard, state representatives, other federal representatives, and BP -- that these could be areas where highly weathered residual oil might be exposed.,” Ray Melick, a BP spokesperson, told HuffPost on Wednesday evening.

"In Florida, Alabama and Mississippi, shoreline quick assessments were initiated on Saturday, Sept. 1, and there has been no indication thus far of Deepwater Horizon residual oil in areas outside of existing cleanup operations," Melick said in a statement late Tuesday.

The shoreline in front of Scott Lewis' beach home is part of that cleanup territory. According to Lewis and Greg Miller, owner of Fort Morgan Realty, the quantity of oil has dramatically increased.

The two suggested that BP clean-up crews seemed to be speeding up their efforts. "They are trying to scurry and clean it up real quick," Lewis said.

Both also acknowledged that until test results come in, no definitive links can be made between the newly detected oil and the Deepwater Horizon spill. Still, they have their hunches. "The storm went right across where the disaster occurred," Miller said. "And it lingered where it had had the most impact. It was the perfect storm, per say."

Rip Kirby, a Ph.D. student at the University of South Florida, has been studying tar balls on Gulf beaches since the April 2010 disaster, including some that washed up after Tropical Storm Debby hit the Florida coast this June.

Crude oil contains some 1,000 chemicals, including cancer-causing benzene. Kirby has seen the levels of toxic chemicals in the BP oil samples decrease over time. However, widespread use of dispersant during the clean-up effort continues to help those chemicals persist.

The dispersants have also led to another unfortunate consequence: an increase in the oil's solubility. "If you sit on a tar ball with wet skin," Kirby said, "you will absorb that material through your skin."

At greatest risk of health effects from such exposures are people with compromised immune systems, pregnant women and young children.

Unless he has surveyed the sand the night before with a petrochemical-detecting UV light, Kirby won't let his 2- and 4-year-old grandsons play on the beach. "But not everyone has the $3,500 light to do that," he said.

Kirby criticized the ongoing Gulf Coast advertising campaigns that have suggested "the water is fine, come on down."

As with the aftermath of the original spill -- which HuffPost has reported may be the source of lingering coughs, headaches and other health effects among Gulf residents -- exposure this time around could occur not only by direct encounter, but also through contaminated air and seafood.

"Oil that may have been sunken is now brought closer to marshes and estuaries where so many creatures breed -- the nursery for organisms important in the food chain," said Marco Kaltofen, an engineer at Boston Chemical Data Corp., who received a shipment this afternoon of tar balls to test from Panama City Beach, Fla., the most southern point so far in the post-Isaac washup.

Of course, dredged crude oil is not the only petrochemical-related public health concern among those scouting Isaac's damage. Henderson's team identified coal from a transfer terminal contaminating neighboring canals, citrus groves and farmland.

"We saw cows standing in the middle of coal slurry," he said.

CORRECTION: A previous version of this story stated that one million gallons of crude oil are estimated to remain from the BP spill. The correct amount is one million barrels.