On the first day of Hurricane Season, June 1, a certain unease creeps into the city of New Orleans.

Residents begin checking the weather forecasts for low depression spots, the harbingers of monster storms. And they start thinking about levees partly because shortly after the devastating flood during Katrina, the New Orleans Times Picayune reported that annual levee inspections in Orleans Parish tended to be quick drive-by affairs ending with lunch for 40-60 people costing the state as much as $900.

While this is true, the same reports went on to suggest that the quickie inspections might have contributed to the catastrophic flooding and that the local Orleans Levee Board (OLB) may be partly responsible. Neither suggestion was ultimately proved true, but the myths persist.

Here is what really happened.

ER 1130-2-530, 30 Oct 96 establishes the policy for the operation and maintenance (O&M) of USACE flood control and related structures at civil works water resource projects and of USACE-built flood protection projects operated and maintained by non-Federal sponsors.

This program, called the Inspections of Completed Works by the federal sponsor (Corps) was designed to insure that the local sponsor (Orleans Levee Board) was complying with its federally mandated levee maintenance.

Before the 2005 flood, the OLB's maintenance activity included mainly cutting the grass on levee embankments and removing unwanted vegetation and debris. But, the OLB also performed other activities like checking concrete surfaces for open cracks, and inspecting for ruts, depressions and erosion on earthen levees.

To be clear, responsibility for the annual inspections belonged solely to the Army Corps. It would obviously be a conflict of interest for the OLB to inspect its own work. The Army Corps's inspections should perhaps be thought of as independent annual quality audits of the OLB's year-round maintenance activity.

Additionally, the Corps of Engineers' annual inspections were not designed to verify structural stability and performance and thus, could not have been expected to uncover potential problems with levees' and flood walls' ability to function. In other words, they were not a factor in the flooding as concluded by the preeminent report for information relating to the 2005 flood - the Decision-Making Chronology Report of 2008.

The drive-by levee inspections are therefore, a red herring in the story about the New Orleans flood.

To our knowledge, the Army Corps of Engineers has not directly supported the myth of the levee inspections. The myth apparently took wings on its own, months before the major levee investigations were completed; and in a post-flood environment of anger, grief and a rush to pass judgement.

After the levee failure investigations all concurred that design and construction flaws, not mother nature, was responsible for the flood, Congress responded by passing the first ever country-wide levee safety legislation which may affect the 55% of the nation's population protected by levees. The legislation ordered national policy changes in levee safety and levee building.

In the meantime, those annual lunches, which were intended as a social occasion for Army Corps personnel to meet staffers from the Orleans Levee Board, are a thing of the past.

Hopefully, myths and misinformation regarding the pre-Katrina levee inspections, and their role in the catastrophic flooding of August 2005, will also soon become a thing of the past.

This article was written with assistance from H.J. Bosworth, Jr., P.E., civil engineer and lead researcher for Levees.org.

PHOTO GALLERY
Wreckage in aftermath of the Great Flood of 2005 in New Orleans
Download
Calling all HuffPost superfans!
Sign up for membership to become a founding member and help shape HuffPost's next chapter
Join HuffPost 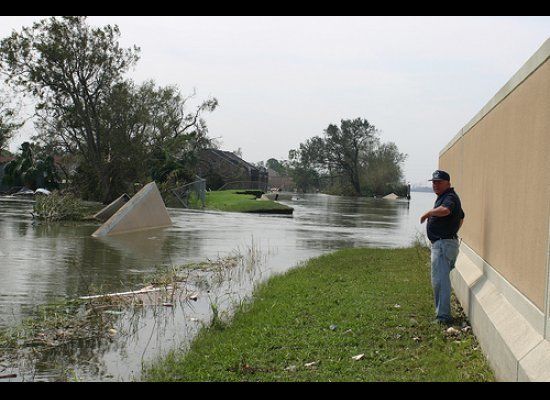