Ten years ago, Hurricane Katrina began its treacherous journey across the U.S. Gulf Coast, leaving its mark on the region and those who endured the brunt of its catastrophic force.

The storm will forever be remembered, in part, because of the journalists who captured its damage with their words, photos and videos.

Louisiana native Nicole Dahmen, an assistant professor at the University of Oregon School of Journalism and Communication, studies visual communication with an emphasis on photojournalism in the digital age. She spoke to The Huffington Post about how journalists covered the hurricane and shaped the narrative of the storm in the days following its impact.

"The images that were coming out, came out in phases," she said. "In the first phase, the images that we saw were of the wind blowing and water surging. After that, it was the flooding. Then we saw survivors and people on roofs waiting to be rescued, and then came the images of dead bodies and the immense destruction. Then the visuals began to turn political in nature. We saw examples of the Bush White House using the catastrophe as a 'photo-op,' which ultimately exploited the survivors."

Most major disasters have an image or two that come to embody that event, said Dahmen, pointing, for example, to the iconic 1972 Associated Press photo of the "Napalm Girl" that is widely linked to the Vietnam War. But Katrina is a different story, she said.

In 2005, Dahmen surveyed her students and some members of the general public to help understand how people were affected by images of the storm. She's currently in the process of conducting a similar follow-up survey.

What she has found from this research is that the public's memory of Katrina has not been shaped by one or two symbolic images as much as by their own experiences with the storm.

"When you talk to people about Katrina, they often give you their personal reflections," she said. "If you speak to someone from Houston, for example, they will likely tell you about an image of people coming into the city, escaping the storm. The images that people remember are from their own experiences of the story, rather than an overarching media narrative of Katrina."

She said that people she has surveyed have often said they consider images from television news to be the most "iconic" from Katrina’s coverage -- aerial footage of people being rescued from their roofs, or of the water rushing into the city as the levees breached.

We explored the media’s phases of coverage that Dahmen referred to and have compiled a list of the nation’s front pages from the days following Katrina’s devastating blow to the Southeast.

A Look Back At The Front Pages Of Katrina:

Look here to see how other newspapers covered the storm: 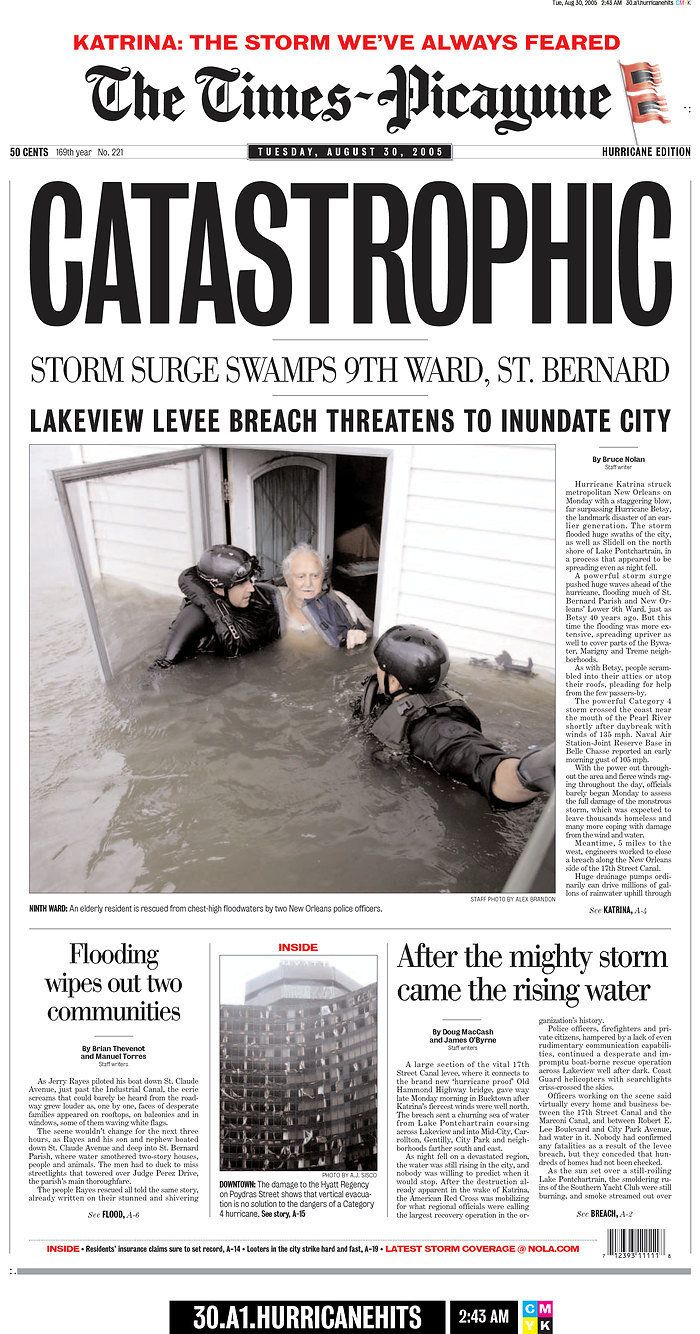