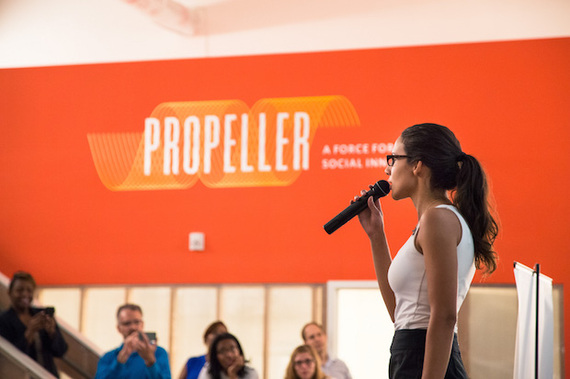 Andrea Chen is the co-founder and Executive Director of Propeller: A Force for Social Innovation and Linda Usdin is the board chair of Propeller, an incubator for social enterprises that is based in Broadmoor, which was flooded by up to ten feet of standing water during Hurricane Katrina. This article is based on research conducted for a series of articles released by The Data Center in conjunction with “The New Orleans Index at Ten,” a report tracking Greater New Orleans’ progress toward prosperity through economic growth, inclusion, quality of life, and sustainability.

As the adage goes, “Necessity is the mother of invention.” In 2005, on the heels of one of the costliest and deadliest disasters in American history, necessity created opportunity in New Orleans and ushered in a new wave of purpose-driven entrepreneurs who took a fresh approach to the city’s challenges: social innovation.

Pre-Katrina New Orleans was in the midst of a downward economic spiral, with social challenges that seemed intractable. In the month before Katrina struck, almost a quarter of New Orleans residents lived in poverty and nearly half were low income. In 2004, the Orleans Parish School District ranked 67 out of Louisiana’s 68 school districts, in the 47 ranked state nationally. Only a third of Orleans Parish students were at passable levels.

While those statistics, and many like them, created a mandate for social change, a traditional, restrictive business environment and other obstacles kept the city in a state of inertia. Would-be social entrepreneurs came up against challenges like the lack of viable economic opportunities, limited access to capital and government contracts, and an uncoordinated network of entrepreneurial support.

What resulted was a decades-long brain drain. Many native New Orleanians took their ideas elsewhere, leaving behind unsolved social challenges.

In the months immediately following the storm, the city suffered from a string of now-infamous breakdowns of the local, state, and federal government: no trash pick-up, no schools, no street signs, no public property maintenance, no health services – a list of failures, and loss that went on and on.

When faced with massive government ineptitude, communities responded with innovation and engagement. As recovery went on, native New Orleanians and newcomers alike seized opportunities to address longstanding needs. Rebuilding became more than the restoration of damaged buildings and roadways, it became a revisioning of systems that were broken long before the storm.

The positive momentum for social entrepreneurship in the ten years following Katrina has received international acclaim. Aspen Institute CEO Walter Isaacson wrote in The New York Times: “The memory of Katrina and the excitement of having to rebuild something better continues to keep people in New Orleans engaged and connected. There’s an edgy creativity that comes from the shared aftertaste of danger, a sense of community that comes from knowing you’re in the same boat. The city is still 'charged up with value,'… and remains a mecca for creative and purpose-driven young people from around the country seeking to avoid the malaise and everydayness of ordinary life.”

Civic engagement soared after the storm and is still strong, driven by a growing number of social change agents attracted by the energy of recovery and galvanized by need. A new civic leadership emerged from the ranks of residents who had never been engaged before, catalyzed by anger at unresponsive authorities and green dots on a planning map indicating that neighborhoods like Broadmoor should be repurposed as public parks.

The urgency of recovery also gave a strong impetus to grow the entrepreneurial ecosystem, a community of supporters to house and harness the building momentum for social change. Existing organizations received more funding and resources, and new organizations emerged to tackle gaps in the ecosystem like technical assistance, affordable office space, and access to capital. In 2009, we created Propeller to train social ventures, connect them to mentors and capital, and then to a community at our co-working space - but our work is only part of the broader movement that is changing things for good.

One look at the data on entrepreneurship shows just how significant the change has been. Post-Katrina, the rate of entrepreneurship spiked in the New Orleans metro area and — with a rate of business startups 64 percent higher than the national average — has outpaced the nation ever since. Residents of post-Katrina New Orleans are more likely to start a business than in other Southern metros like Nashville, Charlotte, and Austin, thriving cities with more than twice our population that have boasted 10 percent job growth since 2000.

Recovery funding and worldwide attention on New Orleans have translated to increased access to capital for new ideas, while a drive to build back better has inspired newfound openness and risk taking among funders.

This openness was mirrored in government and officials and policymakers, who became more willing to partner with community residents. In 2006, the state’s post-Katrina recovery efforts included the creation of the Louisiana Lieutenant Governor’s Office of Social Entrepreneurship, the first of its kind in the country to support social entrepreneurs at a statewide governmental level. After a groundswell of community activism pushed legislators to take action, new laws provided further support for social entrepreneurs (with L3Cs passing in 2010 and Benefit Corporations in 2012).

Hurricane Katrina and the levee failures wreaked havoc on one of America’s greatest cities, but the hard work of recovery has brought much-needed social progress.

During a recent visit to New Orleans, AOL co-founders Steve and Jean Case noticed the rise of social entrepreneurship. As Steve Case said, “I think New Orleans is poised to re-emerge as one of the great startup cities in the country, maybe even the world. Post-Katrina, New Orleans is uniquely positioned to attract venture capital and build businesses that can solve its most important problems by treating diversity as an asset. That’s also a quality Forbes recently called The One Thing Every Startup City Needs,” citing New Orleans as a national model for inclusive entrepreneurship with “a tendency to bring people together, despite one's profession or background.

We believe that social entrepreneurship will be a deciding factor in the third century of this great city. We can make New Orleans a model for building a more socioeconomically equitable and inclusive city, driven by social entrepreneurs who set out to solve its toughest problems.

When residents in New Orleans’ neighborhood of Broadmoor were faced with ten feet of standing water and a city commission that told them their neighborhood should not be rebuilt, they came back with the motto “Better Than Before,” a rallying cry echoed across the city as New Orleanians refuse to be satisfied with traditional notions of reconstruction.

Today, Broadmoor is emerging as a new hub of New Orleans’ entrepreneurial renaissance that is remaking New Orleans as a global hub for social innovation.

We rose up in spite of critics who called us the “American Atlantis” because we harnessed local assets and built a community of entrepreneurs dedicated to honestly facing and collectively solving our biggest issues—from water management to health, education, and food security.

Here is the formula that has made New Orleans a better, more resilient city through social enterprises: Identify market-based solutions to the community’s greatest challenges, build wide-reaching partnerships that can tap into local talent and resources that can solve them, and build for the long-term so that, in the difficult journey that leads to solutions, everyone has a role to play.

This formula is working in ways that the data can only begin to reveal. We invite you to come meet Propeller’s entrepreneurs, so that you can see for yourself how our toughest problems are being solved by some inspiring innovators. As we reflect back on Katrina this month, they are what give us hope for continued progress for the next ten years and beyond.

A national learning collaborative between cities of innovation with a focus on inclusive growth. #NewOrleans #Cleveland #Durham #Detroit