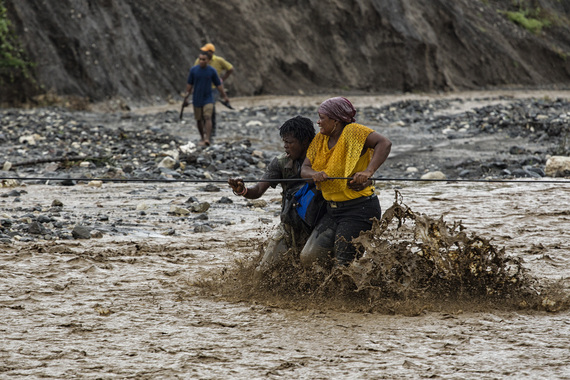 Scene from Port-au-Prince, Haiti, in the aftermath of Hurricane Matthew, which made landfall in the country on 4 October. Photo: MINUSTAH/Logan Abassi

Once again, Haiti is suffering. Once again, we are grieving for lives lost in avoidable tragedy.

This is not the first time that Haiti has experienced tragedy related to extreme weather. Nor will it be the last unless we acknowledge and urgently address the changes taking place in our climate. The fact that these shifts are having the greatest impact on those least responsible for greenhouse gas emissions must imbue us all with a special sense of urgency - and responsibility.

Hurricane Matthew rampaged across the Caribbean to the Atlantic coast over a 12-day period, particularly affecting Haiti, Cuba and the Bahamas before hitting the south-eastern United States. Information is still coming in from affected countries but hundreds are known to have died - the vast majority of them in Haiti. The cost of clean-up and recovery will run into the billions of dollars.

In Haiti alone, an estimated 1.4 million people are directly affected. The United Nations is appealing for US$120 million to deliver life-saving assistance and protection to 750,000 people over the next three months. This appeal needs urgent funding, but it will be only the first step on the long road to recovery for a country already struggling under the weight of past and present crises.

Further from the headlines and less dramatic on our television screens, 'slower' disasters like drought take a massive human toll and roll back years of development gains. Some may be surprised to learn that Hurricane Matthew is not the first extreme weather event to threaten Haitians this year. The island nation is one of dozens of countries around the world struggling with the effects of prolonged drought linked to the recent El Niño event that has seriously affected more than 60 million people. In Haiti the drought has more than halved agricultural production, forcing prices for locally-grown food up by around 40 per cent in one of the world's poorest countries.

While it is difficult for scientists to attribute particular events to climate change, both Hurricane Matthew and the El Niño drought layered on top of existing climate change-linked warming fit a distressing pattern: the changes to our climate are driving more extreme weather. In this 'new normal' recurring drought, floods, storms and other environmental threats can routinely overlap and compound each other's impacts - pushing communities into an inescapable cycle of shock and partial recovery.

Weather events don't have to be disasters

This 'new normal' demands a different way of doing things, both in our actions to reduce and adapt to the impacts of climate change, but also in the ways that we prepare for, and respond to, these climate-linked threats. All the evidence tells us that proactive and early action provides exponential returns in terms of human dignity, safety and well-being, as well as economic and social development.

Three landmark global agreements have been made in the last 18 months that focus, amongst other aspects, on ensuring that climate-vulnerable communities are protected from harm. The first, the Sendai Framework for Disaster Risk Reduction, is a global promise to reduce disaster-related deaths, increase the resilience of vulnerable communities and 'build back better' to reduce the impact of future disasters.

The Sustainable Development Goals, agreed to by every country in the world, have poverty eradication and climate change firmly in their sights, with a 2030 deadline for a range of climate-linked targets. Finally, the legally-binding Paris Climate Agreement commits 195 countries to keeping global temperature increases well below 2oC above pre-industrial levels and pursuing the goal of 1.5oC in order to protect the most vulnerable people and countries.

In our roles as the UN Secretary-General's Special Envoys on El Niño and Climate we are working to support the delivery of these agendas, with a particular focus on recurring weather events like El Niño and La Niña, predictable weather phenomena that bring with them increased risk of drought, floods and severe storms.

These types of weather events do not need to be disasters. When communities require international humanitarian assistance for predictable and recurring weather events like El Niño and seasonal hurricanes, it means resilience building and preparedness efforts have been inadequate. But we don't need to look too far to see that success is possible: investments in preparedness and resilience can pay enormous dividends.

In Hurricane Matthew's case, the storm passed over Cuba and the Bahamas at similar intensity to Haiti but, despite significant infrastructure damage, no deaths have been reported to date in either country. This is due in large part to careful planning and investments made at every level: from local community to national government.

The impact in Haiti itself could have been worse if not for the important preparedness work carried out by Haitian civil protection and municipal authorities. While there are many variables in any storm's impact we must look closely at these preparations and understand what can be built upon on and replicated to prevent future suffering.

Vulnerable countries and their international partners need to routinely plan and prepare for a range of climate-related risks. In doing so, they need to consider everything from the way that homes, schools and health facilities are built, to which crops are grown and how, to the way that families prepare themselves and their livelihoods for future disasters. The 'new normal' requires new ways of approaching development, and another level of planning, preparedness and political leadership.

We must also learn from the past. We know that, on average, more women and girls die in disasters than men. Forty-four per cent of Haitian families are headed by women, and women represent the majority of people living in acute poverty. The needs of the most vulnerable, including women and girls, must be identified and prioritised as part of disaster planning and response.

October 13 is the International Day for Disaster Reduction - a time to reflect on the ways in which we can reduce the impact of disasters on people on around the world. There is no one-size-fits-all approach but we know what works, and we committed as an international community to doing things differently in 2015. What is needed now is the political will to act, and a clear and simple plan for implementing these commitments. Together we are developing a 'Blueprint for Action' that we hope will help to catalyse and guide the necessary investments to prevent recurring weather events from becoming disasters.

Hurricane Matthew serves as a painful reminder that we have no time to waste. Let us get to work now, to address the immediate suffering caused by Hurricane Matthew and El Niño; to adapt to the new climate reality; and to ensure that no-one is left behind.

In May 2016, UN Secretary-General Ban Ki-moon appointed Mary Robinson and Ambassador Macharia Kamau as his Special Envoys on El Niño and Climate, tasking them with calling attention to the people around the world affected by severe El Niño-linked drought and climate impacts, and mobilising an integrated response that takes preparedness for future climatic events into account. Mrs. Robinson is currently President of the Mary Robinson Foundation - Climate Justice. She was the President of Ireland and her previous UN roles include serving as the UN High Commissioner for Human Rights. Ambassador Kamau is the Permanent Representative of Kenya to the United Nations, and has had a long career in the service of the world body, including with the UN Children's Fund and the UN Development Programme.