The government said it would use military and commercial planes to airlift stranded tourists after the peninsula's two major airports were closed on Sunday due to one of the worst storms to hit the luxury retreats of Los Cabos on Mexico's northwestern coast.

The U.S. National Hurricane Center (NHC) said Odile weakened to tropical storm status on Monday night after it became a category four hurricane over the weekend.

Odile was expected to weaken further to a tropical depression by early Wednesday, but the NHC said it would likely cause life-threatening flooding and mudslides in the next day or two.

About 240,000 customers of national electricity utility CFE, or 92 percent of those living on the southern half of the peninsula, lost power on Monday, the company said in a statement.

The storm, with sustained winds of 70 miles per hour (113 km per hour), shut down San Jose del Cabo's international airport as well as the La Paz airport about 100 miles (161 km) to the north. It was unclear when flights might restart.

"We're going to need about two weeks to clean this up, these are some serious losses," said Gerardo Rodas, 50, owner of a small hotel in the town of Loreto on the eastern flank of the peninsula by the shores of the Gulf of California.

Around 135 people required hospital treatment due to Odile, most for minor injuries, said Luis Felipe Puente, head of national emergency services. No deaths were reported.

Tourists in shelters or hiding in bathtubs in their rooms posted photos overnight on social media showing windows barricaded with furniture after they were blown out.

"It was awful," said shop worker Osuna. "Nobody slept last night because water was coming in and we had to get it out."

At least 26,000 foreign tourists and 4,000 Mexican tourists were estimated to be in the region, officials said, all of whom will be eligible for the government-sponsored airlifts.

Thousands of others were evacuated from areas at risk of flooding as the NHC said rainfall in some areas could reach as much as 18 inches through Friday.

Some experts said it was the strongest hurricane to hit the tip of the peninsula since the advent of satellite data.

Many beaches in Mexico were packed with tourists during the weekend ahead of Tuesday's Independence Day holiday, but the resorts of Los Cabos are in low season and mostly visited by Americans. 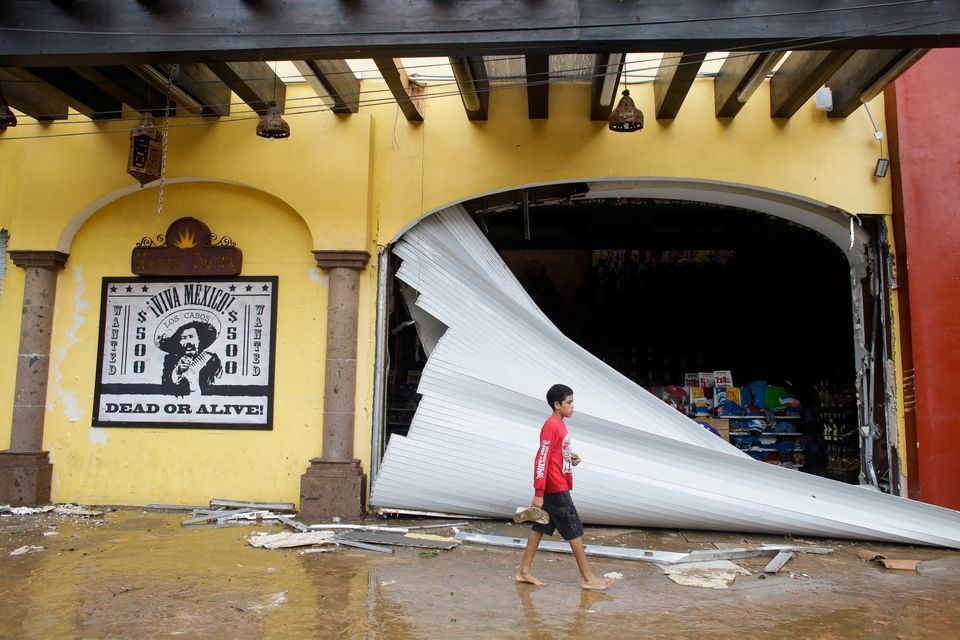