I sit here in my Brooklyn apartment in the aftermath of Hurricane Sandy. Reports are flowing in of friends and colleagues who have had homes destroyed. The lack of access to subways and ongoing power outages have made it confusing and difficult to go anywhere. Billions of dollars in property have been lost, the city's infrastructure has been crippled, and the Internet is patchy at best. And New Yorkers are coming together in a spirit of optimism, hope and community just as they did after 9/11 and the blackouts.

Whenever there is a catastrophe, it seems that many of us -- for just a little while -- are the best versions of ourselves.

In NYC right now, people who don't normally talk to one another are working together to problem-solve and make sure people in need have a warm place to sleep, medical care and access to critical resources. Pedestrians are smiling and saying hello in the streets, rather than hurrying forward in a rush to get to where they need to go. Scores of restaurants and volunteers have stepped up to find creative ways to ensure everyone has food and dry shelter. Even people in coffee shops who are usually glued to their laptops are taking time out to talk to one another.

The question is, once the buzz of the hurricane dies down and life goes back to normal, do we have to go back to business as usual? Wouldn't it be nice living in a society where connecting to and helping one another was the norm, not just something special that happens to us when disasters hit?

Yes, this could just be wishful thinking. But then again, maybe not.

Last month our group A Big Project conducted a survey on what it would take to get to a better world. People from 97 countries gave us their ideas, and then voted on the best answers. Among the most popular answers:

• Be more kind and understanding to people who are really far from me by their ideals, goals, character, etc. (from Yerevan, Armenia)

• Stop reacting to what happened -- instead, take a step back, look at things differently and reconsider my first impression according to others' point of view and seeking the common good. (from Liège, Belgium)

• Work on my own compassion for the world, my own awareness. Shift how I do things and how I interact with others on a daily basis. And live with gratitude in my heart every day.
(from Toronto, Canada)

• Try to listen inward to understand what I truly need and want, and not to what society says I need and want. (from Lund, Sweden)

These ideas might sound a bit lofty and unrealistic. It is much easier to judge the actions of others, than to look inside of ourselves. People are not just going to actively work towards changing their own patterns without a lot of support and tangible promise of payoff -- especially in NYC.

But the call to engage in this self-reflection and individual action is growing all over the world.

The Vatican just issued a new statement calling on Laypeople to "Help Change the World." It places new emphasis on the individual, rather than simply the Church, to serve as Jesus' change-agent. President Obama recently surprised the U.S. public suggesting that he now knows he can't change the politics of Washington D.C., and is calling on individuals to help create the change needed to form a more just and productive society. Push4Peace is a large-scale global initiative working to secure one billion commitments to individual change from people around the planet to create a more peaceful home.

And right now, artists and musicians in 97 countries are mobilizing to create a Global Arts Renaissance to inspire each of us to do the work to help life change for the better. They will do so using song, dance, paintings, murals, sculptures, plays, popsicle sticks, crop circles, synchronized swimming and many other types of media. The project is seeking to inspire millions around the world to simultaneously engage in a moment of self-reflection and change by focusing on what could be possible if each of us took responsibility to become the people that we want to be (as opposed to the people that we just got used to being).

Do the messages now coming from the Vatican, President Obama, global initiatives and artists represent the early stages of a movement to break our old ways of doing things? Are we finally realizing that the key to creating the world we want is not to make others see things the way we do... but rather to change the way we ourselves view and participate in the world?

The devastation from Hurricane Sandy is still being felt, and it will take a long time before things return to normalcy. But maybe, just maybe, the humanity pouring out from the storm can support the call for a new normal and help us move closer a world we all feel better about living in.

What would it take to actually create and maintain that new normal? Well, that's a question you would have to ask yourself. 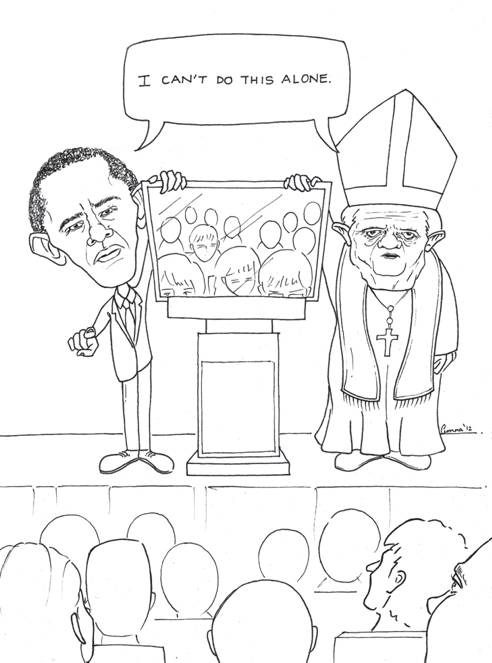