NEW YORK -- Making their way to makeshift voting tents heated by generators or scrambling to find suddenly relocated polling sites from their powerless houses and isolated neighborhoods, millions of voters in New York and New Jersey voted Tuesday, even as many continued to reel from the damage of Hurricane Sandy. Across the region, scenes of empty voting sites or overcrowded lines were both common, and Election Day seemed to many voters more hectic and confusing than in years past.

Lines stretched for up to one and a half hours at polling stations in some Manhattan neighborhoods, where voters still struggling to regain heat and hot water in their homes withstood 40-degree temperatures and blasts of chilly air. In Staten Island and the Rockaways, two of the areas most ravaged by the storm, makeshift voting tents were set up for the few voters left to use them. In Hoboken, N.J., a city still pumping out from several feet of flooding, the few voters at several polling stations faced short lines, or no lines at all.

"Four years ago, I had to wait behind 60 people to vote," said Steven Luzzi, a 38-year-old mortgage banker who drove 30 minutes from New Providence, where he had fled to avoid the storm. "Today, I just walked right in," said Luzzi, who voted at Adams Garden Community Room in the city's 3rd Ward.

Similar scenes played out in Staten Island, N.Y., where empty booths greeted voters who trudged through trash-filled yards to a polling site that had managed to open by early morning at P.S. 52. When Marylou Barcia, a poll worker, arrived at the school at 5 a.m., she found the polling station had been relocated to an outdoor tent. She spent an hour with volunteers to get the space ready, with a generator to provide heat and lights. "It's not right," said Barcia, whose own home had also been flooded.

"It's a presidential election, and as you can see, there's not a huge turnout. This is a very densely populated area and there should be a bigger turnout. I think people have other things on their minds," said another worker at the polling site.

At a similar generator-powered polling place at Scholars' Academy public school in New York's Rockaway Park neighborhood, many who turned out to vote wore face masks to shield themselves from the grimy air. It wasn't easy for Rockaway residents to make it out to vote, a fact reflected in the short lines. The Rockaways are still mostly without power, heat and hot water. On Tuesday, residential streets surrounding the polling station were piled with so much refuse that cars and pedestrians had a hard time navigating them.

Rita Robles lives on the ninth floor of a city-subsidized housing cooperative in Dayton Beach Park. To get to the polls, she had to climb down a pitch-black stairwell with the help of a flashlight. Many of her elderly neighbors couldn't make the trip safely, she said.

"Is it possible to vote at home today?" Robles asked one of the polling officials before getting in line.

"Where did you hear about home voting?" the woman replied. "Be careful, it might be a scam. All voting happens at polls."

Robles said later that she wasn't falling for a trick but trying to stick up for her neighbors. "It's really unsafe in our building," she said. "It's getting so cold, we can't sleep at night. People throw away garbage in the hallway. We're scared someone will rob us, so we don't want to leave our apartments."

"The older people are so afraid, they won't open their doors when you knock," said Robles.

Those at the polls whose cars were spared by the flood also had to worry about conserving gas. "That's been a nightmare," said Steven Lynn, a New York City bus driver who lives about a mile away from the polls. Still, Lynn said no hardship should count as an excuse not to vote. "Too many people struggle for this right," he said. "You gotta do it."

New York and New Jersey election officials said they are still assessing the effect of Hurricane Sandy's aftermath on voter turnout, but for the voters who did make it to the polling sites, many said they left with an outsized sense of accomplishment in the face of hardship. According to Ernie Landante, a spokesman for the New Jersey Division of Elections, fewer than 100 polling places were without electricity, compared to about 800 a day prior.

In lower Manhattan, an area still reacquainting itself to life with electric power, Chris Kohn, 51, had been standing in line for 55 minutes when he got close enough to feel a bit of heat seep out the door of the McBurney YMCA on 8th Avenue near 14th Street. Kohn, who had lost power for six days but regained electricity on Sunday morning, considered himself lucky to have to walk only a few blocks to his polling site. And although it was cold, Kohn was willing to wait. "Outside of jury duty, this is your only shot to participate in democracy," Kohn said. "If you don't take it, that's your choice, but I'd say that's ill advised."

After New York Gov. Andrew Cuomo issued an executive order on Monday to let residents vote via provisional ballots at any polling site in the state, some residents were making use of the flexibility -- when they could find a way to get to the polls. The same option was also extended to displaced voters in New Jersey, which also offered voters the chance to vote by email. But the email process, which was regarded with suspicion by watchdog groups, experienced blips, as elections officials received more applications for email voting than they could process. The state announced the email ballot deadline would be extended until 8 p.m. Both the New York and New Jersey efforts were for provisional ballots, which are counted by officials after a voter's eligibility is confirmed.

But even with many options for voting, some people who said they typically would vote felt they simply had no time in the midst of recovering from the storm.

"To be honest, it doesn't feel like Election Day. I don't know if I'm going to vote. It's the last thing on my mind right now," said Anna Sandler, 40, who had just returned to her house in Maplewood, N.J., for the first time since evacuating to stay with family near Philadelphia.

"I was really eager to vote. I vote in every election, and I wanted to take my kids to see the polls," said Sandler, who said she had no time to do it between taking care of her home, which was not flooded but had lost electricity, and packing clothes for a stay in temporary housing at a hotel or with a friend.

Sandler's polling station was one of several that were moved by New Jersey election officials because of the storm. "I got an email telling me it was moved, but I wonder about those people without power and access to find out what's going on," she said.

In Red Hook, much of which sits in a low-lying area of Brooklyn where Mayor Michael Bloomberg ordered evacuations just before Hurricane Sandy came ashore, most of the neighborhood remains dark.

Eileen Shannon, 57, a nursery school director, and her daughter Fiona Adams, 21, found out where to vote when the power came on at their house Monday. That allowed Shannon to charge up her phone and receive an alert from New York City’s Board of Elections about the super polling site at P.S. 27, which was serving voters from 10 different precincts.

"It worked," Shannon said. "It really did. Of course, we would have found a way to vote if it hadn't. This election is very, very important. This country can go in two very different directions today."

Back at Staten Island's P.S. 52, Linda Steiger, 60, said she made it out to the polls after spending the day salvaging the remnants of her belongings from her nearly destroyed home.

"I lost everything," she said outside of the station's generator-powered tent. "All I have been doing is salvaging for days and just waiting for flood insurance to kick in."

Despite her troubles, she said, "it's important for me to vote." 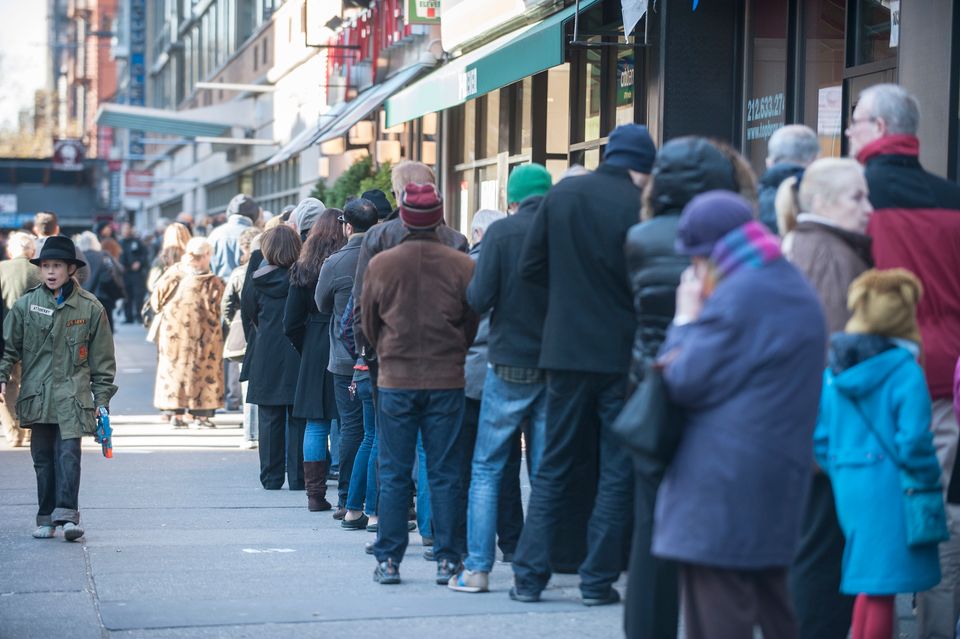