Over the years I've written several blogs about the connection between extreme weather and climate change, so watching Sandy pummel the East Coast compelled me to revisit this issue once again.

Watching the images of Sandy leaving a path of destruction brings back memories of the day after Hurricane Andrew hit my home in Miami back in 1992. The state of shock as my parents and I approached our storm ravaged home is still fresh in my memory even 20 years later as I see the faces of those who are experiencing the same today. 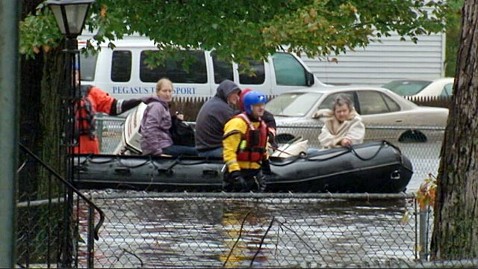 My heart goes out to them.

As a mother of two, I can't help but think of the kids who just Sunday were obsessing over what candy they might collect on Halloween and whether or not their costume was just right, makes it even harder to watch.

Yes, things will eventually return to normal for most but having lived it - I know it's not a fast or easy road back to normalcy.

Sandy truly lived up to its hype as a superstorm. Wind, water, flooding, even snow, has left one of our most densely populated areas paralyzed for days. A record storm by any measure, Hurricane Sandy has left its mark.

This massive storm, roughly twice the size of Texas, made landfall in New Jersey on Monday evening with 80 mph sustained winds killing at least 39 people in nine states and leaving more than 8.2 million homes and businesses on the eastern seaboard without power. 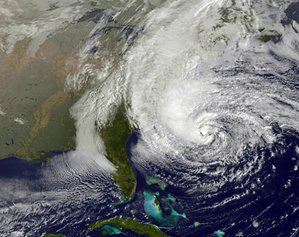 Sandy's strength, as indicated by barometric pressure just before landfall, set a record by having the lowest barometric reading ever recorded for an Atlantic storm to make landfall north of Cape Hatteras, North Carolina. The lower the pressure the stronger the storm.

Adding insult to injury, as Sandy approached the Northeast, it converged with a cold-weather system that resulted in a hybrid of rain, high winds and snow.

The images are shocking. Almost as shocking as finding this headline on Fox News. Yes, Fox News: "Scientists: Global warming didn't brew superstorm, but it might have heated up key ingredients."

Admittedly, this is an AP wire story but I did find it on Fox.

The article begins with a quote that today, in Sandy's wake, is being uttered by more than one scientist and official: what used to be once-in-a-century storm is now happening at least once per year. The piece goes on to explain what we who work to combat global warming have been saying for years:

Simply put, Sandy and its wrath were influenced by climate change.

We've said it before: global warming has made our oceans warmer (the Atlantic Ocean is about 2-5 degrees warmer on average than a century ago). Warm water fuels hurricanes with extra energy, making them more violent, increasing the amount of rain they carry and making flooding more likely.

This was echoed by Kevin E. Trenberth, senior scientist at the National Center for Atmospheric Research in Boulder, Colo., who explained, "All weather events are affected by climate change because the environment in which they occur is warmer and moister than it used to be."

Higher sea levels have also increased the risk of flooding. As my colleague Dan Lashof pointed out, water levels around New York are nearly a foot higher than they were 100 years ago. In fact, sea levels stretching from Boston to Norfolk, Virginia are rising four times as fast as the global average, making the region vulnerable to flooding and dangerous storm surges. As we saw with Sandy, flooding from storm surge has caused serious problems, destroying part of the iconic Atlantic City boardwalk, flooding Lower Manhattan and the subway system for the first time in its history, to name a few.

It seems today from the coverage of Sandy, that we can all agree that these factors are indeed facts -- not talking points -- and these facts point to a new reality. New York Governor Andrew Cuomo put it well, "Anyone who says that there's not a dramatic change in weather patterns I think is denying reality," Cuomo said. 'We have a 100-year flood every two years now.'"

As someone who has lived through a so-called 100-year storm, I have to again say -- we have to do something about this and do it now.

Sure people are resilient, people will rebuild, but why should we put life and limb at risk simply because we refuse to take action to limit the carbon pollution that is the main reason our climate is changing?

We can cut carbon pollution by using energy more efficiently, cleaning up our power plants and increasing our use of renewable energy.

Our children should not have to pay the price of our politicians refusing to buck the power of big oil and big coal simply because they fund their campaigns!

The deniers will keep denying -- even with the evidence in hand -- after all their position is based in politics which as we've seen this year, often have loose footing in fact. For the rest of us who want to evolve beyond fossil fuels, dirty air and fear of the next superstorm, drought, or freakish unprecedented extreme weather event, we don't need more proof, we need action.