Last month, Mike Tidwell, director of Maryland's Chesapeake Climate Action Network and the author of the 2006 book The Ravaging Tide -- which detailed the expected rise in extreme weather events that will come with global warming -- received a pamphlet in the mail from his insurance company, Travelers. The full-color flier depicted a typical suburban home with a lashing storm looming on the horizon.

Federal disaster declarations are up, the pamphlet declared. Average winter storm losses have doubled since the 1980s. Thunderstorms last year caused over $25 billion in damages, more than double the previous record.

"That flier was astonishing," said Tidwell. "I couldn't remember ever getting anything like that before."

The implication was simple: Given the bounty of scientific and statistical evidence now in hand, insurance companies can't afford to dither over whether climate change is real -- and really, neither can anyone else. Today, another multibillion-dollar weather disaster -- the very sort that scientists have been predicting for years would increase in frequency and intensity as the planet heats up -- is now bearing down on the American East Coast. Roads and subways and homes will flood and lives might well be lost (the death toll in the Caribbean already is as high as 65). Property damages from wind and storm surges could break records. And as many as 10 million people will likely lose power once Hurricane Sandy comes ashore somewhere along the New Jersey coast later tonight.

With one week left before an historic election that, as it happens, has been roundly criticized for its utter lack of high-level discussion of climate change, the smooth functioning of democracy itself might well be undermined by the storm, with the potential for widespread power outages in some areas lasting 10 days or more -- well beyond next Tuesday's scheduled polls. 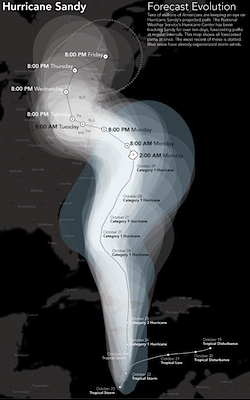 Residents along the East Coast are bracing for a storm that has prompted evacuations and shut down transit systems, schools and businesses. The map above shows the evolution of Hurricane Sandy's past and predicted path. Click the map for more.

If ever there was a time for everyone to wake up, Tidwell suggested, it's now.

"The irony is that the two presidential candidates decided not to speak about climate change, and now they are seeing the climate speak to them," said Tidwell. "That's really what's happening here. The climate is now speaking to them -- and to everyone else."

To be sure, a small but shrinking cadre of skeptics still question the basic mechanics of global warming -- including the likelihood that a hotter planet will produce more powerful and deadly storms like Sandy -- but the evidence is, once again, staring the nation in the face.

More than anything else, after all, hurricanes need warm ocean water, usually above 79 degrees Fahrenheit, to thrive. High humidity also adds fuel. Over the last several decades, both ocean temperatures and water vapor have increased in large part due to the burning of fossil fuels, which increases the amount of carbon dioxide and other so-called greenhouse gases in the atmosphere. Such gases act like a blanket around the planet, keeping the sun's heat from bouncing back out into space. That's an important phenomenon for sustaining life, of course, but too much of the blanket effect can make life as we've known it far more difficult.

Many scientists believe the atmospheric concentration of those gases must be kept below 350 parts per million to avoid dramatic and runaway changes in our climate. That benchmark has already been passed.

According to the latest measurements from the National Oceanic and Atmospheric administration, the average global temperature across land and ocean surfaces during September 2012 was 1.21 degrees above the 20th century average. That temperature ties with 2005 as the warmest September in the 133 years that records have been kept.

While scientists admit that unequivocally tying any one particular storm to climate change -- an area of research known as "event attribution science" -- is still very difficult, such hair-splitting is, in practical terms, nearly meaningless.

"We can't blame the existence of a single hurricane on global warming, just like a die weighted to roll sixes can't be blamed for any single roll of a six," said Michael Mann, a physicist and the director of the Earth System Science Center at Pennsylvania State University. Sixes, after all, will sometimes happen anyway, even when the dice aren't loaded, Mann explained.

"But we can see that climate change is playing a role in setting the context for these storms," Mann continued, "in particular the record levels of North Atlantic ocean warmth that is available to feed these storms with energy and moisture."

Kevin Trenberth, head of the Climate Analysis Section at the USA National Center for Atmospheric Research and one of the world's foremost experts on changes to global energy and water cycles, suggested in an email message that Hurricane Sandy represents the "new normal."

"Climate change is changing the weather," Trenberth said. "The past few years have been marked by unusually severe extreme weather characteristic of climate change. The oceans are warmer and the atmosphere above the oceans is warmer and wetter. This new normal changes the environment for all storms and makes them more intense and with much more precipitation."

Rising temperatures are also likely to intensify other storm phenomena. Thunderstorms may become less frequent but more intense, for example. And all that extra moisture also increases the threat of inland flooding, as happened after Hurricane Irene passed over the East Coast last year, contributing to the lion's share of roughly $16 billion in total damages. Add to this that the fact that ocean surges associated with such storms now ride on sea levels that have risen over the last century, and the potential for catastrophic losses is plain.

Which, of course, is why companies like Travelers are reaching out to customers like Tidwell to gently say, 'This stuff is real.' Indeed, the Travelers pamphlet is based on data compiled by the German reinsurance giant Munich Re, one of the largest reinsurance companies in the world. Just last week -- and only days before the first stirrings of Hurricane Sandy were detected in the South Atlantic -- the company produced a nearly 300-page report called "Severe Weather in North America."

According to the report, between 1980 and 2011, the overall losses from weather catastrophes was over $1 trillion in 2011 dollars -- including some $500 billion in insured losses. Hurricane Katrina itself accounted for some $125 billion in losses, according to the Munich Re analysis, and roughly 30,000 people "lost their lives due to weather catastrophes in North America" in the 30 years examined by the report.

"Nowhere in the world is the rising number of natural catastrophes more evident than in North America," the analysis declared. "The study shows a nearly quintupled number of weather-related loss events in North America for the past three decades, compared with an increase factor of 4 in Asia, 2.5 in Africa, 2 in Europe and 1.5 in South America."

In a statement accompanying the report's release, the Head of Munich Re’s Geo Risks Research unit, Peter Höppe, said, "In all likelihood, we have to regard this finding as an initial climate-change footprint in our U.S. loss data from the last four decades. Previously, there had not been such a strong chain of evidence.

"All stakeholders should collaborate and close ranks to support improved adaptation," Höppe added. "In addition, climate change mitigation measures should be supported to limit global warming in the long term to a still manageable level. As North America is particularly exposed to all kinds of weather risks, it especially would benefit from this."

Recent surveys suggest that most Americans now understand the connection between climate change and more severe weather, including a report released just last month by researchers at Yale and George Mason Universities. Among other things, that survey found that 74 percent of Americans agree that "global warming is affecting weather in the United States." That was up 5 points over the last time the question was asked in March.

Whether that popular concern, the risk modeling of insurance giants like Munich Re, or even the ravages of Sandy will nudge frank discussions of climate change to the front and center of the presidential campaign in its waning days, however, is unclear. On Friday, President Obama, in an appearance on the MTV network, fielded a question on the issue from a resident of New Jersey, a state that is staring right down the barrel of Hurricane Sandy.

"We're not moving as fast as we need to," the president said. "And this is an issue that future generations, MTV viewers, are going to have to be dealing with even more than the older generation. So this is a critical issue."

Obama highlighted many of the policies that his administration has pursued over the last four years to begin curbing greenhouse gas emissions, including tough new emissions standards for cars and trucks, and a doubling of wind and solar energy production. But he also said that the problem is compounded by forces beyond the nation's direct control, including increasing emissions in countries like China and India, who "feel that they have to prioritize getting people out of poverty ahead of climate change," the president said.

For his part, Mitt Romney has said little on the topic of global warming, admitting by turns that he believes it is happening but adding that he remains unconvinced about humanity's role in it -- evidenced, perhaps, by his fossil fuel-heavy energy plan for the next four years.

The Romney campaign did not respond to numerous requests for comment on the approach of Sandy and the implications of global warming.

Meanwhile, for Tidwell -- who, when reached by cell phone Monday morning, was busy buying groceries amid the throngs of other Washington, D.C., area residents who were preparing for Sandy -- said continued equivocation on the issue was absurd.