CONEY ISLAND, N.Y. -- The night the sea swept over Surf Avenue, Dick Zigun, the modern day P.T. Barnum who helped breathe life back into this strange and iconic corner of New York, was at home on West 15th Street, three blocks from the historical freak show that he resurrected and two blocks from the beach. Like many of his neighbors, Zigun had decided not to obey the city's orders to evacuate.

But he and his cohorts had taken some precautions, boarding up the windows of the old theater and lining the walls of the theater and his home with sandbags. When the water started seeping under his door, Zigun looked outside and saw that the street was already flooded. He waded across the street to where Stephanie, the snake charmer at the freak show, was drinking herself into oblivion, while her 10-foot and 8-foot Burmese Pythons were locked in their cages on the ground floor of the theater a few blocks away. As the pair sat inside the third-floor apartment, the rising water started slowly short-circuiting the doorbells.

"It was the creepiest thing," Zigun said, "first someone's ringing on the first floor apartment, then the second floor and finally the third floor. You have this weird image where if you held your breath and went downstairs, the drowned captain of the Titanic would be there with a mermaid, waiting to pull you into the tide."

Zigun is the head of Coney Island USA, the beloved New York institution behind the Mermaid Parade, the Coney Island Circus Sideshow and the Coney Island Museum. When he came to Coney Island in the 1980s with a couple of theater degrees and the "crazy notion" that Coney Island could be the staging ground for his unusual ideas of what constituted valuable art (burlesque shows, fire-eaters, Penguin Boy), the neighborhood was reeling from decades of economic decline. Over the following years, Zigun and his friends and co-conspirators managed to salvage what remained of the amusement district's glittery heyday in the early part of the 20th century, attracting a new generation of visitors to the boardwalk.

Recent years brought new rides and shops to the area, and just a few days before the storm, Coney Island USA put on its first Halloween parade. Scores of children and parents came to watch the step crew and to listen to the New Orleans-style brass band.

As the first winds whipped the waves over the pier on Monday, Zigun and his staff still hoped that they'd be able to go through with their plans for Halloween night. Zigun had written a play about a night watchmen "who works at a presidential wax museum who goes berserk after getting high and talking to all the presidents." On Thursday, a day after Halloween and two days after the storm, Zigun couldn't help smiling as he recounted what might have been.

Downstairs, theater employees were pulling strange wreckage out into the street. Casualties included sets, an antique jukebox, a 1970s Coney Island-themed pinball machine, and ghoulish mannequins. To the group's great relief, the museum on the second floor had been spared.

While the lights have turned on in lower Manhattan and limited subway access has resumed in parts of Brooklyn, here in Coney Island, the recovery has hardly begun. A cloud of uncertainty hangs over the future of the Wonder Wheel and the Cyclone roller coaster, the freak show, the arcades and the people. For now, rescue workers around the city are focused on saving lives, but the government has already begun taking stock of property damage. The people of Coney Island are worried that this odd, out-of-the-way, and often overlooked place will again be forgotten. Like everyone who values the history of this American icon, they believe these buildings and rides are worth far more than the old materials that they're made of.

Two days after the storm, Deno John Vourderis, the grandson and namesake of the founder of Deno's Wonder Wheel Amusement Park, was hauling pieces of debris out of an underground cavern where he'd stored parts of the park's historic rides. The Wonder Wheel was still standing, but water had now covered all of the old electrical equipment.

"We understand that people stuck in basements is the priority," Vourderis said, "but we're hoping that once everyone's rescued we can get some government aid. Without that, we're not going to be able to open."

Half a block away, Cesar Rafael, a burly 46-year-old who proudly said he was the owner of Coney Island's only horse race arcade game, was talking to a young recovery worker from the city. There in his windowless ground-floor apartment, nestled in the middle of a maze of arcade halls and other businesses, he climbed up onto a small kitchen counter.

"This is where I spent the f***ing night, right here," Rafael said. "Me here, my wife Crystal on the edge, my brother-in-law on the sink, my dog over here and one cat on each cabinet."

As Rafael kept repeating to the worker, he'd grown up on Coney Island and had been working there since the age of eight, when he got a job blowing up balloons on the boardwalk. A few years ago, he was priced out of his apartment in a building further inland, he said, so he moved with his wife and pets and his four motorcycles to the back rooms of the arcades.

While Rafael and his family were perched atop their kitchen counter, three employees of Coney Island USA were riding out the storm on the second floor of their 1923 theater. When the water began to rise, Stephanie, the snake charmer, sent them a text: "How are the snakes?" Debi Ryan, who runs the organization's business side, went downstairs with another employee.

"The water was waist-high, and all our Halloween decorations were floating," she said. "We had full, human-sized mannequins and body parts, and I'm like, 'Oh, this is awesome, because if we die, there will be all these bodies really, and they might not know which is which.'" The pythons were in their cages. "They were a little cranky," she said. Ryan and another employee carried them upstairs and draped their cases in velvet.

Coney Island is one of the birthplaces of American pop culture, and nobody knows more about this history than Charles Denson, a 59-year-old writer and filmmaker who grew up in the neighborhood and now splits his time between Coney Island and Berkeley. Denson has written three books about the neighborhood, and he recently opened a little history exhibit in a tiny space tucked underneath a carousel in one of the amusement parks.

His apartment is in the basement of a building in Seagate, a gated community on the tip of the peninsula. When the wave surge hit, Denson went upstairs to the second floor and turned on his video camera. Water was crashing against the windows, and from down the street he could hear the crunching and smashing of timber and the breaking of glass. As it turned out, the Sea Gate Beach Club, where people dance and play tennis, had been shattered to bits, and several houses had partially collapsed. Denson aimed the camera at his face, and with the dramatic flair characteristic of Coney Island lifer, proclaimed, "If the house doesn't make it, here's what happened."

The next morning, as Denson walked over to his exhibition space, he saw a scene of total devastation: sand covering the streets; reeking muck clinging to the walls of the buildings; someone dragging a boat down the boardwalk. The massive old sign of the Shore Hotel appeared to be hanging by a wire. He got to his museum and began pulling out the antique cameras and the old photographs, the wood and leather "kiddy cup" from a ride built in 1898.

The following day, Denson walked over to a glass bookcase and took out one of his books -- an account of how the master builder Robert Moses effectively helped turn "American's playground" into one of New York's roughest ghettos.

"Coney Island has been destroyed many times," Denson said. "It's burned to the ground, it's been destroyed by urban renewal, it's had fire storms, and it will survive this." 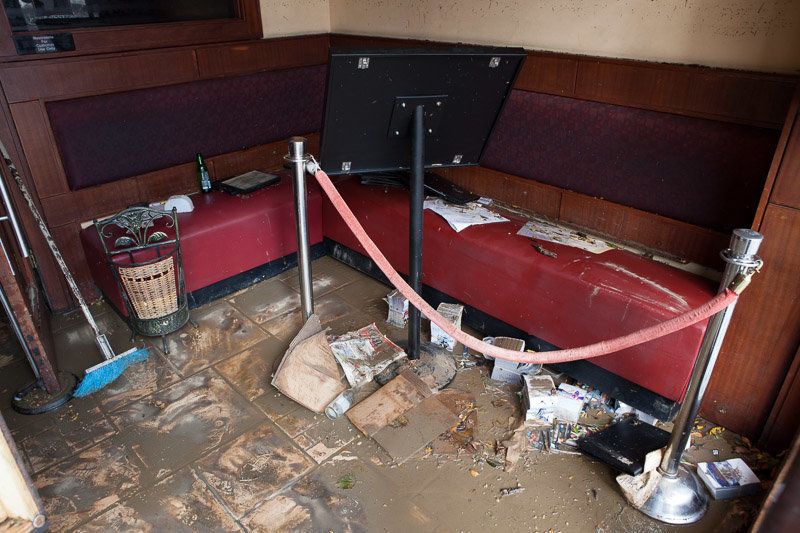