Now New York's governor is walking into the eye of a man-made disaster: the fiscal cliff. Cuomo went to Washington on Monday to ask the federal government for nearly $42 billion in Sandy relief. He wants $32.8 billion to help clean up the damage from the storm, and another $9 billion to help prepare for the next big one.

But getting that money will not be easy since Cuomo is competing against both deficit concerns and the needs of other states; New Jersey Gov. Chris Christie said his state endured $36.8 billion in damage.

On Monday, Cuomo and Christie issued a joint statement saying they were "committed to working together in a united, non-partisan effort with Congress and the Obama administration to bring aid to our states without delay, commensurate with the damage we sustained and in recognition of the importance of our economies, separate and combined."

"We need the full funding for our aid to arrive, hopefully before the end of the year," they said. "We are sure that we will require more aid in the future, but we need this full commitment now.”

As Cuomo pressed his case at the White House and in Congress, he likely brought along a long list of the destruction Hurricane Sandy wrought on his state.

According to the numbers Cuomo presented to members of New York's congressional delegation last week: 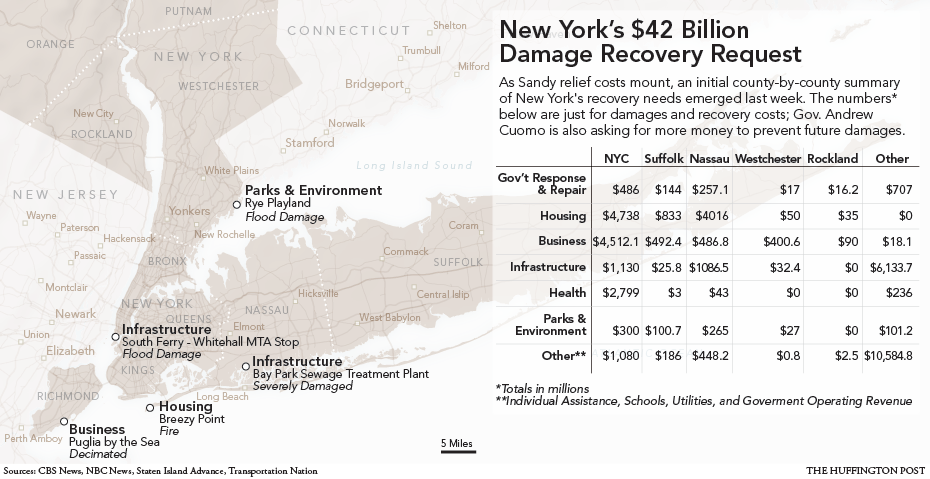