"Make no mistake about it, this is a devastating storm," New York City Mayor Michael Bloomberg said in a press conference on Tuesday morning. "Maybe the worst we have experienced."

New York City was one of the hardest hit regions. The storm surge pushed water levels up to a record-breaking 13.88 feet at Battery Park, on the southern tip of Manhattan, MSNBC reports. Water flooded subways, tunnels and the construction site at Ground Zero.

New York City MTA Chairman Joseph J. Lhota released a statement Tuesday detailing the damage from Hurricane Sandy on the NYC subway system. "The New York City subway system is 108 years old, but it has never faced a disaster as devastating as what we experienced last night," Lhota explains. "Hurricane Sandy wreaked havoc on our entire transportation system, in every borough and county of the region. It has brought down trees, ripped out power and inundated tunnels, rail yards and bus depots." On Monday night, seven tunnels under the East River flooded.

A back-up generator failed at New York University Langone Medical Center after a power outage, and patients had to be evacuated, ABC News reports. About 200 patients, 45 of whom are critical care patients, were led out of the hospital Monday night.

SCROLL FOR PHOTOS OF DAMAGE

Manhattan was not the only borough devastated by the storm.

Tidal surges from Sandy caused massive flooding in Staten Island, according to the Staten Island Advance. Nearly half of Staten Island is currently without power. A teenage girl was found dead in the debris at a Tottenville home early Tuesday morning.

In Queens, a fiery blaze ripped through the beachfront neighborhood of Breezy Point and destroyed between 80 and 100 houses, the Associated Press reports. More than 190 firefights rushed to put out the fire, which was reported at about 11 p.m. Monday. “The clouds were glowing from the intense flames,” resident Joe Jordan told the Wall Street Journal.

New Jersey, too, was hit hard by Hurricane Sandy -- particularly the Jersey Shore. Gov. Chris Christie said the wreckage is "beyond anything I thought I'd ever see." Adding, "The level of devastation at the Jersey Shore is unthinkable," according to CNN.

Atlantic City was transformed into a river Monday night when high tide put 85 percent of the city underwater, according to the Star-Ledger. Several hundred feet of boardwalk washed away. Many homes were flooded. About 82,000 people are currently without power in Atlantic County, mostly on the barrier islands, according to the report.

Seaside Heights is another badly flooded region of the Jersey Shore. The boardwalk took a beating, with a piece of the Jet Star roller coaster hanging in the Atlantic Ocean, according to a separate report by the Star-Ledger.

A levee broke in northern New Jersey, where hundreds had to be evacuated from flooded areas in Moonachie and Little Ferry, the Bergen Record reports.

At least 26 people have died in the U.S. as a result of the superstorm, according to CNN. Millions along the East Coast are without power. At around 9 p.m. Monday an explosion at a ConEd plant in Manhattan (14th Street and Avenue D) lit up the sky, knocking out power in most of the East Village and Lower East Side, the Village Voice reports. It will take at least "three or four" or "four or five" days for NYC's transit and power grid to be back up, Bloomberg said. 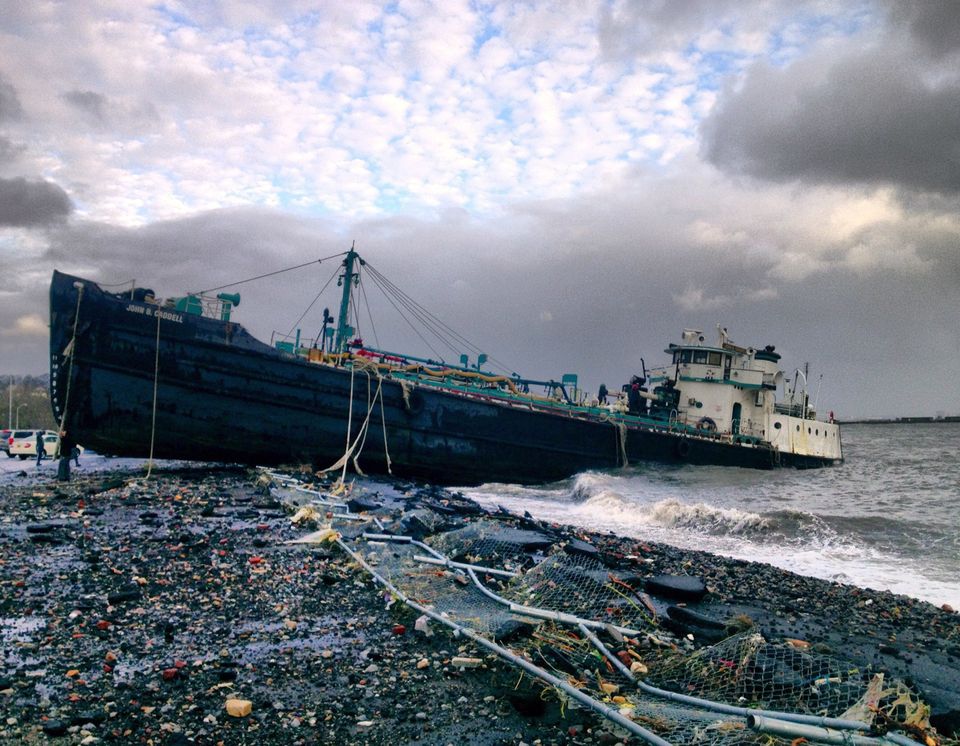