Hurricane Sandy caused destruction up the Eastern Seaboard from North Carolina to Maine, with much of the damage centered in New York and New Jersey. The Huffington Post has put together the following map of damage in those states.

This map is not complete and is an overview of major damage in the region. Outside of the New York metro region, wind damage, downed trees and flooding were reported throughout the Northeast, including in coastal Connecticut, Delaware, Washington, D.C., Maryland and northern Virginia. 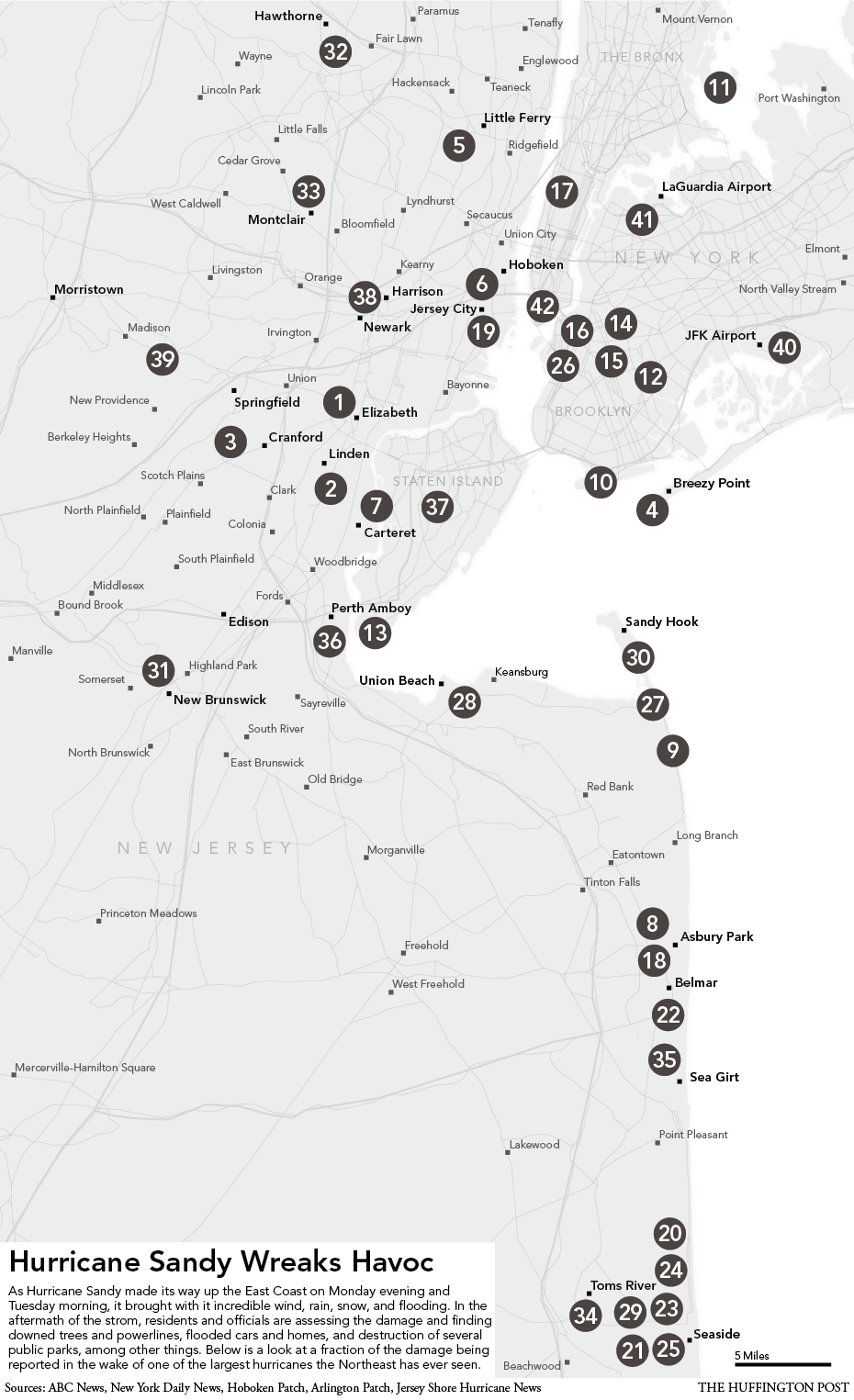 1. The marina in the port area of Elizabeth, N.J. was destroyed in the tidal surge in Monday's overnight hours, according to Union County, N.J. spokesman Sebastian D’Elia. He said the marina was “pretty much gone” and that the boats were scattered, along with the surrounding neighborhood sustaining damage.

2. Flooding from the tidal surge impacted 20-30 homes in the Trembly Point neighborhood of Linden, N.J., according to Union County spokesman Sebastian D'Elia.

3. Union County, N.J. saw downed power lines and trees throughout the western end of the county, with many communities experiencing power outages. Inland waterways in the county, including the Rahway River, did not flood like they did with Hurricane Irene, according to county spokesman Sebastian D'Elia.

4. At least 80 homes were destroyed in a major fire late Monday evening in the Breezy Point neighborhood of Queens. New York City firefighters had trouble reaching the neighborhood due to storm damage, the New York Daily News reported.

5. A levee breach caused flooding in Moonachie, Carlstadt and Little Ferry, N.J., with up to five feet of water, according to CNN. Hundreds had to be rescued.

8. Major destruction occurred in Asbury Park, N.J., including flooding, damage to the boardwalk and the collapse of a car dealership, News 12 New Jersey reported.

9. Rt. 36 along the Jersey Shore was closed due to debris in the roadway.

10. The New York Aquarium in the Coney Island neighborhood of Brooklyn flooded.

12. Trees were uprooted and fell on buildings in the Crown Heights neighborhood of Brooklyn.

13. Staten Island, N.Y. suffered a lot of damage, including downed trees in Tottenville, along with flooding and wind damage to houses on the South Shore.

14. A wall collapsed on a building on Quincy Street and Stuyvesant Avenue in Brooklyn, N.Y.

15. A tree was down at Bond Street and Dean Street in Brooklyn, N.Y.

16. A tree was down at Clinton Street and Second Place in Brooklyn, N.Y.

17. A tree was down on W. 102nd Street between Central Park West and Manhattan Avenue in Manhattan.

18. CNN reported that the southern part of the boardwalk in Asbury Park, N.J. and in neighboring communities to the south was destroyed.

20. Sand piled up in the streets in Seaside Park, N.J., which also suffered flooding and building damage.

21. There was severe damage to the rides at Funtown Pier amusement park in Seaside Heights, N.J.

22. There was major damage in Belmar, N.J. including flooding, beach erosion and wind damage to buildings.

23. Casino Pier and the boardwalk in Seaside Heights, N.J. were damaged, with a rollar coaster being pushed into the Atlantic Ocean.

24. Much of Seaside Heights, N.J. was flooded from Hurricane Sandy.

25. Ortley Beach, N.J. was flooded due to Hurricane Sandy.

26. Flooding occurred in waterfront neighborhoods of Brooklyn, N.Y. due to the storm surge.

30. Atlantic Highlands, N.J. was flooded during the storm.

33. Essex County, N.J. saw severe damage topple trees throughout the county, including those that fell on homes in Maplewood and South Orange. Power was out in several communities.

38. Flooding from the Passaic River occurred in both Newark, N.J. and Harrison, N.J. Most of Newark, including a hospital, was without power.

40 and 41. LaGuardia Airport and JFK Airport in Queens both were flooded in the storm. New York City Mayor Michael Bloomberg said at a briefing that runways at both airports could have been damaged from the flooding.

42. Lower Manhattan was flooded from a 13.88 foot storm surge. The flooding entered the subway system and led to power outages for most of the borough below 39th Street.