The setting is like one from a spooky movie: Arctic air, snow and rain, whipping winds and a full moon. In the days leading up to Halloween, however, the setting may be all too real if "Frankenstorm" touches down.

The Frankenstorm may hit the Northeast if Hurricane Sandy, currently in the Caribbean as a Category 2 storm, meets an early winter storm in the West with a blast of arctic air from the North, according to CBS News. Frankenstorm is likely to hit the East Coast next week, with New York City and New Jersey getting the brunt force.

“The guys in the government are calling it ‘Frankenstorm,’” a hybrid of a tropical system and a nor’easter, Tom Downs, a forecaster at Weather 2000 Inc. in New York told Business Week. “It is safe to say that there will be millions of dollars in damage.”

The mix of two storms creating the monstrous Frankenstorm is enough to ruin any Halloween. A hurricane gets power from warm waters while a nor’easter gets its power from differences in air temperature, Downs explained to Business Week. “So this is going to be a hybrid storm with wind flow over a wider area than a hurricane,” he said. “You’re not going to experience the massive damage in a concentrated area. Any damage is going to be more widespread but it isn’t going to be as catastrophic as a hurricane.”

The National Oceanographic and Atmospheric Administration is comparing Hurricane Sandy to two storms: the Great Gale of 1878 and Hurricane Hazel in 1954, the Boston Herald reports. The Great Gale was a Category 2 hurricane that hit regions from Cuba to New England. Hurricane Hazel killed 1,000 people in Haiti, then hit the U.S. between North Carolina and South Carolina and killed 95 more.

Track Hurricane Sandy and the storms movement up the East Coast with Google maps. (Story continues below.)

The National Weather Service does say that “there is continued low certainty with several days to go before being impacted by this system. Numerous possibilities remain on the table," according to the Boston Herald.

However, forecasters say there is a 90 percent chance the East will see powerful winds, flooding, heavy rain and possibly even snow starting Sunday and stretching past Wednesday -- just in time for Halloween, the Associated Press reported on Thursday.

The worst of the Frankenstorm should hit early Tuesday, but it could stretch into midweek, CBS News reports. "It's almost a weeklong, five-day, six-day event," National Oceanic and Atmospheric Administration forecaster Jim Cisco said Thursday. "It's going to be a widespread serious storm."

Hurricane Sandy pummeled eastern Cuba and has moved onto the Bahamas. As of 2 p.m. on Thursday, the center of the storm was located about 25 miles east of Great Exuma Island, and about 125 miles southeast of Eleuthera with max winds of 105 mph, WXIA reported. Weakening is expected, but Sandy is likely to remain a hurricane when it passes the Bahamas.

Last year, another Halloween storm hit the region, causing heavy snowfall in some areas. Significant damage occurred as trees were weighted down by snow and leaves, which had not fallen off yet. Thousands of homes and businesses in the Northeast were without power for a week. 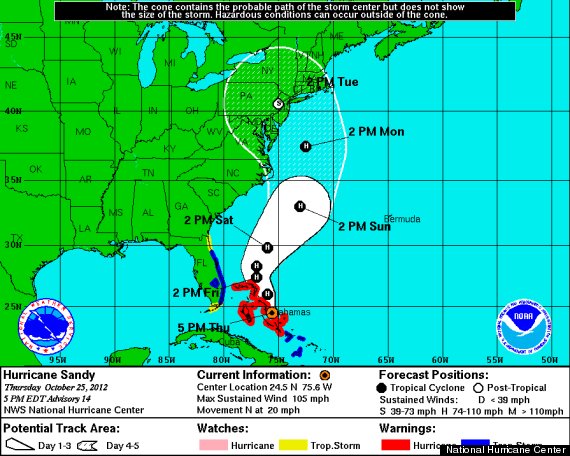 Check out Twitter reactions to the possible impending Frankenstorm in the slideshow below.