The millions out of power in areas affected by Superstorm Sandy have been struggling to find gas stations still open with resources. But one group of high school students in New Jersey have -- overnight -- devised a solution.

Members of IMSOCIO at Franklin High School gathered Wednesday night to launch a crowdsourced map that locates open gas stations in the New York-New Jersey area. Stations are identified by green, red or yellow pins -- each representing an open, sold out or charging station.

The map has now identified nearly 100 stations in the area, and has garnered attention from local news stations -- so much so that the site crashed for a few hours Thursday afternoon due to high traffic. Dayana Bustamante graduated from Franklin High this May and now attends Raritan Valley Community College in Branchburg, N.J. She remains active in IMSOCIO -- short for Scholars Organizing Culturally Innovative Opportunities -- and has been the most vocal online advocate of the group's latest mapping initiative.

"I'm a bit shocked, I didn't think it'd be such a big hit," Bustamante told The Huffington Post Thursday afternoon. "We started this up last night, we just wanted to help. It was a small idea, I personally needed gas, we all needed gas. So we started out with five points and just had more friends and high school students get involved."

The group started as a summer program for underprivileged students, particularly those of Latino backgrounds, to keep them academically engaged during school off-months, IMSOCIO organizer Wansoo Im says. The Rutgers University adjunct professor leads the teens in planning projects that map the community.

"This is a service learning project, by using community mapping students can use technology to serve the community," Im told HuffPost. In the past, IMSOCIO members have created maps that, for example, chart out safe routes to school.

The IMSOCIO team has received an influx of emails and Tweets supporting the gas station map project. What makes the site especially appealing to users, Bustamante says, is its ability to immediately accept updates from the public and its availability on both desktop and mobile platforms. The team is also taking tips via Twitter.

"If there's anything wrong, people can always update and say they only accept cash here or they ran out of gas here," Bustamante said. "You can't really fail."

Meanwhile, 13 of the area's 33 fuel terminals were closed Thursday, severely limiting gas stations' access to fuel. Thousands of stations in New Jersey and Long Island were also closed due to power outages.

As images of massive lines of cars waiting for gas permeated the media while thousands scrambled to find operating stations Thursday, those on Twitter thanked the Franklin High teens for their work -- and directed Newark Mayor Cory Booker and New Jersey Gov. Chris Christie to the site as well.

@dzoraida06 thank you so much for continuing to share this info. This map really helps me not only find gas but calms my nerves :)

Franklin High's project isn't the first to offer a map on Sandy relief. One out of the University of Washington maps various aspects of damage while another focuses on gas stations in New York City.

And after the New Jersey Office of Emergency Management published a list of available resources, the ENTCHEV Geographic Information Systems blog plotted open gas stations in a Google map based on the list, updated as of Thursday afternoon. Newsday has also published a map of stations with fuel available based on information from Wright Express, a company that handles credit card transactions for gas stations. The information is updated as of 3:30 p.m. Thursday and only includes stations that Wright works with.

And as schools across the country grapple with teaching for cut-and-dry standardized tests, the IMSOCIO students are applying their lessons in the real world -- and being motivated by the community's response.

"I think one of the good things is the kids got really excited, they realized they can make these changes in the community," Im said. "The students got encouraged and hopefully as people find out about this we can do this kind of project all over the country." 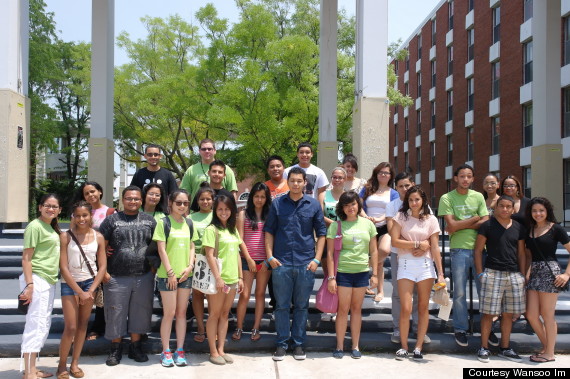 *************************
The Huffington Post is eager for insights from our community, especially people with experience in power, infrastructure and engineering, on the adequacy of emergency preparation in advance of Hurricane Sandy, and the degree to which past disasters have informed adequate planning and construction. Please send a note to sandytips@huffingtonpost.com with insights and suggestions for the important questions that need to be asked of relevant private sector and government officials, and point us toward stories that need to be pursued.