ConEdison, New York's primary service for electricity, reports that outages affecting more than 800,000 in its service area, which covers the New York City boroughs and Westchester County, NY, and extends from Staten Island all the way to Ossining in Westchester. (The map below shows only affected neighborhoods in New York City and surrounding boroughs.)

According to Reuters, 20 percent of New York City was blacked out on Tuesday. When a substation exploded in downtown Manhattan Monday night and sent more than 250,000 into darkness, astonished residents took pictures of the eerily dark Manhattan skyline.

But New Yorkers are suffering from blackouts related to more than just the storm's wind and flooding. Late Tuesday night, ConEdison reportedly cut power to more than 160,000 homes in Brooklyn and Staten Island because of storm-related issues on high voltage systems.

Major Internet, television and phone provider Verizon saw major damage to its telecom equipment located in Lower Manhattan, Queens and Long Island — areas that saw some of the worst of the storm's surge floods. On Wednesday afternoon, Verizon had not yet released an estimate of how many customers were affected by the outages, but the company told Reuters on Tuesday that anyone affected has suffered a complete loss of all services. Several other cell phone providers, including AT&T and Sprint, say that service is spotty in areas hit hardest by the storm.

At the time of writing, more than 600,000 ConEdison customers in New York City's five boroughs remain in the dark, though ConEdison reportedly believes service will be restored within four days for many Brooklyn and Manhattan customers whose power lines are underground. For others, service may not return for more than a week.

Take a look at the map (below) of New York City's power outages. Then, check out our map showing the other states where Hurricane Sandy knocked out power. 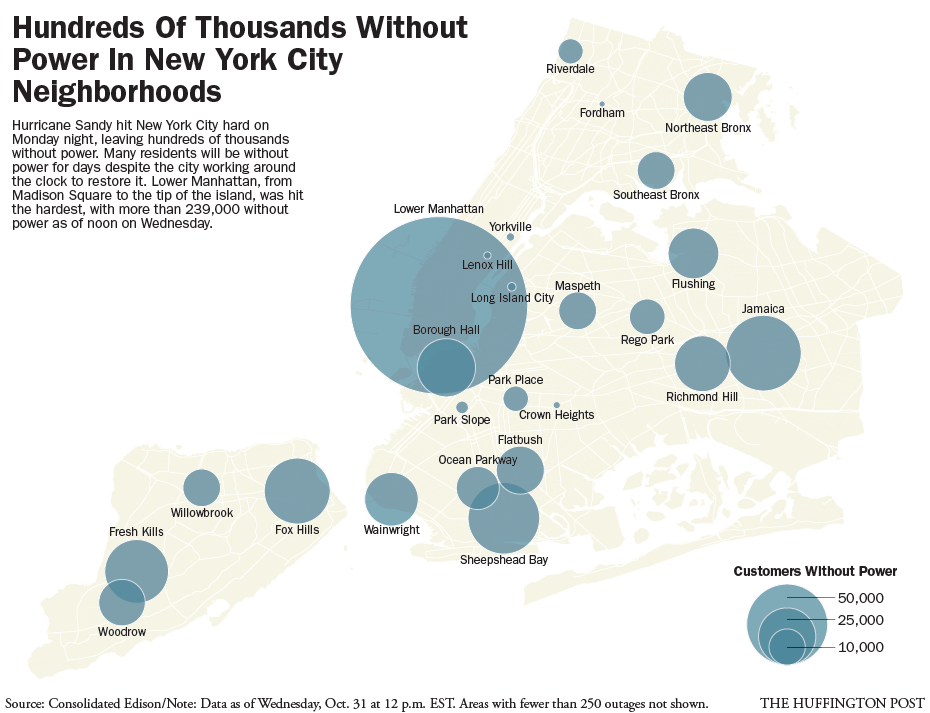