NEW YORK -- Nearly a full week after Hurricane Sandy made landfall, more than 1.3 million electricity customers from West Virgina to Connecticut are still without power as temperatures plunge below the freezing point at night.

Electrical utilities are turning into punching bags for elected officials and ordinary residents alike. A gathering Nor'easter storm, meanwhile, threatens the same region affected by Sandy with high winds, heavy rainfall and, in some regions of Appalachia, snowfall as early as Wednesday. The storm could further complicate power restoration efforts. 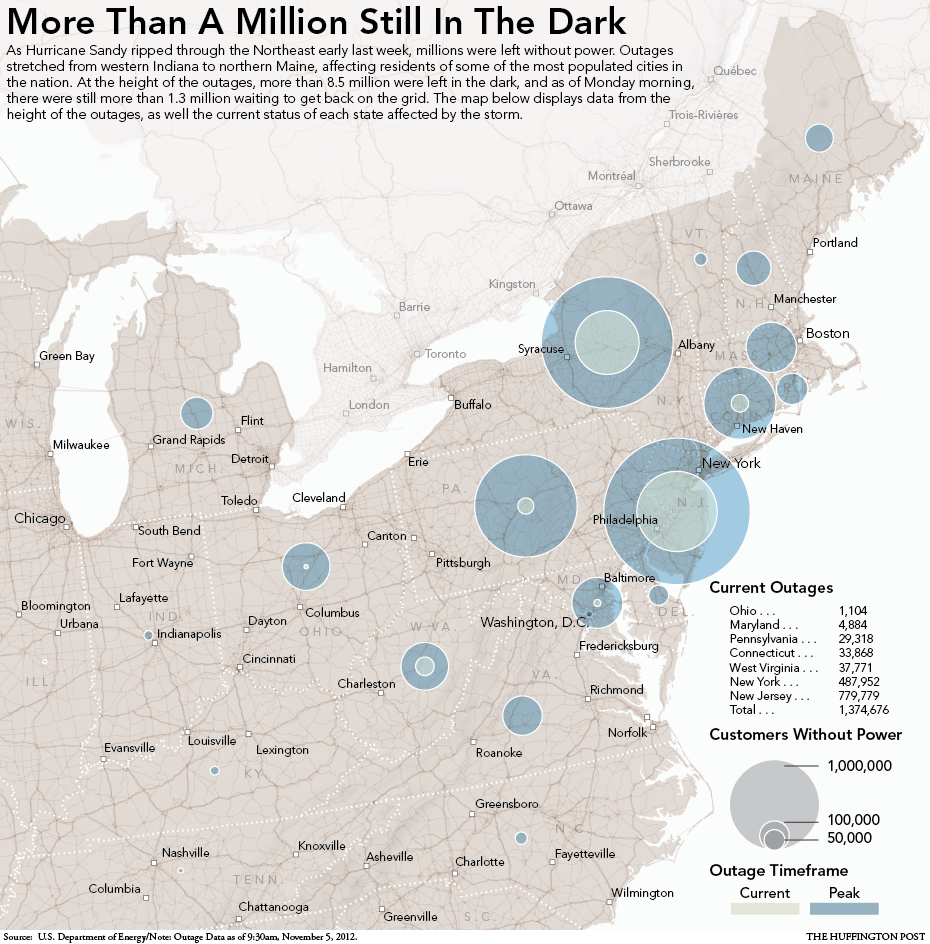 In New York City, Mayor Michael Bloomberg said on Saturday night that the two-week-long restoration times proposed by the Long Island Power Authority (LIPA) for parts of the Rockaways are "unacceptable." The city warned that temperatures had fallen so low that seniors and others were at risk of hypothermia, and urged those affected to seek city shelters or warming centers.

LIPA says on its website that it has 11,000 workers trying to restore the power and that 90 percent of its customers would be back online by Wednesday.

In New Jersey, 37-year-old Eric Helders of Edison lost power during the storm and did not get it back until late Sunday evening. To add insult to injury, when he placed a call Thursday to his utility company, PSE&G, which still has 375,000 people without power as of Monday, he was told that he did have power.

"I said, 'Do you think I'd be calling you if I had power?'" he recalled early Sunday evening. "Like everybody else, we've got a lot of old people and kids on the block. I myself have a 2-year-old, and we're freezing our asses off."

Two hours after talking to The Huffington Post, tragedy struck Helders' block. A neighbor's house just a few doors away burned down. Fire trucks rushed to the scene, and he overheard one first responder say, "Goddammit, I can't see a thing."

Within an hour, a PSE&G crew was on the scene, fixing things up, Helders said. A request for comment to the utility company was not immediately returned. The township's police department said that the fire was caused by a surge from an electrical generator being used because the power was out, and that smoke and water damage have now left the residence uninhabitable.

Downed trees, live wires and damaged houses have complicated the utility companies' efforts to restore power. In many low-lying coastal areas, flooding from Sandy's storm surges may have reached fuse boxes or transformers, forcing the companies to undertake painstaking house-by-house inspections before they turn power back on.

The Edison Electric Institute, the industry's trade association, says utility workers from as far away as Hawaii have been involved in the 24/7 effort to restore power across the region. A pair of incidents from the weekend highlighted the dangers facing the workers: a PSE&G lineman was electrocuted by a live wire on Saturday, and a New York City sanitation worker on Staten Island Sunday was likewise sent to the hospital after getting shocked by electricity.

The power outages have also contributed to a climate of fear in some places. In Long Beach, N.Y., where National Guard troops patrolled the street and the city instituted a "strict" 7 p.m. to 6 a.m. curfew, one resident told HuffPost that he had slept with a licensed, loaded .357 next to him for much of the week after Sandy because he feared looters. 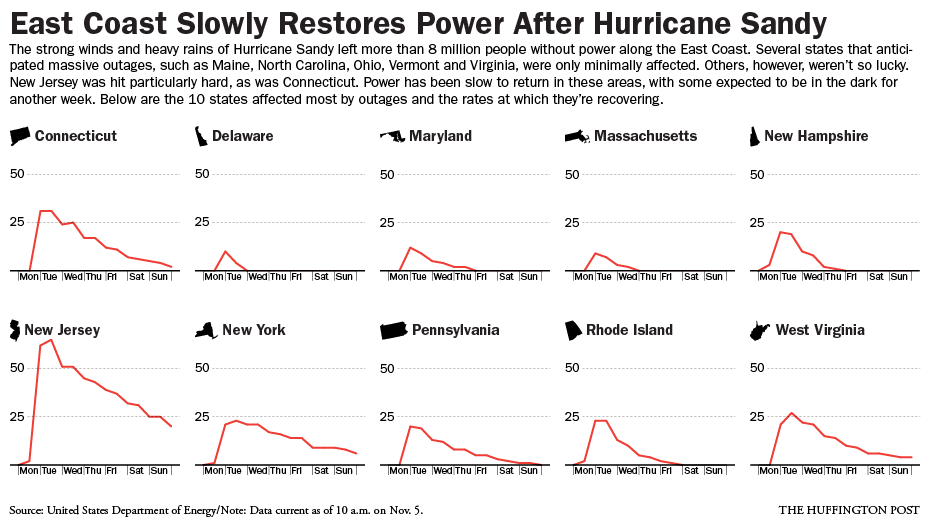