As the news media prepared for the impending Hurricane Sandy, you could almost feel the Twittersphere gearing up. Folks were claiming names, video sites were preparing for a storm-surge of content, and viewers were expecting a "two-screen" experience as they planned for power outages and storm damage.

Despite the expectations, the changes in news media around Hurricane Sandy surprised me in a number of ways. In particular: their speed, volume, and news value.

Mainstream media no longer tried to ignore the power of social media; instead, they used the crowd-sourced information to feed (and in some cases mislead) their audiences. On the local news stations, anchors literally held their phones in their hand, scrolling through tweets as they ad-libbed their way through their newscasts.

Weathercasters dutifully warned their viewers not to go out into the storm, even as they clearly enjoyed the drama and danger of the whipping winds. Audience members mostly stayed indoors, but the few that ventured out were rewarded with video that clearly became viral and often got picked up by local and national news.

But perhaps the most surprising was the volume -- the sheer volume of video that made its way unfiltered onto the web.

Once it was clear that I couldn't count on YouTube to be my source of video, there was just too much -- the answer was the need for a curated collection. Cataloged, categorized, and organized.

That was when the real surprise was clear.

In curating the collection for http://hurricanesandy.magnify.net the quality and diversity was abundantly clear. Video from CNN, the Associated Press, the Weather Channel, Reuters, PBS, 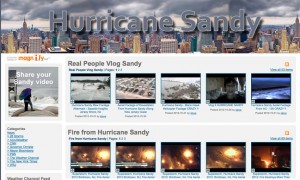 AccuWeather, The Wall Street Journal, and WPIX stood next to feeds from the Bloomberg administration, New Jersey Gov. Chris Christie, and live feeds from the White House. And then there was the video from real people. Average folks who were witnessing the weather in real time, and posting their video alongside the professional sources.

In particular, Mayor Michael Bloomberg's decision to live webcast his updates provided viewers with a complete, unvarnished access to the city government in action -- along with Bloomberg's direct, no-nonsense style and comprehension of the events and issues facing the city.

Today, the HurricaneSandy.magnify.net site has more than 9,221videos -- and growing. But organized -- by date, subject, source, and searchable. Users can filter the news the way they want, including adding their own video to the site -- sharing their voice.

So, the question is: Does this replace professional journalism? Far from it. UGC Newsgathering adds sources, point of view, and reach. But it also adds noise, and inaccuracy, and fakes. Tons of fake PhotoShop images. Tons of false reports about water on the floor of the stock exchange, or other rumors amplified by the speed of the social web.

So, going forward, we need the power and voice of UGC news, as well as the curatorial tools and fact checking chops of working Journalists to help us filter signal from noise.

Welcome to the new world of media, where the volume is massive, and the filters are human. It's a new way to think of news, but it's the way we're going to in the future.