NEW YORK -- On Tuesday morning, Keith Patterson was watching the news at his fiancee's house in the Bronx when he realized that his own home had been bashed by Hurricane Sandy. A reporter was standing inside his hallway in Rockaway, Queens, discussing the structural integrity of the interior walls. Through gaps in the walls, Patterson could see pictures of his family.

He rushed home to salvage what he could, but the water had surged above waist level and everything from his shoes and clothes to his furniture and books had been tossed around. Patterson spent the afternoon packing up what he could and now plans to leave the neighborhood for good. "I'm done," he said.

The Rockaway Peninsula, an 11-mile strip of two-family homes and public housing projects facing the Atlantic, was among the New York communities hit hardest by the storm on Monday night. Some 80 homes burned down in Breezy Point, a close-knit working-class neighborhood at the tip of the peninsula, but that was just the most devastating example of the widespread serious damage in the area.

It's hard to overstate the contrast between the destruction in Rockaway and the post-storm scene in other parts of the city. While just a few miles inland, stores were open and bustling, and people were going about their business as though nothing had happened, residents of Rockaway were gathering on the beach, where waves had ripped the boardwalk from its concrete mooring and smashed it into the beachfront homes.

At one point, according to residents who disobeyed a mandatory evacuation order and rode out the storm, as much as four feet of water covered the island. By late afternoon on Tuesday, the water was rising again.

Loretta Siegerman, who lives on the 11th floor of a high-rise building facing the ocean, said she heard the boardwalk breaking up and then saw part of it fly into her building's brand-new lobby. The sound was "unreal," she said. Pieces of the boardwalk ended up in the pool.

Elsewhere on the peninsula, the storm had turned streets into shallow canals. Miles of parked cars had been pushed onto the curbs, and one SUV sat partly balanced on a fire hydrant. The sand had been swept so far up from the beach that it was hard to tell where the sidewalk ended and the beach began.

Like some of the other waterfront neighborhoods that bore the brunt of the storm, including Red Hook and Coney Island in Brooklyn and the Newtown Creek area on the border of Brooklyn and Queens, Rockaway hasn't completely shared in the prosperity that has lifted the rest of the city in recent decades. And like other areas on the fringes, the neighborhood has a disproportionate share of people who pay their rent with help from government programs, including Medicare.

At the Rockaway Care Center, a nursing home, some 200 residents lost power for nearly 24 hours and were moved to higher floors as the first floor flooded. According to a nursing home administrator, who declined to give his name, the staff evacuated residents with pressing medical issues on Sunday, but most of the residents there and in at least two other nursing homes in this part of the city stayed put. One worker, who didn’t want to give his name, said the scene outside the windows was surreal.

"It was like you were sitting in a building in the middle of the sea," he said.

About three years ago, after the city lifted a ban on surfing at Rockaway Beach, the neighborhood began attracting new businesses and visitors, a development that has prompted some to dub it the "Hipster Hamptons." The Boatel, a floating inn docked at one of the local marinas and a lynchpin of the recent revival, survived the storm without any visible damage, but dozens of other vessels in the marina and on the dry docks sank or landed on top of each other. Ari Zablozki, the owner of the management company that runs the marina, estimated that the storm could cost him $150,000.

About a mile north, Matthew Ross and his brother were dragging soggy clothes out of their dark basement apartment by the light of a single gas burner. The water had soaked everything -- clothes, bed, stereo equipment. Ross had found shelter from the storm at a local hospital.

But he said, "I don't know where I'm gonna stay tonight."

Rockaways Face Widespread Destruction: It Was Like Sitting 'In The Middle Of The Sea'
Hurricane Sandy Devastates Rockaway Beach, N.Y. 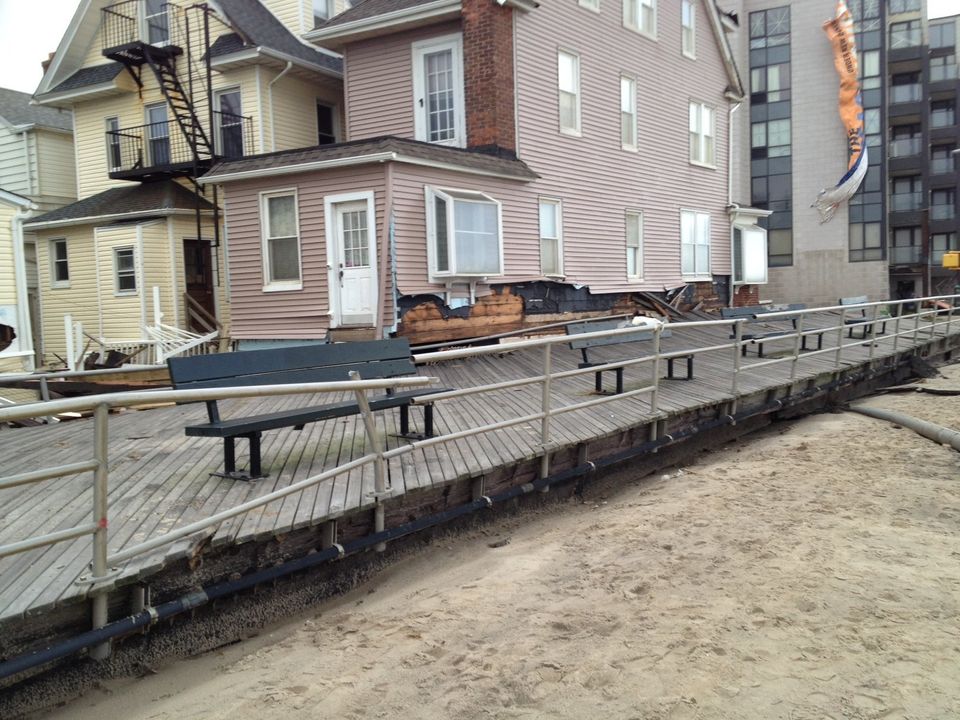