NEW YORK -- Two days after Hurricane Sandy walloped the East Coast, electrical utility companies warned hundreds of thousands of customers from Long Island to New Jersey that they may be left in the dark for more than 10 days.

Critics said cost-cutting was holding back recovery efforts, and long-term planning around climate change and extreme weather is lacking. The industry pointed to downed trees, knocked-out facilities and the devastating reach of the storm to explain the duration of outages.

"You cannot make infrastructure hurricane-proof. We had a nine-foot storm surge on top of high tide. You cannot protect your infrastructure against that sort of damage," said Chris Eck, spokesman for Jersey Central Power & Light, which had 940,000 customers without power Wednesday.

But several utility and climate experts maintained that utilities, faulted in many places for their response to Hurricane Irene a year ago, should look further back in geological history, and further ahead toward the destabilizing effects of global warming, as they prepare for natural disaster.

In New York City, researchers warned in 2008 that the shoreline was highly vulnerable to a massive surge. Brian Colle, a professor of atmospheric science at the State University of New York at Stony Brook, said higher surges could have been foreseen by looking at geological history.

"If you're planning for New York City to be around for more than 100 years -- which I would hope so -- then I think it's prudent to have a flood mitigation plan or strategy that goes beyond 100 years," Colle said.

For some utility customers, the storm presented life-threatening situations. That was apparent in Manhattan, where NYU Langone hospital lost its backup generator and had to be evacuated in the midst of the storm. Some 643,000 people in New York City were still without power Wednesday afternoon.

One major culprit: a ConEd substation just off the East River on 14th Street that dramatically exploded on Monday night when it was flooded after a storm surge from the East River propelled by the hurricane. The substation's continued unavailability may demonstrate the short timeline on which many utilities look into the future. The design limit for ConEd's crucial substation, which served 250,000 customers, was a 12.5 foot surge of water -- above the highest in recorded history.

"Nobody predicted it would be that high," ConEd spokesman Allan Drury told the Associated Press.

Utilities were repeating the refrain up and down the East Coast: ConEd said it had experienced its "worst storm damage ever." In New Jersey, the president of utility company PSE&G said service outages of seven days or more were inevitable "given the destructive nature of this storm."

The Edison Electric Institute, the main industry association, said utilities were calling up an "army" of 53,000 workers.

The question of how long people remain without power may depend on manpower.

Seth Guikema, an assistant professor in the department of geography and environmental engineering at Johns Hopkins University who correctly predicted the massive number of people left powerless by the storm, said that when it comes to outage duration, "a big driver is how many crews the utility has relative to the number of outages they have."

Energy consultant Steve Mitnick argued that more of those crews should have been on each company's payroll in the first place, instead of called in from other states. Even if utilities' cannot prevent an act of God, they can respond to it more quickly, he said.

"Obviously these storm events are big, okay? No question about it," Mitnick said. "But to say you don't have the means to start investing more -- that's absolutely not the case."

He had a "very practical" solution for getting power restored more quickly: "people. Boots on the ground."

"Those guys from Missouri, they don't know the neighborhoods of New Jersey," said Mitnick. In Japan and Europe, Mitnick argued, outages of more than a day are exceedingly rare, despite weather events as varied as typhoons and earthquakes, because they have large workforces available for stormy duty. Utilities companies, regulators and members of the public there have decided that they demand more service reliability.

That reliability capacity comes at the price of higher utility bills passed along to the customer, Mitnick admitted. But he argued the cost of more manpower, backup equipment, and redundant facilities would work out to perhaps a dime a day.

A notable example of not spending those dimes in Mitnick's mind: that utility substation in New York.

Finding higher ground for a massive substation in the middle of one of the nation's most expensive real estate markets would undoubtedly involve much money and political capital. Mitnick argued that at least in the short term, a simple solution would be building limited backup stations elsewhere.

In general, Mitnick said, "cost-cutting consultants" have brought "incredible economies" to the utilities industry -- changes that were accelerated by deregulation. But the scrimping has now produced an economist's worst nightmare, as week-long blackouts diminish productivity in the Internet era. Not to mention the logistical headaches and possible life-threatening situations for utility customers.

"There's a recognition that severe weather events are more frequent, they're more varied, they're more severe," regardless of whether think of those events in terms of climate change, said Thomas Getz, former New Hampshire Public Utilities Commission chairman. That should translate into more investment, he said.

Overall, the industry argues it needs more funding -- and that the government should help, investing in "smart grid" technologies like electronic meters. Smart meters could allow companies to more quickly assess where power has gone out.

Underinvestment in the grid, according to a 2009 report card from the American Society of Civil Engineers, could lead to more problems when disaster strikes.

"Public and government opposition, difficult permitting processes, and environmental requirements are often restricting the much-needed modernization," the report found. The ASCE predicted that $1.5 trillion to $2 trillion in electric utility investments will be needed by 2030. 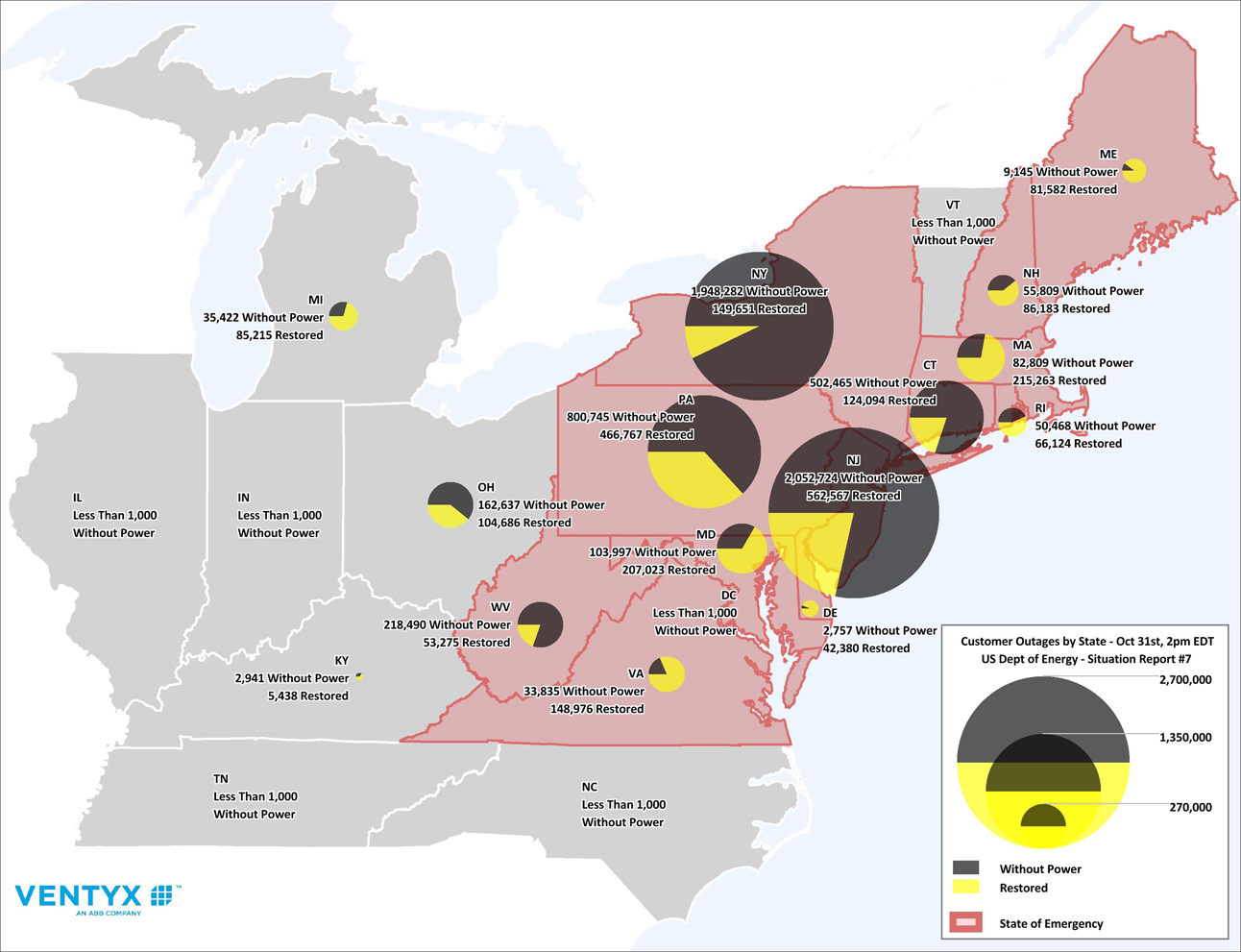 Power outages as of 2 p.m. Wednesday.

'ENTIRELY OUT OF CONTROL'

Everywhere Sandy hit, utility companies and customers were grappling with hard questions about storm response. The storm has plunged more than 6 million Americans across a large swath of the mid-Atlantic into the dark for a third day.

Adding to the general frustration, some companies haven't even told customers when the power will turn back on.

"Until we complete our assessment of the whole system, it's difficult to say," Eck, of Jersey Central Power & Light, told HuffPost. By Wednesday evening, the company was telling Twitter followers they might have to wait an entire week.

In New York City, restoration would take from three to seven days,, depending on whether power lines were buried, ConEd said on Wednesday.

Gail Worley, one of 1.8 million New York state residents without power, lives a block from the ConEd substation that exploded from flooding.

Worley sat on her neighbor's stoop as the water poured down 14th Street at around the same time her power shut off Monday evening. She said she had heard it might take a full week for power to return.

"It was frightening because you don't know what you're seeing," Worley said. "It's entirely out of control."

Two of the biggest causes for outages were flooding and downed trees.

New Jersey's PSE&G intentionally cut off service to 500,000 customers due to flooding in a handful of substations. The move, which affected residents of Newark and Jersey City, was intended to protect PSE&G's electrical equipment.

During Hurricane Irene, rainfall triggered flooding. "So this year we sandbagged our stations and took precautions at the substations that flooded last time," said PSE&G spokeswoman Karen Johnson.

This time around, flooding was a result of storm surge, which can come with great force and immediacy. "There's not much you can do to protect against that," Johnson said, adding that substations that flooded last year fared well during Sandy.

In Connecticut, a spokesman for Connecticut Light and Power, Frank Poirot, reported that more than 90 percent of the outages were caused by trees. After an early snowstorm in October 2011 that affected almost 1 million residents, CLP doubled its tree-trimming budget to almost $54 million for this year. Still, roughly 660,000 customers lost power during Sandy and less than half have been restored.

“As much as we like the environmental and aesthetic benefits,” Poirot said. “We know that [trees] are in conflict with our need to deliver electricity and energize the economy.”

Other companies appear to have been more successful. Officials in cities served by National Grid in Massachusetts reported a marked improvement since Irene and noted that “pruning trees before the storm hit helped prevent limbs from falling on power lines and causing blackouts.”