Let's face it. We Baby Boomers made a total hash of democracy, hoisting it aboard a runaway train of unfunded entitlement spending with the throttles on full. Then, rather than address the problem, we got the engineer and conductor brawling over how much the first class passengers should tip the porter. But despite the mess we made, we sure have held on to one important skill. Man, are we good at suckering the young into impoverishing themselves to pay for our folly. 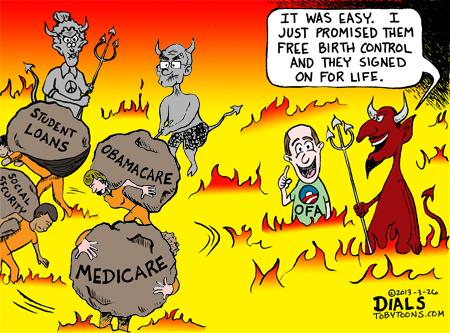 Sure, we infantilized them right up into adulthood, making sure everyone got a ribbon, no one got bullied, and scheduling every moment of their young lives to deprive them of the time to question the wisdom we bestowed upon them. We showered them with electronics, taught them how to practice safe sex the moment they turned 12, signed them up for SAT prep courses, edited their college essays, and hovered over them -- all to make sure they adjusted to life without us when they got to college.

In the process we turned them into docile entitlement piggy banks. In fact, we trained them so well that every time politicians ask for their support so they can be whacked with yet another lifetime financial burden designed to benefit their elders, their response is, "Thank you sir, may I have another!"

We load them up with college debt and then throw them into a job market that places little value on their liberal educations. "Thank you sir, may I have another!"

Though young and healthy, we demand that they pay the health insurance bills of the old and infirm. "Thank you sir, may I have another!"

We raid their paychecks to pay for decades of retirement for aging boomers who didn't save enough to take care of themselves. "Thank you sir, may I have another!"

We clamor to raise the minimum wage to make sure that unskilled youth can't compete with entrenched and experienced older workers. "Thank you sir, may I have another!"

We tell them to blame their woes on the 1 percent, and that they should vent out their frustrations by chanting slogans favoring policies that can only deliver them into a lifetime of servitude. "Thank you sir, may I have another!"

Pretty neat trick, huh? It helps that the most progressive among our generation controls the educational establishment that puts forth the above admonitions. What could be more effective at indoctrination than 16 unchallenged years to teach young people that feeling is better than thinking, that intentions are more important than results, that when a public policy fails we should do more of it, and that giving unto others is the highest virtue? This makes it so much easier for us to pluck them naked without too much squawking.

From the comfort of our 4,000-square-foot McMansions, we convince them that it's trendy to live in 400-square-foot rabbit hutches. That they don't need cars while we spend ever more on our own. That inheriting money is wicked, passing tax laws to make sure they don't get any. That traditional virtues like thrift, independence, and self-reliance are outmoded, that it takes a village, and that the next generation will take care of them just like we are forcing them to take care of us. Then we make it unaffordable for those few young people who are so inclined to raise families of their own.

We gush when they prattle on about saving the whales, saving the disenfranchised, and saving the planet, then make it impossible for them to save for their own future. We convince them to worry about computer models that claim to predict the weather 100 years from now while we urge them to ignore the signs of an economic collapse lurking right around the corner. We mortgage our country's future then sign them up to make the payments. And after all this we swell with pride when they provide the margin of victory for politicians who have picked their pockets so cleanly that they don't even know they've been robbed. "Thank you sir, may I have another!"

It's hard to know how they will respond when they are ultimately forced to forage in garbage cans like the bankrupt Greeks. Watch out, fellow Baby Boomers. If the day comes when the youth of this country wake up to understand their own interests and make their voices heard, there will be hell to pay.

But, as Lord Keynes said, perhaps it won't matter because we'll be dead by then. Meanwhile, isn't it nice that we can buy them off for the price of a pack of condoms?