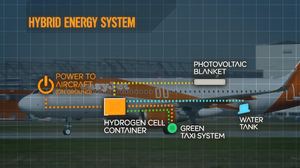 Despite oil prices plummeting in the past year, fuel remains a considerable cost for airlines around the world, and especially so for low-cost carriers that operate on wafer thin margins.

easyJet are planning to improve the fuel efficiency of their fleet with a new zero emissions hydrogen fuel system. They claim that the system will save approximately 50,000 tonnes of fuel each year.

The company is committed to cutting the carbon footprint of its flights by 7% by 2020, which itself follows a reduction of 28% over the last 15 years.

This, combined with the high occupancy rate of most easyJet flights make it one of the greener airlines. The company claim that the carbon footprint of their flights are around 22% lower than traditional airlines.

The project has built on a previous collaboration with Cranfield University that asked students to propose ideas for how air travel might evolve.

A trial is due to take place later this year to test the hybrid concept out. It consists of a hydrogen fuel cell stored in the hold of the craft. Energy is then captured as the aircraft brakes upon landing, with this used to charge an array of lightweight batteries when the craft is on the ground.

In many ways, it's similar to the Kinetic Energy Recovery System (KERS) found in Formula 1 cars.

This captured energy can then be used by the craft to preserve energy from the jet engines. It's believed that approximately 4% of the energy used by the airline is consumed whilst taxiing, so this new system has considerable potential.

It's believed that the system will reduce, or ideally remove completely, the need for tugs to manoeuvre the aircraft around the airport, thus making turnaround more efficient.

The only byproduct of the system is clean water that can be reclaimed and used by the aircraft's water system during the flight.

"The hybrid plane concept we are announcing today is both a vision of the future and a challenge to our partners and suppliers to continue to push the boundaries towards reducing our carbon emissions," easyJet say.

The project is part of an ongoing three year partnership between easyJet and Cranfield that was signed last year, which will see knowledge and innovation shared between the two.

It's believed that the new craft will go into service around June 2017.