Late Monday afternoon, after a year of mystery and speculation, billionaire Elon Musk revealed the plans for the "Hyperloop," a so-called "fifth mode" of transportation "after planes, trains, cars and boats."

The "Hyperloop Alpha," as Musk dubbed the first design, would be a solar-powered, elevated transit system capable of transporting people from Los Angeles to San Francisco in only 30 minutes, according to Musk's interview with Bloomberg Businessweek and a 57-page PDF explaining the Hyperloop on the website for Tesla, the electric-car company helmed by Musk.

Musk, a co-founder of PayPal and co-founder and current CEO of SpaceX and Tesla Motors, has confirmed that he will not have the time to make the Hyperloop himself, but hopes others will take up the plans or offer improvements and feedback. During a live conference call following the reveal however, Musk said he will "probably" build a Hyperloop prototype.

For Musk, the Hyperloop is best used when traveling between cities less than 1,000 miles apart that have considerable traffic on the ground. Travelers would also avoid the long wait times during check-ins, takeoffs and landings necessary for air travel.

Musk told Businessweek that he became inspired to think about reconfiguring public transit after becoming frustrated of the $70 billion construction of California's high speed rail system, set to begin this summer. Citing slow speeds, inefficient costs and logistical nightmares involving land rights, Musk began work on the Hyperloop idea, claiming it can be four times faster than the train system -- nearly 800 miles per hour -- at one tenth of the cost. Musk estimates the cost of the Hyperloop running along California's I-5 to be $6 billion for the passenger-only model and $10 billion for the larger model capable of transporting cars.

The Hyperloop would transport people through aluminum pods enclosed inside steel tubes. The pods would be spaced 50 to 100 yards apart, with the pods able to transport both cars and people. To withstand high pressure and heat, the pods would be mounted on thin skis made of trusted SpaceX material inconel. Operating at low pressure will allow the Hyperloop to avoid normal speeds or operation in a complete vacuum, with air jet inlets at the front of the pod feeding air to an electric turbo compressor that would compress air from the nose and funnel it to the skis and cabin.

Check out an artist's rendering of a Hyperloop pod below: 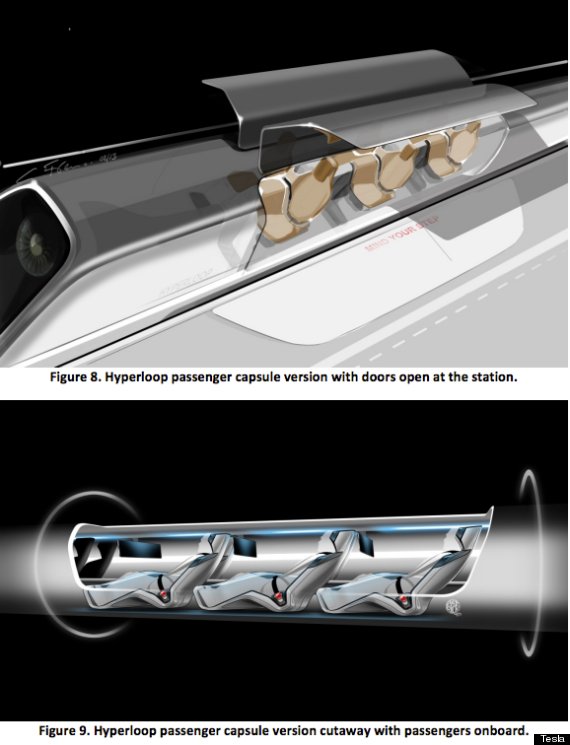 Musk is encouraging everyone to weigh in on the designs, requesting any feedback or ideas be sent to hyperloop@teslamotors.com or hyperloop@spacex.com.