Upon unveiling Hyperloop, a futuristic concept for high-speed travel that promises to turn the six-hour commute from San Francisco to Los Angeles into a 30-minute trip, billionaire industrialist Elon Musk was ready to answer what seemed like every conceivable engineering question. Experts, Musk knew, would want to know how Hyperloop, which would move passengers inside an above-ground pressurized tube between the cities, would deal with everything from earthquakes to air friction.

One thing Musk’s “alpha design” for the project did not take into account, however, is how to deal with fat people.

Initial schematics for Hyperloop unveiled Monday evening assume passengers and any luggage they carry will average about 220 pounds. The average American man, according to a Gallup poll conducted last year, weighs 196 pounds. Meanwhile, passengers would have to fit on a space less than 27 inches wide, less room than currently taken up by the average economy-class airline seat.

America’s obesity problem is by far not the most ponderous real-world challenge Musk’s visionary idea must overcome, experts with experience in major construction projects and industrial transportation told The Huffington Post. Business challenges could be just as weighty.

“Ignoring the physics of it, to make it viable, pricing would have to be astronomical to have a reasonable payback period,” said Zafar Khan, an analyst for French bank Société Générale who follows train and airplane manufacturers.

Khan further noted that, while future-facing projects like Hyperloop are the stuff of science-fiction fantasies, companies have had less-than-stellar records in pursuing grand schemes of this kind.

“You will remember the grand Eurotunnel project and what a mess that became,” Khan said, referring to a then-futuristic 1980s project to establish an underwater rail link between England and France. The Eurotunnel project devolved into a slew of lawsuits after revenue projections turned out to be far too optimistic.

For now, Musk has not pledged to build anything more than a prototype for the project, instead saying he hopes the engineering challenges and the actual task of building the transportation system will be taken up by other companies. Musk, who has said he's busy running electric car manufacturer Tesla Motors and space travel firm SpaceX, hasn’t put a timeline on developing the idea.

Jonas Andersson, an analyst who covers large construction and engineering companies for Swedish firm Nordea, said it was unlikely one of the multinational firms that could actually pull off a project of that scope would take on the challenge.

“My best guess is that Skanska would perceive the risks too high,” Andersson wrote HufPost in an email, referring to the world’s largest construction and engineering firm, which he follows.

Musk’s idea, with technology that incorporates aspects of Concorde jet engine mechanics and table hockey physics, is being championed as a new way of transport that would be cheaper than car, high-speed rail or jet travel over certain distances. Tickets on a Los Angeles-to-San Francisco shuttle would be about $20, according to Musk’s projections. Total construction costs to get the project off the ground could be as low as $6 billion, according to Musk’s plan.

Musk has told the press that he was inspired to come up with the idea for Hyperloop after learning of a current plan for a high-speed rail connection between LA and San Francisco. The price tag of that plan was pegged at around $70 billion.

“I’m just putting this out there as an open source design,” Musk told Businessweek Monday. At a press conference with reporters later, he noted, "Maybe I could do the beginning bit ... and then hand it over to somebody else."

It’s not to say that Musk’s idea is completely commercially unfeasible. An MIT professor emeritus who has been working on an idea remarkably similar to Musk’s told CNBC on Tuesday that he was getting close to commercializing it overseas.

“I’m talking to some people in China to make it workable there and put some money behind it,” Ernst Frankel, the MIT professor, told the broadcaster. 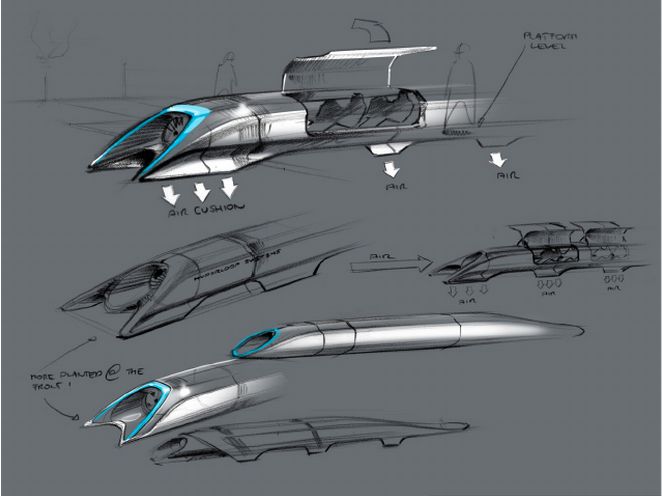