A new type of high-speed arms race is heating up between the U.S., Russia and China -- and it's threatening to go nuclear. Washington had always intended for the new "hypersonic boost-glide" weapons to remain purely conventional, but Russia and China seem to be pursuing nuclear variants. If the hypersonic arms race heads in a nuclear direction, Washington may be pressured to follow. Luckily, these new weapons systems are still in their fledgling state, so there's still some time to establish international norms. Washington, Moscow and Beijing ought to call a timeout on hypersonic glide vehicle testing and start talking frankly about the risks of the hypersonic arms race going nuclear.

The story begins right after the 9/11 attacks when some voices in the U.S. national security community called for fielding new conventionally armed long-range ballistic missiles to address time sensitive "niche" threats -- like terrorists at hideouts halfway around the world. The traditional nuclear intercontinental ballistic missile were seen as overkill and too self-deterring to use on such targets of opportunity. But it was mainly because Russia and China could confuse conventionally armed missiles with their nuclear counterparts that Congress initially withheld support for this "Conventional Prompt Global Strike" mission -- the danger of unwittingly starting a nuclear war with Russia or China was seen as too great.

In the meantime, an alternate incarnation has gained traction: the hypersonic boost-glide vehicle concept. Because the boost-glide trajectory is vastly different from the traditional parabolic path nuclear-tipped missiles follow, it's thought that a conventional HGV strike is not likely to be confused with a nuclear ICBM attack (see figure below). 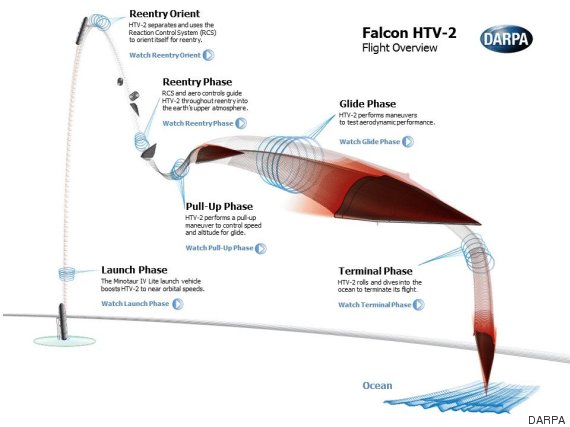 The flight profile of a typical hypersonic boost-glide weapon. Unlike a traditional ICBM which has a parabolic flight profile and goes well into space, the boost-glide vehicle glides at the top of the atmosphere for most of its flight path. DARPA.

Basically, after they're released from their rocket-booster, these weapons skim near the top of the atmosphere at speeds greater than 4,000 mph, gliding and maneuvering to their targets with high precision, instead of following a parabolic path like ballistic missiles. Russia and China are also in on the game but -- importantly -- may not be restricting themselves to conventional weaponry on their HGVs.

This HGV mission creep from conventional to nuclear should be nipped in the bud. If not, it may increase the risk of stumbling into a nuclear war -- the risk of accidental nuclear war is already high enough without introducing high-speed and stealthy nuclear HGVs into the mix.

Washington had always intended the new 'hypersonic boost-glide' weapons to remain purely conventional, but Russia and China seem to be pursuing nuclear variants.

Russia, in particular, may be motivated to develop nuclear warheads for its HGVs because such nukes would not count against the limits negotiated in the New START treaty. Nuclear HGVs would have essentially no arms-control constraints.

Not only that, but the flight profile of HGVs provides a natural immunity from U.S. ballistic missile defenses which have preoccupied Russian and Chinese military planners for decades. Because HGVs typically fly at less than 100 kilometer altitude, they are more difficult to detect by the long-range radars used to cue strategic missile defenses. This low altitude also happens to be well below the region where the midcourse ballistic missile defense interceptors work: HGVs will simply underfly American strategic missile defenses that attempt to intercept the warheads in space (>100 kilometer altitude). On top of that, the HGVs are maneuverable, which makes finding a firing solution for any type of defense virtually impossible.

Though new types of missile defenses like the THAAD-ER are being investigated to try to address the HGV threat they could, at best, only protect limited regions of the country in the vicinity of a THAAD battery. And even these new missile defenses could be defeated by decoys and by maneuverability just like the present midcourse and terminal systems.

Luckily, HGV technology is very complex and the vehicles are still in the developmental and testing phase, so there is still some time to discuss international norms governing their use. Strategic restraint here could benefit all the players.

Nuclear HGVs would have essentially no arms control constraints.

The difficulty of mastering the technology is evident by the various failed tests in the U.S., Russia and China. A notable U.S. success was the Army's Advanced Hypersonic Weapon: it was successfully tested in 2011, flying from Kauai, Hawaii and hitting its target at the Reagan Test Site on the Marshall Islands, 3,700 kilometers away. But there have also been several test failures -- HGV development is clearly still in its infancy.

The Chinese evidently have the best HGV test record so far: they've tested their DF-ZF (aka WU-14) HGV prototype six times in the past two years with only one reported failure. The latest Chinese DF-ZF test was just last week and was yet another success. The Russian test record has been more spotty, with all tests of their Yu-71 HGV in the past few years having reportedly failed.

Nonetheless, Russian ambitions for the HGV remain undimmed with Jane's Intelligence Review claiming that, "Russia appears to be considering the option of deploying its hypersonic system in a nuclear, as well as conventional, configuration," by the 2020-2025 timeframe. Given that Russian nuclear HGVs would not count against the limits agreed to in the New START treaty -- and presumably in any follow-on treaty -- it would make sense for them to plan to field such nuclear weapons.

HGVs are fast, difficult to detect and virtually impossible to defend against. In times of tension, it may be tempting to use HGVs to preemptively take out an adversary's offensive capability: for instance the U.S. may decide to target an adversary's ground-based anti-satellite weapon sites. In fact, this is among the "five representative scenarios" outlined in a 2009 Defense Science Board report. But because of the well-known compressed HGV timelines, the adversary may preemptively use their ASATs -- a classic case of crisis instability ("Use-it-or-lose-it") due to the short timescales involved.

HGVs are fast, difficult to detect and virtually impossible to defend against.

So the effect of the openly advertised compressed timelines for HGVs systems on competitor states' doctrines should be critically examined lest these new weapons systems result in a net decrease in U.S. security. Ironically, if the HGV arms race goes nuclear, this would obviate the reason we had for developing these weapons in the first place: to be able to tell apart nuclear from conventional delivery platforms by the very different trajectories. If HGVs go nuclear, all long-range missile trajectories could be seen as potentially nuclear by an adversary or competitor state.

Bans on HGV testing have already been proposed. Such arms control measures should be seriously considered -- but even if such test bans are not eventually adopted, the U.S., Russia and China could agree to some international norms keeping HGVs strictly conventional. And there's a collateral economic benefit: billions of dollars could be saved by sensibly scaling back the pursuit of nuclear HGVs.

The various arms control treaties negotiated between the U.S. and Soviets during the Cold War era -- and with Russia afterwards -- illustrate how strategic restraint can trump the short-term tactical advantages driven by technological exuberance. The last thing the world needs is a fast, stealthy, expensive and massively destructive nuclear weapon system on hair-trigger. The time to act is now.

Nuclear physicist, Visiting Senior Research Fellow at the Center for Technology and National Security Policy at the National Defense University