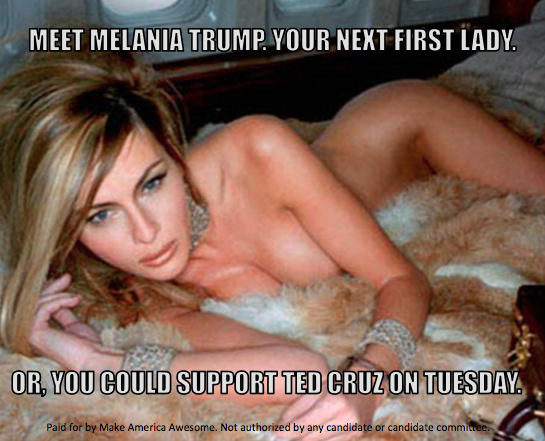 And yeah, sometimes a few of those things go to war with one another and other times they fit together like Laverne and Shirley. (Schlemiel! Schlimazel! Hasenpfeffer Incorporated!) Mostly, they just look at one another, laugh and go get drinks.

It's complicated. Except for when it's not.

This campaign season has been one in which the sometimes fragmented parts of myself are in simpatico. I may not know who I whole-heartedly want to win the 2016 election (I mean, unless the Kaling/Poehler ticket becomes a thing, because then I for sure know). But I am very, very certain about who I do not want as the next President of the United States of America.

I'm not going to run through all the reasons why I think The Donald is bad for my country...from immigration to women's issues to international policy, wiser heads than mine have picked him apart pretty thoroughly. #NeverTrump foreva, you know?

I'm not the only Mormon that feels this way.

Heavily LDS Utah holds their party run caucuses this week. Listen, Trump will lose in Utah. That's not really in question. Cruz will win. That's not really being contested, either. However, with every delegate as precious as my kid's nap time (Go to sleep. Mommy needs to drink coke while watching Jessica Jones ALONE. NOW. RIGHT NOW), the margin by which Cruz wins is hugely important to those who, you know, care about that sort of thing.

I'm not a Cruz supporter, but I get it. To trump the Trump you have to make the math work.

So what are the powers that be in the Grand Ole Party doing to get us Mormons to rally around Cruz? Appealing to us ideologically? Pragmatically? Spiritually? (Okay. Actually, Glenn Beck *might* be trying to get the corner on that last one. Bless his heart.) Maybe. I mean, it's possible that's happening. But it's hard to hear any of that very relative sanity over the roar of crazy coming from the latest attempt to reach the Mormon voters.

Make America Awesome started a Facebook campaign directly marketed to LDS Facebook users. Created under the direction of Liz "has Mormon family members" Mair, a few of the ads are exactly what you'd expect including the inevitable Romney shout out. (Who is going to tell all these political strategists that Mormons had political convictions before Mitt? Should I hold a press conference about it? Would it get media coverage if I invited Mitt to come up on stage with me? Wait.) Mostly, they seem like poorly written memes with emotional calls to action. You know, political business as usual. There is, however, one image that stands out from the solemn Mitts and smiling pro-life babies.

Per Mckay Poppin's Buzzfeed piece on the ads, "Mair said [the Melania ad] is being promoted on Instagram as well, but only to LDS women."

Ah, an old naked photo of a candidate's wife! How did Liz Mair know what to get us? But seriously. Why is she showing us this? According to Mair, "the Cruz campaign has turned the evangelical outreach into something of a fine art. We're not so sure he has LDS outreach locked down, though and this this is an area where we have a little bit of experience..."

You know who has a little bit of experience with the Mormon Utah Woman? Me! I was one for a full decade! I hate to blow up the focus group testing you did with your Mormon family members but, pardon my french here, this kind of shit does not play with my kind.

We've got plenty of issues as a faith tradition when it comes to women and their roles. My time in Provo, Utah was not without conflict and I can't say prevailing Utah culture and I agree on everything. But, and here's the Mormon God Has a Literal Body truth, there is not one woman out of the hundreds I got to know during my sojourn in Utah that would look at your Melania ad and think,

"You know, this picture of Melania has changed everything! I was thinking about going Kasich but the thought of Melania's perfectly pert ass in the White House is just the last straw. This cannot stand! VOTE! CRUZ!"

You know what a Mormons like me will think?

At least Trump is honest about his misogyny. You? You're a woman trying to convert women to your man by tearing down another woman. I can't decide whether that's masochism, sadism or a hearty serving of both. Those Utah Mormon women I spent a decade communing with and clashing against? They're going to think think you aren't really any better than the guy you're asking them to help you defeat.