Four months ago, after three long-ass years of waiting, I adopted a nice little half-black, half-Polish boy called Cameron. Despite the near-constant crying, I fell in love with this little shitter about two minutes after meeting him. Now, four months into my second go-around at daddy-hood, thoughts about him being black and what that means for him, and more importantly (jokes) for me, have started creeping into my otherwise occupied mind. November is Adoption Awareness Month, whatever that means, so now is a pertinent, maybe cathartic, time to write about him. 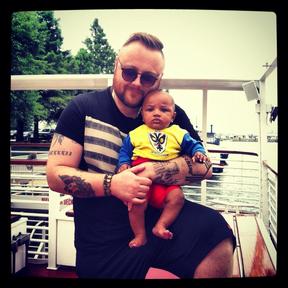 Instinctively, I am inclined to brush off his blackness as an irrelevance. This is really the ideal we're all looking for, no? I have often declared that race doesn't matter. At least it shouldn't matter. But I've been around this town too long to truthfully assert that easy shit.

The Trayvon/Zimmerman thing last summer viscerally evidenced two Americas. The not-guilty decision from my (and most urban, "non-racist" people) perspective redefined, for the present-day, racial judicial miscarriage of justice. For us, the verdict tragically supported an ugly impression that black kids seem to have less value, especially if they (OMG -- holy shit!!!) smoke weed, have some Instagram pictures of them flipping the bird and listen to the hip-hop music.

Pre-black kid, I wouldn't have paid much attention to this Zimmerman trial and its larger implications. Now, post-black kid, my 50-50 feelings of gut-wrenching-despair and horrible-homicidal-rage are impossible to ignore.

The adoption agency calls me having a black kid "conspicuous." While this label nicely exemplifies the gross "stakeholder" dilution of the English language to near irrelevance, it does little to nothing else outside of appeasing some kind of boring suburban white guilt, which I am not afflicted by.

When I tell black people I have a black kid a typical response is, "I hope you're going to teach him about black culture." My response is usually a trivial head nod, but what I really want to say (and sometimes if I'm drinking, I do say), "What the fucks does that mean?" I like Chief Keef "music." I admire Frederick Douglass. I'm familiar with the ideas of Marcus Garvey and Booker T. Washington. I like Spike Lee joints (especially Malcolm X). I don't really know what black culture means... If you can define it for me, go ahead.

It's a struggle (i.e. impossible) to define any culture without the broad brush of stereotypes. Although most of them have some kind of truth to them (British people are degenerate binge-drinkers), what's the relevance? How does any of that shit help me tell my half-black kid about what being half-black means?

I know my original inclination of color-blindness is basically pie-in-sky-worthless. But, despite that, I really want it to be true. Ultimately, and trite -fully, the only option is to take each day as it comes and try to expose him to and explain black stuff. Perhaps I need some kind of racial sensitivity training. But I wouldn't go, even if there was such a thing.

Him being half-Polish doesn't really burden my thoughts, but in this regard, I will be sure to let him know that Adidas sweatpants are not the only available garment to cover one's legs.