James Q. Wilson, the person credited with coining the theory of broken-windows policing, died last month and people are starting to ask what "Broken Windows" is all about. Those of us who have been identified as no more than a broken window are sick of it.

The broken-windows theory holds that one poor person in a neighborhood (or, using Wilson's words, "a single drunk or a single vagrant") is like a first unrepaired broken window. If the window is not immediately fixed, if the vagrant is not immediately removed, it is a signal that no one cares, disorder will flourish, and the community will go to hell in a handbasket.

For this theory to make sense, you first have to step far far away from thinking of people, or at least poor people, as human beings. You need to objectify them. You need to see them as dusty broken windows in a vacant building.

Wilson himself admits that his reasoning here seems unjust on the individual level, but goes on to argue that not dealing with a single drunk or vagrant who hasn't even harmed anybody may lead to "a score of drunks or a hundred vagrants" who could destroy an entire community or downtown business district. That is why we now have Business Improvement Districts (BIDs) with police enforcement to keep that neighborhood flourishing and poor unsightly people out of it.

There are now over 1500 BIDs worldwide and their number is growing.

And we are right back to Jim Crow Laws, Sundown Laws, Ugly Laws and Anti-Okie Laws, local laws that profess to "uphold the locally accepted obligations of civility." Such laws have always been used by people in power against those on the outside. In other words, today's Business Improvement Districts and broken-windows policing are, at their core, a reincarnation of various phases of American history none of us is proud of. 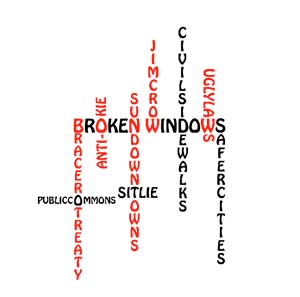 We have gone from the days where people could be told "you can't sit at this lunch counter" to "you can't sit on this sidewalk," from "don't let the sun set on you here" to "this public park closes at dusk" and from "you're on the wrong side of the tracks" to "it is illegal to hang out" on this street or corner.

Of course a tired shopper can sit on the sidewalk to rest between stores and the people that lined up for two days waiting to get the new iPod can loiter and none of them will ever be ticketed, moved on, or arrested. These are the civilized people; they are consumers. They are us.

The people these laws are enforced against are not us. They are them. And their mere presence makes us uncomfortable, so therefore they are not civil and need to be replaced with someone more like those of us who set the locally accepted obligations of civility.

I guess history really does repeat itself and that's sad.