Call me insane, but I'm spending the summer at a sleepaway camp in the Berkshires. It started with me doing a humor series called Jenny From the Bunk -- I Followed My Kids to Camp, Now What? I thought it would be interesting to see if I could survive being out of my mom element and routine, but I've realized that it's become so much more than that. I'm learning things about myself I truly never anticipated.

One of the things I'm constantly questioning at camp is my coolness. I don't mean that in a popularity way, I mean it in a, 'Can I hang with people who are younger?' way, specifically those who haven't had that whimsical childlike spontaneity sucked out of them and replaced by worrying about the whimsical childlike spontaneity of their own kids. As a somewhat neurotic mom, I often wonder if I've lost my energy, my spark... my ability to have fun.

When you're young, you like to tell yourself to never grow up. You say things like, Remember, never to be like that parent, that teacher, that authority figure. Remember never to punish your kids for such and such. Remember what it feels like to be yelled at to be talked down to... to be made to feel guilty and swear you won't do that to your own children. Pinky swear. It's like a note-to-self to never grow up.

The truth is, we all grow up, whether we want to or not. We realize why certain actions need punishing, we lay guilt from time to time, we get frustrated with our children and yes, we use phrases we swore we would never say like, "because I said so," and "Don't make me turn this car around."

Yesterday at camp, I saw a reflection of myself that was not pretty. It looked like this. 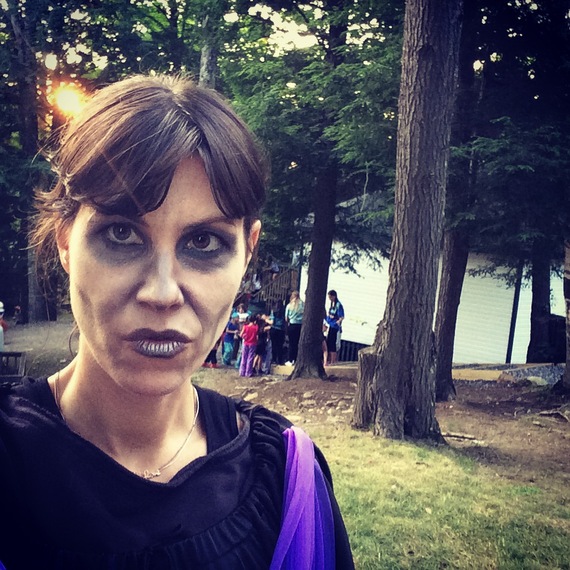 OK, to be fair I was at a camp event called Halloween in July and I was dressed as a demon. I volunteered to be a guide for this ghoulish night mostly because I thought it sounded scary and I wanted to be there to wink at kids when they were getting nervous. I wanted to be there just in case a mom was needed.

I said I would do it for the experience, but I'm not sure how much of that was true. When the girls heading up the event gave us the run down of the horror vignettes that would be occurring along a candlelit trail in the woods, I was terrified. I was concerned children wouldn't sleep for the rest of the summer.

I mentally wrote these counselors off as being insensitive, wildly creative, but insensitive and maybe a bit sadistic. They wanted to take the whole thing a step further and do something for the older kids that involved a realisticness that I was uncomfortable with. I watched as the girls explained it to one of the owners of the camp.

Phew, I'm so glad their running it by her, surely she'll give it the kibosh and I can come off looking like the cool mom who's up for anything. The owner squinted her face and I waited for her to drop the axe... "I love it", she said and suggested an addition or two. Am I insane? Why would you want to torture kids like this? I'm sure she'll neg the chain-less chainsaw idea, but she was equally enthusiastic about it.

I watched as the counselors got ready. I, too, got ready, but not in the way you do when you're doing it with all your friends. No, it will never quite feel like that for me here, but it was fun nonetheless. I asked the guy with the chainsaw if he had confirmed that it was harmless. "Dude, you have to test it." I said, "If you lose a finger, then you should probably pick a different prop."

The counselors around me laughed as creepy chainsaw guy pulled the starter. Another counselor grabbed a stick for the test, but chainsaw guy was already showing us how his finger was perfectly fine resting on the running saw. Not the most brilliant maneuver, but it reiterated why I needed to be there.

I made a couple other mommy comments about safety, all of which were prefaced with, "Not to get all Mom on you, but..." They thanked me, but I don't know if they meant it. The activity started and the first groups went through. They were young and shockingly not the least bit scared. It was dusk (so there was still light) and the scenes were toned down a bit. A couple kids held my hand, but for the most part they were unaffected.

As groups got older and the night got darker... and the scenes got more warped, I realized something important: These kids wanted to be scared... that was the point of the haunted trail. Yes, it seems like an oxymoronic revelation or maybe it was simply moronic. I thought I knew better than these young counselors, but they were the ones who knew better. They know the campers look forward to this night for 10 months. They know they can not disappoint them. They know what it's like to be a kid.

By the time I started guiding the older bunks, my eyes were dead. My tone zombie-esque and my commitment to my character unwavering. I didn't flinch, they cheered "Jenny From the Bunk" in my face and I didn't so much as blink. I told them that some may not survive. I told them to stay close because one person from each group gets taken by a counselor to be funny, but it's not funny to that unlucky person.

I listened as some yelled at each other to be more serious, saying things like, "I want to enjoy this experience." "I want to be scared." We saw people being pulled in body bags, weird bloodied counselors lurking and leering from all directions. the kids screamed. The kids cheered. The kids held each other's hands and grabbed at my elbows.

"Don't pull too hard my bones are loosely connected," I warned with an eerie calm.

Before the trail ended the guides broke character to tell our groups something "supposedly" serious which, long story short, ended with an exorcism the chain saw guy and running/screaming children. I ran along with them screaming, as if it was all real and when we got to the far end of the field, those screaming children clapped and cheered and talked about how that was the best Halloween in July, yet.

This was a good thing. I was proud to scare a bunch of sweet innocent kids. It was my absolute pleasure to do so.

Last night, I did something many of us parents don't do often enough... I remembered what it's truly like to be a kid. I got to turn off my parent radar for just a few awesome hours.

Today, the talk has been about how great last night was. I think the events coordinators need to start thinking about next year ASAP. I'm going to suggest a guillotine... and a cannibal scene.

Jenny From the Blog Bunk at Camp Lenox
Related Posts:

Gen Xers You Know You Went to Camp If...
Dear Readers - Day 1 at Camp - I Will Turn This Plane Around

Come follow the adventure on my FACEBOOK PAGE -- to get the full experiece HOVER OVER THE "LIKED" BUTTON AND PUSH "GET NOTIFICATIONS" I can't say what will happen, but it should be entertaining or I'll get eaten by a bear (either way it'll be fun to read). 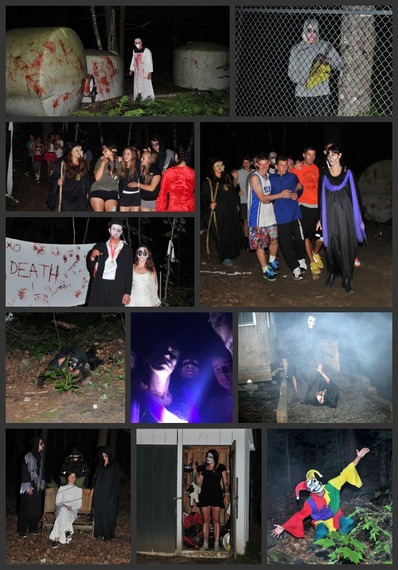 More:
Parenting summerParentsHumorcampers
Newsletter Sign Up
Raise the kind of person you'd like to know
Subscribe to our parenting newsletter.
Successfully Subscribed!
Realness delivered to your inbox