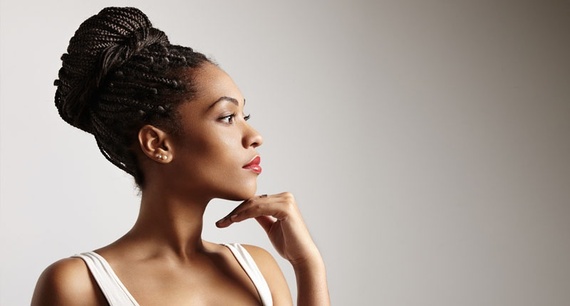 I am many things. I am the child of the Most High. I am the daughter of Alan Swift Jr. and Aretha Mitchum. I am an extension of the country roots, farmland and cotton fields of Little Rock, Arkansas, where my grandmother and mother were born. I am the generational piece that is tied to the suburban township of Abington, Pennsylvania, where a strong lineage of Swifts were reared and specialized in manual, service labor. I am the tangible representation and manifestation of humble, hard working men and women who worked with all that they had but were still able to give and love even harder. I am a writer, a journalist. A truth-seeker. A lover and fighter. Both peaceful and war-like. I am radical. I am bold. I am magic. I am Black. I am a woman.

I was always told I was a Black woman with a capital "B", even when I was just a black girl. I remember in second grade walking into my new classroom as a new student, excited yet nervous about the new students, new teachers and new friends that I would make at my new school. With my plaited braids and colorful barrettes, a wide gap-toothed smile and donning coke-bottle glasses, I stood in front of all these new faces. I sat down in my seat and smiled at the boy next to me, ready to make a new friend. Instead, I was met with eyes raised and disdain as the boy said to me:

"There is going to be a war between white people and Black people -- what side will you be on?"

Confused, I looked at him hard, with much uncertainty. "Who is he talking about?" "Me?"

However, it was at that moment that I became cognizant to the fact that I was different. That the boy looking at me was not just a boy but he was now a white boy. And all the other people in the room looked just like him. I was the only one who was different. In my particular case, it was the difference of being black that made all the difference to my peers; as I was tormented daily with the erasure of who I was and who I am because of the phenotypical nature that I was blessed with. However, at the time, I did not always see my skin, my culture, my ancestry and my people as a blessing.

Questions loomed around my Blackness -- from my hair to my speech -- to why I wore braids and how I didn't sound like I was "black", but rather I "talked white." The nuances of racist rhetoric and daily microaggressions of being both Black and a woman -- a Black woman -- have been incessant, annoying and at times, dismaying. Navigating in spaces where there are not many who look like me and combatting the negative epithets and attitudes because some are not accustomed to someone "like me" in certain spaces has had its toll. The daily assertion and advocacy for the inclusivity of my people in places where the perpetuation of the single story narrative of Africa and the Diaspora as impoverished, war-ridden, lazy, thugs and/or HIV/AIDS ridden can be both daunting and dismaying.

Being black, was considered a badge of shame, inferiority of victimization, of inadequacy, of divisiveness. Whereas now, I walk in unabashed, unashamed and unapologetic space of Blackness, it took a while to understand why I, the darker sister, was deemed inferior for the melanated skin that I was born with. There have been days that I become overwhelmed in seeing, hearing, and listening to the systematic oppression that has and continues to weigh heavily on my people. Whether it is the racialized state violence of those melanated peoples in Baltimore or in Bahia, Brazil; the genocide of the West Papuan peoples who are under Indonesian rule; the deportation of the Haitian based on the darkness of her skin; or the neo-imperialism, neocolonialism and the incessant theft of resources on the African continent, the implications of racism and prejudice are not only manifested domestically, but are representative of a global world order. In this time of modernity, it seems we are moving in the dynamics of racial antiquity rather than racial progress.

However, in wake of these injustices, it is with much tenacity and steadfastness, that I stand therefore and continue in the quest for the socio-political and economic advancement and freedom of my people. Through my experiences, I have found that when one walks in unapologetic, Black audacity, it makes some feel uncomfortable. My solution? Sprint. In everything I do, I sprint in the unapologetic, Black excellence that I am inherently connected to -- irrespective of the ancestral slave trade and the continent divide.

It is now, more than ever, that I know that I am truly, surely, thoroughly, soundly, undeniably, definitely, unequivocally, Black and unapologetic about who I am, what I am, and what I shall become.

So with this, I run in the extension of Queen Mother Yaa Asantewaa. I write in the fierce spirit of Countee, Ida, Marcus and Audre. My voice resounds like the fervency of El Hajj Malik El Shabazz and Assata. I work in the extreme diligence of those -- just as Kendrick Lamar so eloquently wrote -- who "made moves in shackled feet....Cape Town." I move and believe and breathe and know that with every fiber of my Black being, that I am the manifested and actualized dream, hope, tears and joy of the slave.

I am fiery. I am conscious. I am free.

I am that Black woman -- in all her unapologetic, melanated glory -- with a capital "B."