When I tell people that I make my living in botany, they often guess at what that means. Some have no sense for the word. Others imagine me on slow strolls through meadows, sniffing wildflowers and communing with songbirds.

I also often get asked if being a botanist means that I grow marijuana.

I have been asked this by folks of all ages and statuses, from "Joe Publics" on adjacent barstools to potential donors being courted at fundraising events. Once, on an airplane, I was drawn into a long conversation with a military veteran about the efficiency of hydroponics. Another time I was invited to jump in on a land deal so that we (my potential business partner and I) could start building supply in anticipation of "when the state finally makes it legal." This sort of thing has happened enough that not only am I unsurprised when it occurs but I have begun to anticipate that it will.

I don't find these questions offensive per se, and it's hard not to smile when such inquiries arise, but my smile often belies a shred of disillusionment regarding the perceptions of my vocation as something casual, "soft," or only interesting to the likes of Cheech and Chong.

Just to be clear: I don't grow weed. As a professor of botany at Bucknell University, I teach about plant biodiversity and conduct research on the ecology and evolution of plant reproduction. My field, botany, is a rigorous and exciting scientific discipline. It is broad and inclusive, encompassing the study of everything related to the plant kingdom, from the workings of cells and DNA to the role of plants as drivers of the planet's ecosystem and providers of global food supplies.

I am learning, however, that many of my botanical colleagues have also dealt with misconceptions about what they do. A short time ago I spent nine hours in a room with a group of botanical researchers helping develop a strategic plan for the next few years of the 3,000-member Botanical Society of America, including the challenge of increasing the visibility of botany and botanists. We even revisited the threads of an old conversation about whether to move away from the word "botanical" or to cease using the word "botany" as the name of the annual scientific conference we were attending at the time.

To my chagrin, many of the people in that room admitted that they have stopped self-identifying (or never did identify) as botanists, preferring to use descriptors that are both more specific and carry what might be perceived as more weight.

That's kind of too bad, I think. Our field has a deep history and an exciting future that deserve to be linked. It's in our interest to make it clear what botany means to us and what it is that we do as botanists.

I am a botanist. That might actually mean you could find me outside sniffing flowers. (I happen to love flowers.) But it is also just as likely that you'll run into me in my research lab, where we might use cutting-edge DNA technologies to link evolutionary history and genetics to figure out where that flower's smell came from. If I am not in the lab, check the rooftop research greenhouse, where we conduct experiments in plant reproduction, including pollination biology. I might also be in our herbarium, describing one of the new species we recently found on an expedition to Australia, or I may have snuck down the hill to further examine the impacts of invasive plant species on natural forest communities along the Susquehanna River. There is also a chance that I am farther afield, producing a new episode of the Plants Are Cool, Too! video series in an attempt to promote the impressive nature of Earth's leafy inhabitants.

All of this would qualify as botany. Still, when I first arrived at my university a couple of years ago and requested to have "botany" inscribed on the small placard outside the door of my lab, I was asked if I was certain I didn't want something "more fancy."

But "botany" is already fancy enough for me. (So is "botanist," for that matter.) 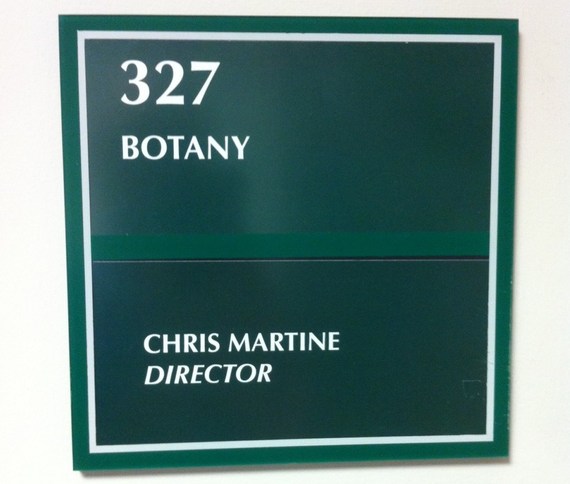 We should not be reluctant to embrace the one word that has always encompassed everything that we do: botany, the study of plants. Our work is critical to the health of the planet and the ages-old quest to better understand it. Our skills, our talents, and our passion are needed now more than ever. This is the time not for an identity crisis but for an identity rebrand.

No plants means no life on Earth. And we serve ourselves and the next generations if we focus attention and turn up the volume on our "quiet science." Be a botanist and an advocate for botany. But, above all, keep doing the progressive and exciting work you do as a botanical scientist -- and then share your discoveries with the rest of the world. We've got some great stories to tell.

And if you are not a botanist and you run into me someday, I hope that you'll let me tell you more about this engaging and dynamic scientific discipline that we work in. If you really have to, go ahead and make a joke about weed. But, after that, it's my turn -- and you might be surprised by how cool botany turns out to be.

David Burpee Professor and host/producer of "Plants are Cool, Too!"