I waited in line at American Airlines' terminal number four at LAX for 30 minutes before I stepped up to the counter. A shiny older man, who I would discover spoke four languages, smiled at me. I smiled back and then I began, "I am a jerk face. I missed my flight. I was told by one of your American Airlines team, over the phone, that I could be put on standby and get on the next flight to Jamaica -- and it shouldn't be a problem."

He took my gold membership card and passport and several long moments to stare the computer screen, "No, your flight was canceled by the computer."

"But the agent on the phone said I could go on standby, and this would not be a problem" 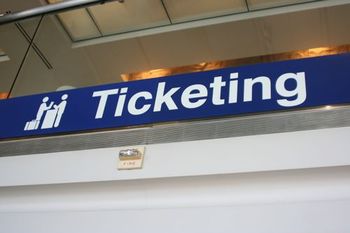 The shiny man leaned over to the supervisor next to him and said some quiet words, then he turned to me. "Let me see what I can do." He then clacked on his computer and then used the phone before more clacking and calling. "No. Your ticket is null and void." I took some slow breaths. He continued, "I think there was a change in policy that the operator did not know about."

Clack, clack clack. "That would be $1150." Then the shiny man clacked on the keyboard briefly and said, "But all flights are booked."

Before the new sticker price made me ill, I forged ahead. "Can I go on standby?"

"Does my American Airlines Gold Card help me?

"Can I speak with a supervisor?" While I never raised my voice, became sarcastic or condescending -- as it has never paid off for me in situations like this in the past -- I believe it is here that I probably became a nuisance to the shiny man.

"No. Nyet. Nein. Nah (I exaggerate). I can speak to the supervisor for you," said the shiny man. He leaned toward the supervisor and they exchanged more quiet words. Then, more keyboard clacking. The supervisor walked away without looking up or saying a word. The shiny man said, "I can get you a ticket for $451."

I ignored that all flights are booked and forged ahead again, "But, I was told that it was $250 on the phone."

"No. I'm sorry." He then explained that the price of the fare must have gone up $200 in the last hour or so.

The news was good, sort of. I was happy to pay for my mistake, but $451 was a little more than what I could comfortably do, especially with no available flights. I left a message with the firm I was working with to talk about options and listened to the sounds of LAX announcements, shuffling shoes and passing passengers, all sounding excited and exhausted. As I waited for the return call, a woman working behind the counter saw me and asked if I needed help.

"I am being helped by him." I said and pointed toward the shiny man, who was now explaining to a traveler that had been double-billed that there was nothing the shiny man, now glistening, could do to help. "But actually, I need to speak directly to a supervisor," I said to the woman. The woman wore a dress shirt with a beige suit jacket and looked, to me, to be a supervisor. She paused, smiled at me and went back to whatever she was doing. I walked away just as my cell rang.

After some coordination, the firm paid (with the same good humor) for my new ticket with my personal assurance I would pay them back the $451, in full, which is more than fair. I got back in line and waited some more.

Back at the counter, I stood in front of the woman I spoke to earlier. "I am here to finish my ticketing, but I would like to speak with a supervisor after we are done," I said. I decided to share my increasing desire to write about my experience with American Airlines, which had not been great. For the record, I never try to throw my travel writing weight around. My travel life has been filled with perks, but they already had $850 from the first payment and made it difficult just so I could pay them another $451.

I said, "I want you to know that I write travel articles and my intention is not to punish American for my error, but I do want readers to know about the difficulty I have had trying to get anything done and the inconsistency in procedure at the expense of your customers. What if this was my family vacation? It would kind of suck. Wouldn't it?"

"Why didn't you say so? I can help you. I am a supervisor." She introduced herself to me and shook my hand. I explained the situation. I can just have you pay $150 like you were quoted on the phone, the change fee." Then she leaned toward me, "But I am not doing this because you are a writer. I just want to do a 'good deed.'" I believed her.

Part two coming soon, because this is not the end of the story.