The other night on my way to bed, I walked to the thermostat to pop up the air conditioning. I do this every night, right after checking the locks, turning off the lights, and kissing the head of my sleeping son. It's part of my evening routine, and while my arm was reaching out to press the touch-screen button to cool my house down, my brain was thinking about the book I just bought and really hoping it was by my bed, and not in the front seat of my car.

I was on autopilot right in front of the thermostat, index finger about to beep-beep-beep--I remember putting the book in my purse after the doctor's appointment, but then I put it on the kitchen counter. I lazily gazed up and... 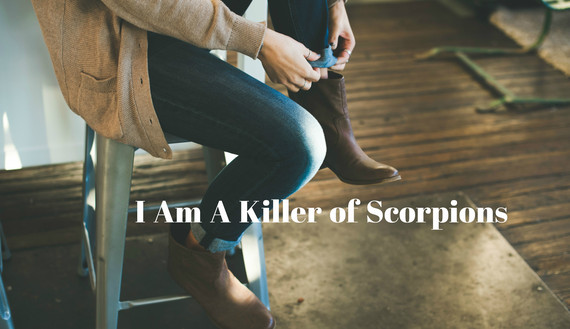 A scorpion was on top of the wall-mounted thermostat, about an inch from my finger and exactly at my eye level. It was wiggling its opaquely pus-yellow jointed tail around and being entirely repulsive. My body went into red alert, and I am pretty sure my heart flatlined for a second.

You have no idea how much I hate these creatures. Is there a word stronger than hate? Insert that. Yes, I know, they're living things on God's green earth and all that, but they are just so creepy. Judge away, but I am telling you here and now that if every single scorpion in the world died a gruesome, painful death, I would not feel a tinge of remorse. In fact, I would lead my fellow scorpion-haters in cheerful songs about freedom as we threw away our black lights and reclaimed our right to walk barefoot through our homes in the Arizona summertime.

But the scorpion population didn't die, and here was one right now shattering my inner peace and evening zen. I was terrified, but I know I could speak because I heard myself utter a long, very drawn-out F-bomb.

You're thinking, girl, you've lived in this house for 10 years. You've had a scorpion or two every summer, this isn't new. How right you are, but the difference is I was married in those past summers, and I am not married anymore. Married meant that I got to shriek and then yell for an immediate and fatal stomp by a size 11 cowboy boot. Married meant that if I was home alone, I threw a box on top of the evil doer, and left the situation to be handled later without my involvement.

I've been unmarried for several months now, and this scorpion was the most legitimate post-divorce test I'd been faced with to date. Managing work with a special needs tornado of a child? Reworking finances? Choking down disappointment and anger and resentment to show my son what decent and kind divorced parents can look like? Those were pop quizzes, people. This wall-climbing mother-trucker represented everything I wasn't sure I could handle, all my self-doubt about raising my son, everything I didn't think I was doing well enough as a single mom. This scorpion was my post-divorce final exam.

I needed to pass this test. I am woman, hear me roar...or at least hear me successfully choke down the bile that was rising in my throat. I walked briskly to my closet, looked at my shoe options, chose a seriously solid platform wedge and returned to face my demon. ONE (deep breath), TWO (raise the deadly shoe weapon), THREE (you really need to stop counting, Becca, or you will freak out and weepily fall into a puddle of despair), GO!

I knocked that little hellion off the thermostat and onto the floor. It tried to scurry away, but I was playing to win now. To hell with freedom songs, what came out of my mouth was nothing short of primal--AY-YAY-AY-YAY--and while I yelled like the deranged, female version of Braveheart, I swung that black patent, nail-head-studded platform wedge like it was a battle-axe and as if my life depended on it. Because it did.

The scorpion died on the first hit, but I gave it two more because I didn't trust it to not come back to life like the arachnid version of Jason. Three whacks, and this scorpion was toast.

Yessssss! I was victorious! I started doing my Dead Scorpion Dance (which turns out, looks a lot like White Girl at a Wedding Dance) when I heard a small, worried voice behind me.

I turned around, and my son was standing with his back against the wall in his pajamas, eyes wide and fearful. He doesn't like scorpions either.

He relaxed and smiled.

"Good job protecting us, Mom! You are a killer of scorpions!"

My son, my biggest cheering section, came and hugged me. I reminded myself of what I tell him on, at least, a weekly basis: Being brave doesn't mean not being scared. Being brave means being scared and doing it anyway.

With my left arm wrapped tightly around his little shoulders, I looked down at my right hand still holding the demon-killing shoe.

I can do this. I can be brave. I am a killer of scorpions.