The recent ban on the sale of beef meat in Kashmir, just on the heels of a similar ban in Maharashtra, has evoked a strong outcry, both on the jagged streets of Kashmir, and on social media. So-called progressives have been quick to criticize the beef ban as an affront to religious freedom, tolerance and personal choice. But it is paradoxical to talk of tolerance while turning a blind eye to the trauma and cruelty that the bovines face in the mostly unlicensed and ill equipped slaughterhouses in India. 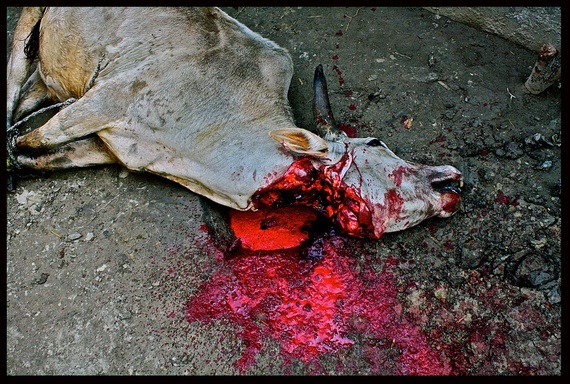 Studies have shown that cows and other farm animals have a high level of emotional intelligence, closely resembling that of humans. Yet, as a recent undercover PETA investigation reveals, cows and other animals in India's dairy farms live a horrific life -- tethered to short chains without shelter, denied basic health care, and constantly abused by workers, and die an even horrific death as they are skinned and dismembered, often when conscious and in full view of other animals.

As Martin Luther King once said, "Injustice anywhere is a threat to justice everywhere." Those opposed to the beef ban due to their convictions about religious freedom are not just condoning the cruel treatment of cows, but ironically and unwittingly, also the mentality that justifies discrimination of those different from us -- whether "those" belong to a different species or a different religion. It is a short slippery slope from discriminating against other species to discriminating against other religions and gender.

Some have criticized the government for focussing on cows, while so many people in the country are starving (although human starvation is never a concern when talking about designer suits or luxury vacations). But, human starvation is just another reason to reconsider raising animals for food. Every year cow's eat hundreds of thousands of kilograms of fodder, of which only a fraction is turned into human edible meat. If a fraction of the fodder consumed by cows is grown for human consumption, it can solve the problem of starvation.

To be sure, the incumbent BJP, which has close ties to Hindu supremacist organizations and had recently endorsed filing sedition cases against Kashmiri students for cheering for Pakistan during a cricket match, has an abysmally poor record on religious tolerance and personal freedom. The outrage against the BJP backed beef ban is understandable; India is a secular democracy and fanatics who seek to impose their religious choices over others have no place here. But the answer to the theocratic ban against the slaughtering of the Hindu sacred animal is not to oppose it, but to call for a wider secular ban against the inhumane treatment of all sentient beings, not as Hindus or Muslims, but as civilized humans.

Is cruelty a matter of personal "choice"? 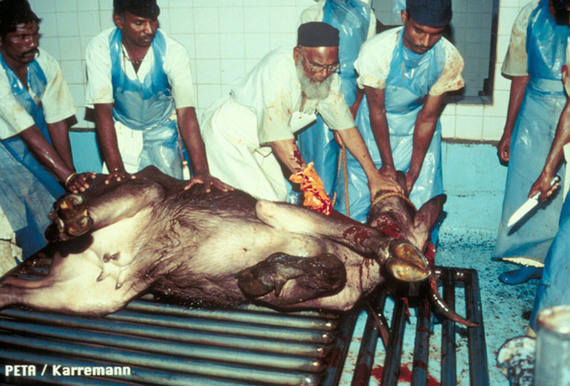 India is the birthplace of pioneers of non violence like Mahavir, Buddha and Gandhi. Ancient India under the rule of Emperor Ashoka was revered for its non violence and tolerance. It is time for modern India to become the first vegetarian country where all sentient beings can live a life free of violence, and lead the world on nonviolence and compassion. If India -- which has the world's largest vegetarian population -- can't, who can?