White privilege. A term that I don't even think I knew about until less than ten years ago and honestly didn't really believe in until becoming a public health nurse six years ago. I am ashamed that I once believed, not too far into my own history, that white privilege was something that existed only generations ago and had been eradicated.

Now, in my current work, I go into the places in my community with the most desperate of poverty and people of every color. I now see the evidence of white privilege every single day. I can no longer turn away and ignore that my pale coloring keeps me safer, allows me an easier time of gaining education and employment and allows me freedom from the fear of being harmed or killed because of the color of the skin that I was born with.

I woke this morning to the news that in the past 24 hours police have murdered two black men in our country. I say murdered because the evidence that we have in regard to both cases appears to show that neither man were doing anything at all wrong. I watched the Facebook Live video of the immediate aftermath of the police shooting of Philando Castile, a 32 year old black man who made the fatal error of perhaps having a broken taillight. Yesterday, I watched the heart-wrenching video of a 37 year-old black man, Alton Sterling-- shot while pinned to the ground and then watched in tears hours later as his teenage son broke down and wept while his mother cried out for these shootings to end. This trend of black men being shot down by white police officers is not a new trend--in fact it is rare for a week to go by in this country without seeing such an event.

It's a sickening realization that my white privilege allows me many things. However, the best of these privileges may be to not fear being shot down by those that are supposed to protect me. 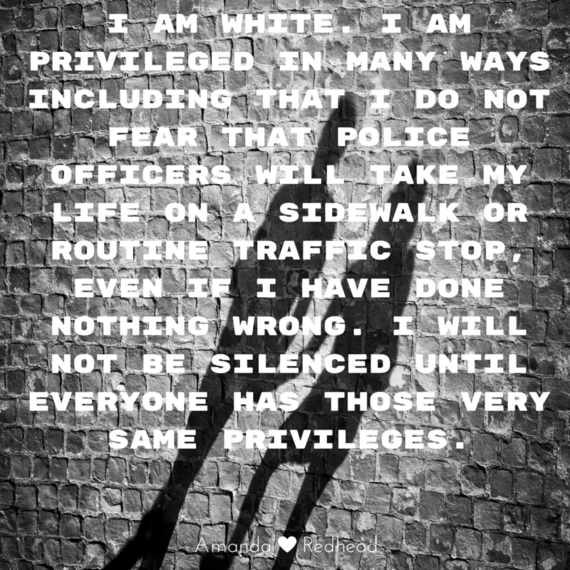 For many years, I have stayed relatively quiet about the things that I have seen happening around me in this country. I have felt that these losses weren't mine and I did not have the right to mourn these black men or feel enraged at the injustice against those of color in our court and jail systems or weep with great sadness after a day of schlepping through a low-income neighborhood full of undereducated people of every color but white knowing that the bright minds of the children I serve will likely never get a college education because of many factors, one of them being their very skin color. I have felt that it was unfair of me, as a white woman, to try to use my voice over the voice of those impacted as for too many years in this country we have allowed white people to be the voice of all.

What I am realizing today is that I can no longer be silent. The ideas that have kept me silent are ideas of separation and to eradicate the horrors of what are happening today, we must all stand together.


I stand and acknowledge that I have privilege over others in this country simply because of my skin color. My children have those same privileges. My oldest child is getting his learner's permit and is learning to drive. Soon he will drive on his own. I will worry about him as all mothers do. I will not, however, lie awake in my bed wondering if he will be pulled over for a busted tail light and end up dying in his own blood while his girlfriend and her daughter watch the life go out of his eyes. My son's privilege means that he will be frustrated to be pulled over but will not fear for his own life. My privilege means that my son can be pulled over and I will not fear to lose him, one of my children that I love more than myself. I will not fear that my son will be shot for selling CDs as he has done for years. I will not fear so many speechless things that mothers and fathers and sons and daughters must fear everyday. Mothers and sons all over this country do not have the simple privilege of knowing that the police are there to protect and not harm you. Even as we all acknowledge that 99% of our police force are honorable men and women in an intensely stressful job, we also must acknowledge that the 1% of racist and dishonorable men and women police officers are allowed to exist in a old boy's club where we have been taught to look away when wrongs happen.

I can no longer look away, even safe as I am in my white skin, safe as my children are in their white skin. I cannot look away even though there is a great underbelly of racism in the white community that is deeply angered and sometimes violent if we broach the subject-- My fear does not hold a candle to the fears that so many feel everyday. If we look away, we become a part of the problem as surely as though we held the guns ourselves. Young men are being murdered by those sworn to protect them. I will not look away. I will not. Not until every mother in this country can sleep with the knowledge that their sons will not be murdered for any tiny infraction. Not until the murders,these modern day legal lynchings with no consequences for the murderers, have ended. Not until every child has the same rights as my own.

I am white. I am privileged in many ways including that I do not fear that police officers will take my life on a sidewalk or routine traffic stop, even if I have done nothing wrong. I will not be silenced until everyone has those very same privileges.