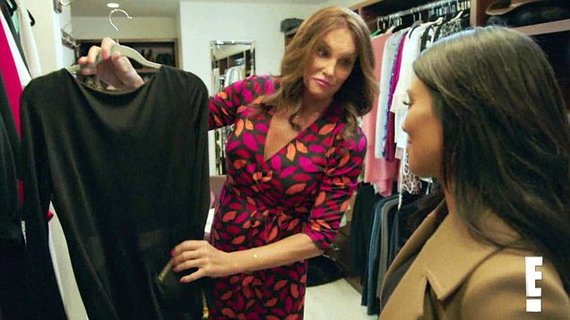 The other night I watched a marathon session on Bravo TV featuring Caitlyn Jenner, starting with About Bruce and then flowing right into the premier episode of I Am Cait.

She is Cait, but I am amazed.

Granted, I first had to get past all of the Kardashian-isms, particularly in the About Bruce episodes. They have been so documented, followed and paparazzi'ed that it's hard not to look at them through jaded eyes.

But I was amazed.

I was amazed at the rawness and the honestly that poured out of these people. Yes, they are reality show veterans, but this is the most real that I have ever seen any of them. You can't "act" those emotions and you can't script that dialogue, no matter who you are.

Here is a dad talking to his girls about the secrets and lies that he has held for his entire life, long before they were born and all during their childhood. With sheer honesty, they spoke about what they saw, what they knew, what they also kept secret, and what they speculated about as younger children.

This is his timetable, but as one daughter said, "I'm going through transition too."

I then to go on to watch Caitlyn meet her family for the first time, including the mother and sisters, which was also nothing short of amazing.

Transgender children and adults truly struggle with not only their own identity, but also trying to communicate with their families about it. It's got to be one of the hardest things to try to articulate and to try to gain understanding about.

I can only imagine.

As a gay man and gay father, I can relate to a certain extent. I too struggled with my own identity in my own way and then felt conflicted about trying to tell people. In many ways I still struggle.

It's not easy for any of us.

But here we are witnessing Caitlyn Jenner go through the process at the age of 65 to find her true self. We are watching her triumph, make mistakes, change her life, struggle and yes, ultimately, save lives.

I literally cheered out loud when she said that not everyone has the kind of resources, and money, and voice that she has. Which is why she is using it to help people.

This woman is saving lives.

As I watched the three hours of programming the other night, that is what kept coming back to me over and over and over again. I kept thinking about the hundreds and hopefully thousands of people who were watching as they struggle with their own issues, including being transgender or gay or disabled or hampered in any way.

We are all hampered in some way.

I kept thinking that this must be helping these folks. I kept hoping that it's helping them.

As tears streamed down my eyes and I thought about my own life, I know she has helped me too. And I know that this is exactly why I chose to write my own memoir about being a gay father from a time when it wasn't at all accepted or discussed (called Out and About Dad).

It's still not always accepted or discussed. In some ways it's gotten easier, and in some ways not so much.

Bruce Jenner was often quoted as saying that everyone should have a one-sentence mission statement. As a marketing professional who has also written a book about personal branding myself, of course I couldn't agree more.

Clearly, Caitlyn Jenner's mission statement now is all about helping transgender people and helping to save lives.

I really debated about whether or not I should release my own book about my own journey. Even after I wrote it, I almost didn't let the publisher release it. It took a lot of coaxing.

After seeing I Am Cait, I'm glad I did. All that book has to do is to help one person. It's the least I can do when I see what Caitlyn Jenner is doing.

While certainly not over, mission accomplished.