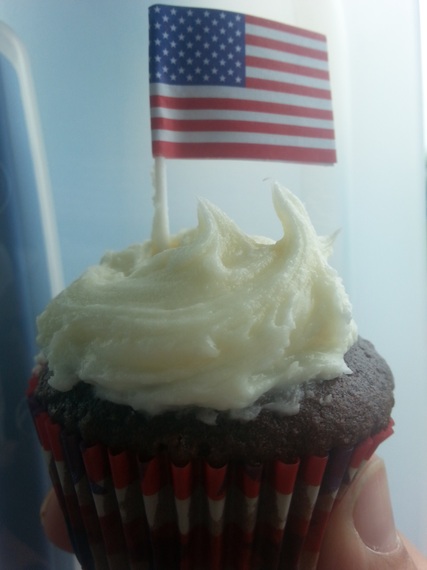 Early last Sunday morning, I was frosting a batch of chocolate cupcakes to take to church for fellowship hour. In honor of Memorial Day, I'd used Americana liners and placed tiny US flags on top of each. I imagined the kids at church enjoying the flags. My slight smile immediately dissipated as I reflected on the Latino (And Friends!) Play Festival we'd recently attended.

Memorial Day is a time to honor those who served and ultimately sacrificed their lives for our country. We remember heroes, and in doing that, I feel compelled to mention a few heroes who carry within them the strength and courage of the greatest warriors. Most in this group haven't medals, notoriety or even social security numbers, but they have battle scars that will undoubtedly remain throughout their lives.

Elizabeth, along with her Performing Arts class from Northfield High School, participated in a two week performance at the Northfield Arts Guild. Elizabeth warned us that the program wasn't appropriate for our younger two, but I finally decided we'd go as a family to watch the performance, regardless. I was sure to prepare Nikolas and Katerina beforehand, but none of us were quite prepared.

Traditionally, the Performing Arts class had been intended for Latino/EL students. However, this year the class had expanded to allow any students attending NHS, with the intention of allowing a greater interaction between mainstream students and minorities. Our daughter, Elizabeth, signed up for the class. Furthermore, the teacher had wanted to get immigration issues out to the public, and hopefully help with awareness.

We attended the event, last Friday evening, seated in a packed theater. Those mere ninety minutes will continue to impact and haunt me for the rest of my life. Standing before us were seventeen children, artistically sharing their real life stories and experiences over a tear-filled audience.

The pain from these teens possessed and enveloped our hearts, enraptured us as they confronted stereotypes, poverty, health care discrimination, suffocating oppression, molestation, bullying, murder, racism, rape, hopelessness, drug abuse and alcoholism, domestic violence, abandonment and eventually hope. Never, in my forty-two years have I witnessed a more heart-wrenching, powerful, deeply spiritual and aching experience, other than Katerina's battle with congenital heart disease.

Elizabeth had a few different roles, one representing an American teen raised on stereotyping, living in oblivion to the struggles of the world, belting out racist cliches and assumptions. Another role, which we faced as a family was health care discrimination. Katerina was denied health insurance by several big companies based on her "pre-existing health conditions." We wanted to buy our health insurance, and Katerina was blatantly denied. Obamacare to our family, represented freedom from discrimination. Finally, Elizabeth's main role was as a dancer being bullied and ostracized by her classmates, all of it genuine. Elizabeth's dream is Broadway, and she tapped away some of the tension of the program with "Don't Rain on my Parade."

A boy on the stage spoke of his mother being raped, and the bruises covering his own body the following morning, after a night of only remembering "the monster's eyes." A 15-year-old girl cried out, remembering the fear provoked by an immigration officer's badge, representing authority that would take her mom away, possibly never seeing her again. A once anger-filled teen had witnessed while a little boy, his father being shot and killed by his mother. The haunting voices and horrifying touching were expressed through a girl who had been molested by an uncle at the age of six (Katerina's age.) Another student, at 10 years, was raped by a man entrusted to smuggle him across the border, to be reunited with his mom. He'd only followed his mother's innocent orders to behave and listen to what the man said. I wondered how Nikolas would be affected by these tragic stories, and his dripping tears along his cheeks had spoken for him. We witnessed one story after another, taking hold of our hearts by these courageous children.

On that stage, through blurry eyes of tears, a shining aura of light surrounded the group of teenagers-they represented quintessential hope. These children stood on stage with pride, embraced one another, mourned together as they shared their pain and abuse, wiped the tears from their friends, now a united family. These heroes stood before us due to the heart and dedication of Jennifer Lompart, an NHS teacher.

Sitting in the front row was Mrs. Lompart, the hero who orchestrated it all. Throughout the program, a resounding and instinctive voice told me that some of these children's lives were saved as result of Lompart teaching this class. Most of these children hadn't shared their stories with anyone; abuse, pain and treachery resided within their guarded walls, a cancer essentially killing them. Lompart gave these students a voice, a safe place for them to shed their victimization and begin to heal. Jennifer Lompart wins Teacher of the Year Award this year, and every year after.

What does it mean to be an American? A hero? A human being? I don't believe that waiting twenty minutes in line at a Starbucks drive-thru with the engine running, ordering a five dollar coffee with a crown of whipped topping, then buying one for the next car, boasting about it on Facebook and hoping you get 180 likes, is exactly the definition. Those two coffees you just paid for cost more than double what one of the teens in the play makes hourly at Taco Bell, in which they share with their mother, hoping to get the bills paid by the end of the month.

Education is the key, yet the US government spends roughly 12 billion annually on border control, with continued abuse and barbaric practices in the Southern US. What a remarkable contribution that money would make instead to educate immigrant families, find them homes and jobs here in this country.

Love and humanity is in confronting racism, poverty and all that makes us squirm and look the other way out of discomfort. Excuses and delusion sweeps in and gives us reason to justify why we fail to embrace the uncomfortable, and instead look forward to what was added to the Netflix menu on our 55 inch flat screen.

I gazed down at my finished cupcakes-cute and promising sweetness. I suddenly felt ashamed. Here I stood in my semi-roomy kitchen, with cabinets and a refrigerator filled with mostly unnecessary food. I was bringing cupcakes to church, we'd add to the offering plate, dish out hugs and prayers and well, you know, "just doin' my part." I hold the door for people, shop at the Co-op for mostly organic and locally grown foods. I give a few bucks here and there to charity, box up old clothes, not caring if there are stains, because after all, it's a donation to charity. It's all one big fat farce. I am a white, educated, middle class American and as full of fluff as the frosting on the cupcakes before me. I am failing at doing my part as a human being. As long as racism, victimization, discrimination, immigration hostility, violence, poverty, homelessness and hungry children are sharing this country beside me, I might as well be a cupcake. When will a human life become more valuable than a dollar?

I will forever be haunted by the stories of the young heroes in which I had the honor to meet. My prayers go out to these children, that they never, ever give up and continue having their voices heard, regardless of what language they speak. They represent the future of America-by facing persecution, danger and risking their lives for freedom and a better life, entirely reminiscent of our forefathers.