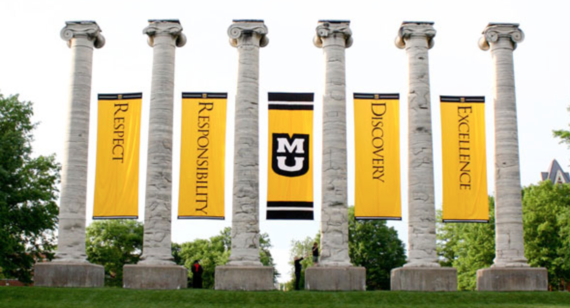 I am ashamed of my alma mater -- the University of Missouri. It may be a microcosm of the ugly reality in our country, but the reported racism that for years has hung over this conservative Mid-western town -- two hours down the road from Ferguson -- is shameful.

None of it surprises me, given my experiences there way back in the late 60s, early 70s. I knew the town. I worked many jobs there during six years of undergrad and later graduate school. I married a townie. One of the jobs I had in Columbia, putting myself through school, was at a clothing store up on Broadway. One of the old timers there told me a horrific tale one day about witnessing a lynching, when he was a teenager, where some sick, evil white folk tied a rope around some guy's neck, guilty of nothing more than being black, and tossed him off the railroad bridge that used to run by my old fraternity house on Stewart Road. Like it or not, Columbia has racist roots. I wouldn't be surprised if the assholes in the pick-up trucks that showed their true colors by flying Confederate flags or, even worse, have been tossing out racial slurs, are townies. Alas, matters not.

Tim Wolfe, the now ex-University President, grew up in Columbia. He's got Columbia's roots in his DNA, and he came from the corporate world. I'm not surprised by his utterly insensitive inactions -- until he was forced to take the ultimate step -- when his bottom line was threatened. His resignation "came from love?" Love of what, himself?

For what it's worth, an organization called Floating Sheep tracked racist tweets (that included the "n" word, etc.) posted online following the re-election of President Obama in 2012. They organized them by state. And guess what? The high number of racist tweets from Missourians ranked Missouri the 8th most racist state in the country, based on this data, behind Louisiana and Tennessee (Alabama was No. 1).

Even more shameful is that my alma mater has conveniently ignored these issues for years, refused to take any action until finally, and much too late, they were threatened with losing money from their football factory. They, too, have shown their true colors. They're in the collegiate business of generating revenues through sports. Educating students is clearly a secondary priority.

When they fly banners between their iconic columns in front of Jesse Hall that say "Respect" and "Responsibility," one wonders what they're talking about. Respect for what? The football team? Perhaps they should give more credence to "Discovery," and open their eyes to the insidious racism they're wallowing in.

Here's a recent article from The New York Times online.

I urge you to click on "what she wrote," in the second paragraph, and read what my dear friend Dr. Cyndi Frisby writes about her 17 years living in and teaching there, at their School of Journalism. Powerful, moving -- and utterly repugnant. Her experiences -- unacceptable. I've guest taught some of Cyndi's classes, and she is a beacon of light at the University and in Columbia. For her to be treated the way she describes is disgraceful, un-American, void of any kind of integrity or, God forbid, faith.

Young, bright, articulate Payton Head represents a glimmer of hope at the University. He's student body president, and an African American and, with 79 percent of the students there white, must have garnered significant support from his fellow white students, too, to achieve that office. Payton and his compatriot, Jonathan Butler, who launched it all with his hunger strike, have demonstrated incredible courage and conviction -- and stand as examples of outstanding character for the rest of us.

I've also had the great pleasure of sharing a couple of beers with Gary Pinkel, Missouri's football coach, and so I recognize the courage and commitment he is displaying now, in support of his football players, and the students, surely knowing he could be risking his own status with an administration that has its head up its ass, blind to the reality of what's going on.

Meanwhile the garbage continues to spew on social media, written by anonymous cowards who simply cannot fathom the idea of equality for all, less it threaten their own miserable lot in life.

I am ashamed of my alma mater -- but they are not alone, not even close. Enough! Enough already. When, at long last, will we pull our own heads out of our own asses and do something to address all of this? How many more of our brothers and sisters have to suffer the indignity of racism? How many more have to die at the clawed hands of bias, and inaction on any front by the rest of us, who choose to turn our heads and pretend it ain't there? How many more have to be denied a fair and equal opportunity to face life, fully prepared, and live it? A fundamental human right, or so we say.