Every reality show has a breakout star, and Chandi Moore has been that and more for the groundbreaking series "I AM CAIT". Chandi has been a voice of reason for Ms. Jenner (and for the other ladies) and given a perspective that some of the women may not have been aware of previously. That's the beauty of this show; each woman brings their own fresh perspective into the waters of which Ms. Jenner is learning to navigate, making for truly interesting television. Chandi sat down with us to chat about the new season of "I AM CAIT", her journey as a trans woman, and where she would like to see the trans community continue to evolve. 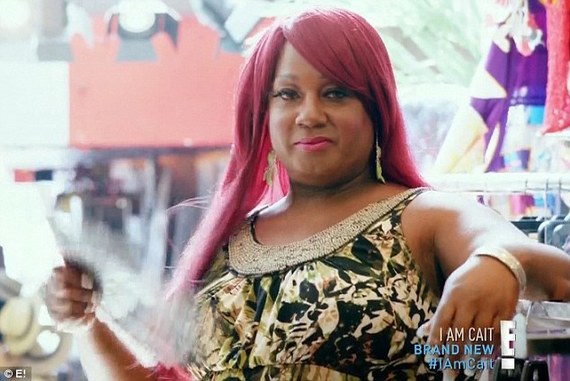 You were one of the breakout stars of the first season of "I AM CAIT". What has your journey been like as a trans woman both before and after "I AM CAIT".
Thank you so much! You know, I think it's been a long time in the making. I've been working in the world of prevention for at least ten years and I've managed to do alot on behalf of the community. I think being part of "I AM CAIT" has really managed to catapult me to the next level. It has really shown me the impact I can have on other people and it's been totally amazing.

You're also part of "Trans Girls In Action Divas" as well, correct?
Absolutely! Trans GIA Divas was started around intregal and was started by girls who wanted to do more work in the community. A good friend of mine and I started that and started working with other groups. We did feedings for the homeless, and really just tried to connect the community to the people even before the show. I never thought I would ever be on a platform like "I AM CAIT". That's why I try to be as gracious and humble as I can, because it's truly somewhere I never thought I would be.

Having the show be such a public platform and being such an intregal part of the cast really can be helpful for you starting the conversation about transgender in general. Do you feel the conversation can keep going?
Absolutely Everyone can say that they know someone trans now thanks to the show. Visibility has been one of the biggest parts and really made our community be more out there We're visible now; we're no longer hiding inside. We're "day walking" as they used to call it.

Everyone's journey regarding their gender is very personal and should be done at their own pace. How do you feel about your part of the journey being something that is so public and under public scrutiny?
You know I'm a very forthcoming person by nature. I feel you have to be open in order for someone else to be ok with themselves. They need to see examples that they can follow to show that they really can be open.

Have you had any truly amazing experiences with fans or the public since you've been on the show?
Well I've had a few people come to me in my life and let me know that me being out there have helped them be more open and face their own challenges. My partner does that for me personally. He reminds me daily that I am awesome and that is so important to have that kind of support.

I did have a woman come up to me at Sephora recently. We were looking at lipsticks and she came up and started talking about false eyelashes. She mentioned to her friend that she did not think she could do false eyelashes. I looked at her and said "girl give it a shot, you have great eyelashes and those will only enhance them". She looked at me and said "Chandi"?! We hugged and she was so sweet. It's just experiences like that, it's what people bring forth, that allow me to recharge. I remember those moments when I don't feel as awesome that I truly am.

It definitely helps to have someone in your corner who really supports you 100% also don't you think?
It has made all the difference to me. Embracing the whole situation and really being able to take it all on. Our relationship is fairly new, and we have been going at it for about a year now, and finally things have gotten to that point where the commitment has come into play and that's wonderful.

What can you say about the next season of "I AM CAIT"?
Well you know I can't say too much, but I can say that the next season helps everyone dive off individually ,featuring each of the cast members personally. I think it shows us individually, as well as how passionate we are about our community.

What has been one of the most joyous parts of getting to know Caitlyn Jenner?
The absolute best part about getting to know her has been finding out how big Cait's heart is. Her heart is in the right space and she is doing something that she did not have to do at all. She did not have to be part of this movement or be part of any of this at all. She could have taken her life and moved on in another direction. She chose to put herself out there. The most amazing thing to me about Cait is that she is okay making mistakes in the public eye because she feels that if she makes the mistakes, when she learns the "right way" the world is learning right along with her. That's such an amazing thing about her.

I don't feel that our community should hold her to a higher standard than anyone else that is freshly coming out. Many of us would not allow ourselves to be followed by a camera. I tip my hat to her for being willing to do this.

Much like gay people were 30 years ago, trans people are starting to have their moments and their own movements as it were.
Exactly. And i think it is time for our community to learn different ways to unite and be inclusive instead of finding ways not be inclusive of the full spectrum.

Why do you think the trans community kind of attacks their own sometimes?
I think it's because we need to heal. Healing is so crucial for our community. We have been hurt by so many people and not being accepted by the "LGB" only adds to that. Instead of being able to be inclusive of one another, everyone s always in attack mode, they cant help themselves. They can't embrace positive things for one another, but seem to be able to embrace those things when they happen for other people.

Where do you see Chandi in five years?
I want to be continuing to be able to fight this battle and make it easier for the youth coming up behind me. I don't want them to have to face these issues like I've had to face them. Hopefully in five years, the message will be totally clear. Everyone will be treated like a normal human being; everyone wont be treated as "trans" or "gay" they're simply be able to be considered people.

("I AM CAIT" is back for it's second season on E! on Sunday, March 6th. Check local listings)