What does it mean to be Black versus African-American? I grappled with this question years ago; for no particular reason other than to have clarity within myself. It is shocking how antiquated and "off the mark" the Webster and Oxford dictionaries are in defining Black.

WEBSTER DICTIONARY
often capitalized : of or relating to any of various population groups having dark pigmentation of the skin 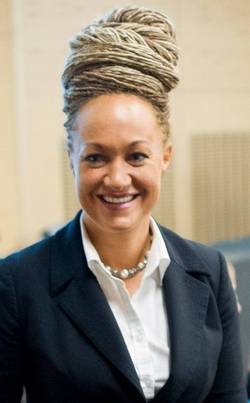 In a recent interview, Rachel Dolezal said that she identifies as Black, but does not call herself African-American. Yet, she also raises the question: "Didn't everyone's ancestors come from Africa?" The scientific answer of "yes" would give credence and allowance for her to recognize her African descent if she'd like - well, sort of, but not really...I am so confuzzled.

To me, Black has always been a feeling. In my very shallow and simplistic view, when someone is Black, no matter their complexion, they can relate to a struggle. This is not to suggest that all Blacks have experienced racism and discrimination (although most have at some point in their lives) but it is to say that at some point in your life as "Black," you know the feeling of being made aware that you are different than the majority or those in power. Black is a feeling of commonality with other Blacks, wherein someone on your family tree was plucked from his or her natural place to be subservient to another. For me, the Black feeling is not something I dwell on, but almost daily I am made aware of my African-American heritage, and for me that "awareness" is what makes me Black.

When my children were young, I never referred to people as Black or White. They grew up with other children whose parents believed that the Black and White labels were too complex to explain to a toddler who could readily see that people's faces were not the color of the black and white crayons in the crayola box. My daughters referred to people as the color they appeared: brown, tan and pink. I found it very difficult to explain, even as they grew up, why people of certain demographics were labeled Black, White, Red and Yellow, when they don't look black, white, red or yellow. It is very difficult to explain my "feeling" characteristic of Blackness to young kids who have experienced very little "struggle" as it relates to race (YET!). They know their history but they don't personally know the struggle.

Ah, a perfect segue into the complexity of the Rachel Dolezal identity crises. To help make sense of this nonsensical issue, I asked my daughters, ages 11 and 12, what they thought of Ms. Dolezal identifying herself as Black. (Often, children have an uncanny way of simplifying the most complex issues.) I read them numerous articles from credible sources and answered as many questions that I could regarding Ms. Dolezal's background, education, profession, family and current role as President of the Spokane Washington NAACP chapter.

Following are key points made during our 45 minute discussion. Disclaimer: At the onset, my eldest daughter was against Ms. Dolezal identifying as Black. Then I asked her to take into consideration her acceptance of Bruce Jenner, and all transgender people's right to identify as their gender of choice. As the conversation (which they led) evolved, their thoughts began to crystallize to form a few valid points.

I agree with my daughters' main point that it was disingenuous for Ms. Dolezal to assume a position as NAACP Spokane Washington Branch President under false pretenses. The NAACP has released a statement noting, "One's racial identity is not a qualifying criteria or disqualifying standard for NAACP leadership," thus supporting Ms. Dolezal. That was a good public relations move. Now, its Ms. Dolezal's opportunity to make the responsive public relations move to the NAACP's gesture of support: Ms Dolezal should resign.