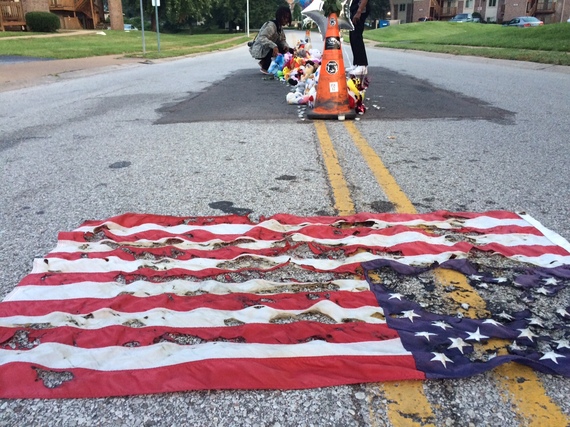 I am Darren Wilson.

Which is to say I am guilty in the slaying of Michael Brown.

Think of me as the guy who drives the getaway car - who provides the means of escape.

Or think of me as the guy who, with malice aforethought, plots to establish the means by which the crime can be committed.

Either way, I'm guilty as sin.

Last weekend was the first anniversary of Michael Brown, Jr's slaying. On Sunday morning I stood with clergy at the spot where his dead body lay for five hours spilling blood into the street on a hot summer afternoon - serving notice to others that this, too, would be their fate if their dared to, what, walk down the street in a way that raised suspicion in the mind of a white cop? Like the crucified bodies of insurrectionists that once littered the Roman landscape, Michael Brown's body lay untouched in the street as a witness to what white cops can do with impunity.

The message became clear: young, black men, don't piss off white cops. When you walk in the street, try to do so in a way that doesn't arouse the suspicion or ire of a white cop. You, too, will end up dead with no means of arguing in court that your death was anything but justified.

Take, for example, Ben Stein. When the public outcry about an unarmed black man being shot and killed by a white cop was proffered, Ben Stein reminded us all that being big and scary (which is to say "black") is the same as being armed:

"The idea of calling this poor man 'unarmed' when he was six-foot-four, 300 pounds, full of muscles, apparently -- from what I read in the New York Times -- on marijuana, to call him unarmed is like calling Sonny Liston unarmed or Cassius Clay unarmed. I mean, this... he wasn't unarmed. He was armed with his incredibly strong, scary self."

You don't need to thank me, Darren. In fact, I wish you wouldn't. You unilaterally determined that the young black man you saw walking down the street last August didn't deserve to live any more. I served as accomplice in the establishment and perpetuation of the culture which grants you your impunity.

My complicity ends now. I choose to break the silence.

I choose to turn state's evidence against you - to break the code of silence and testify both to my compliance and your guilt. I won't hide any longer behind the winking eyes of privilege that communicate our complicity in this.

You killed a man without warrant. There may not yet exist a court of law willing to hold you accountable for that. But if I have anything to say about this, and apparently I do, the court of public opinion will continue to add to it white allies who no longer choose privilege over justice. I hold out the hope that, while it appears that no jail cell awaits you, the punishment that ensues meets the measure of the injustice and indignity you perpetrated.

General Minister and President of the United Church of Christ