Walking up to the makeshift memorial, set up along the center line of the quiet street, I knew that I was on holy ground. Teddy bears, wilted flowers and notes on small scraps of paper told me that this was a place where tears were shed and hearts poured out. I felt quiet, respectful and a little like an intruder on this quiet Ferguson, Missouri street, surrounded by modest apartment houses. I was there to pay my respects to Michael Brown, the young, unarmed black man, killed by a cop who said that he feared that this 18-year-old threatened his life. This makeshift memorial, built on the spot where Michael's body lay for several hours, seemed to pull me inextricably forward as my mind tried to grasp what had gone on there.

And then I saw it: a cardboard box, four feet long and about 9 inches square, standing on its end, like a lone pillar. The cardboard box had been painted black, and written on it in gold paint were the words: "They tried to bury us. They didn't know we were seeds." 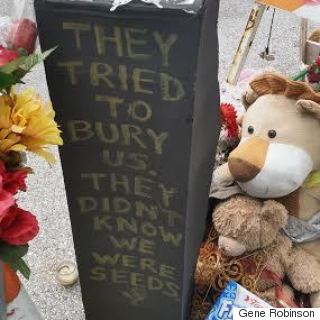 I was stunned -- by the power of these two sentences, and by the effect they had on me. Where did these words come from, and why hadn't they been reported in the countless hours of coverage I had watched on TV? Who wrote them, and who painted them in gold on this makeshift column?

I was changed in that moment from someone who cared (deeply, I thought) about what was happening to unarmed young black men in this country, to someone who not only believes that black lives matter, but whose eyes have been opened to what I share with the people of Ferguson, and Cleveland, and North Charleston.

What would I, a white, reasonably affluent, professional, gay man share in common?

Let me be clear: No one born white in this country can imagine the continuing price to be paid for having been an enslaved people.

That said, I grew up in rural poverty, and I know the cruelties visited upon those with the "bad luck" to be born into a poor family. Humble beginnings and uneducated parents introduced me to the classism we Americans like to think doesn't exist in this country. And as a gay man, I have experienced my share of bullying, threats of violence, degradation, neglect and boldface discrimination.

Having experienced a taste of discrimination as a gay man, personal and systemic, I'm given the tiniest window into understanding what African-Americans have lived with for generations. Most of what I know and understand about my own community's fight for equality comes from what I have learned from the black civil rights movement. So while the particulars are quite different, the operating principles of oppression are not.

And so, up to a point, I do feel an affinity with African-Americans and other oppressed minorities, yet remain aware that my white privilege works diligently to protect me from the full knowledge of the extent to which I am rewarded for the color of my skin.

I have to work hard to listen to the lamentations and stories of African-Americans, fighting back my urge to explain, defend and deny the judgments these stories level against white America. I have to resist believing, as I have been taught, that there is a level playing field in America. I have to fight hard to keep from believing those (even, and perhaps especially, President Obama) who say, "If you work hard and play by the rules, you'll get ahead." I desperately -- too desperately -- want that to be true. But I know it's a lie we tell ourselves in order to assuage our guilt and perpetuate a system that rewards some (like me) at the expense of the others.

I've discovered one other way in which I can, as a gay man, identify with African-Americans: Our resiliency. "They tried to bury us. They didn't know we were seeds." Resiliency is pushing forward, surviving, and even thriving despite the odds stacked against us. I now understand that the families of the nine slain A.M.E. parishioners in Charleston, who offered forgiveness to the murderer were not just doing so for him. They were defining -- for themselves -- their resilience by refusing to be done in by hate. It was a statement of grace. But it was more. It was also a declaration of freedom -- a fierce proclamation that not even this heinous crime will overcome.

It turns out that "They tried to bury us. They didn't know we were seeds," was borrowed from the 1990s Zapatistas' fight for indigenous people in Mexico. And the Zapatistas got it from the 1970s writings of a Greek poet, Dinos Christianopoulos, who was sidelined and marginalized by the Greek literary community of his time because he was gay. From a gay Greek poet, to Mexico, to Ferguson. We are connected. We are resilient. And none of us is free, until all of us are free.

This is the part of a series of posts by Auburn Senior Fellows of different faith and backgrounds who proclaim that when #BlackLivesMatter we will all be free. See also I am Black, and Black Lives Matter, by The Rev. Jacqueline J. Lewis, Ph.D.